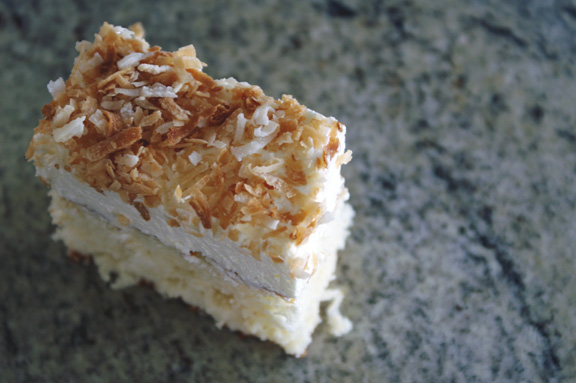 Welcome to our third installment of the Baked, Occasionally series – you know, the one where Natalie and I bake things from Baked Occasions and she tries harder than I do and it’s super fun? That series. So, remember when we baked that chocolate Texas sheet cake with the glorious peanut butter frosting, and at the end we told you that I had chosen the giant meat and cheese pie from the book as our next endeavor?

Hahahaha LIES! I was clearly delusional. That wasn’t going to happen, at least not now. Reasons:

So I checked with Natalie, and she agreed: we could change my choice for this month to coconut cake, which is infinitely more practical, since Easter dessert rules are pretty wide open around here, and I usually make these incredible little coconut macaroons anyway. 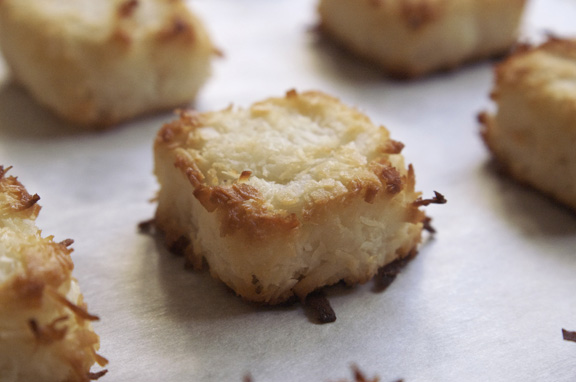 Easter was low-key for me this year: normally I do a massive spread, but this year was less elaborate and more focused on a few things everyone would like. This coconut cake was one of two desserts: the other was that strawberry pie you may have seen on my Instagram, if you’re into that sort of thing. 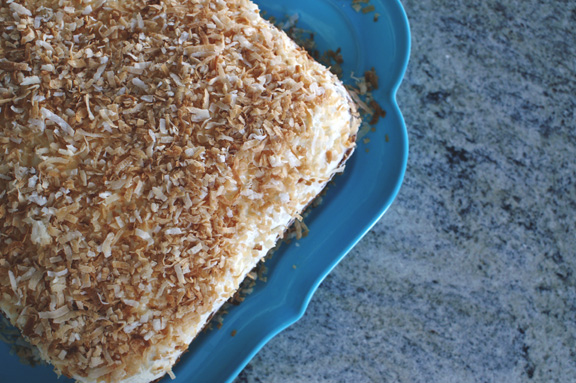 We’re here to talk about the cake, however, so let’s get to it:

As fate would have it, Natalie and I made this cake on the same day, which is the best because we end up baking together – in a way – thanks to the powers of the internet. After some discussion, we set out to work: she was going to maybe do the frosting the same way as the book does it (piping it into little dots across the entire top of the cake), I was probably going to top the cake with a ton of toasted coconut and call it a day. I also had major delusions of cutting this cake into three equal rectangles (it’s a 9 x 13 situation) and stacking it to make one rectangle layer cake a la Publix; that clearly did not – could not – happen.

The Cake – is really poofy. If you use a glass Pyrex baking dish, it will fill that entire thing once it bakes, and that is a wonderful thing. It doesn’t sink in the middle, so you have a nice flat surface to frost, and it releases really well from the pan, provided you did your buttering/flouring correctly. It’s a sturdy cake: we both agree this is as close to a pound cake as you can get without it actually being a pound cake, and it had fantastic flavor: the combo of the cream of coconut, coconut extract and flaked coconut is perfection, and the little bit of vanilla extract in here smooths the whole thing out. I was worried that the massive amount of flaked coconut in here would somehow lead to the cake being “stringy” or somehow difficult to cut, but my fears were unfounded: the coconut mostly melts into the batter, which has a dense but not heavy texture and a tiny bit of (very pleasant) chew from the coconut.

The Frosting – This is where I complain. Here’s what I’ve found after making maybe a dozen or so frosting or filling-based recipes from the Baked books: the baked goods themselves are epic and glorious, but the frostings and fillings can be a nightmare. I don’t mean they’re not tasty: they totally are (most of the time), but getting a decent finished product is almost painful, even for an experienced baker. They’re fussy, the chance of them being too loose or breaking is high, and I feel like overall it’s a lot of effort for a frosting. And I’m totally into effort, but I do believe that effort should result in something being measurably better than something I put less work into. And that’s just not the case here.

I felt like ultimately the frosting detracted from the cake’s flavor. I feel like it could have been less work. I feel like it didn’t have to wait to break on me until the last pat of butter went in the bowl…that was sort of insulting because I knew Natalie’s had broken, and I thought maybe mine was in the clear. But broken or not, the frosting just didn’t have the beautiful, rounded flavor that the cake did: it was heavy, a little greasy (3 sticks of butter = too much butter), and missed the mark for me. To be fair, Natalie liked it, and felt like it coordinated with the cake pretty well, but deeper conversations with her about his reveal that she is slightly nicer to frosting – in general – than I am. Frosting lovers: she’s your more reliable source on this. Frosting skeptics? Listen to my words. 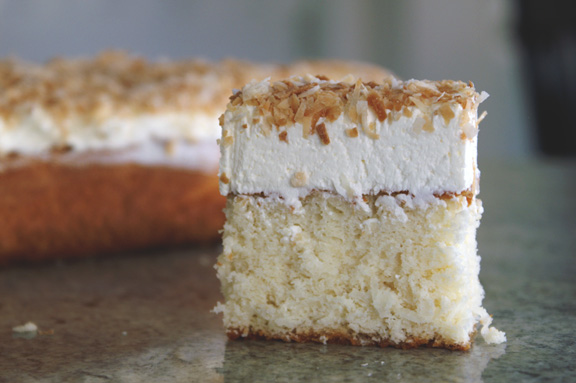 As I mentioned, we both broke our frosting. Although we are the same most days in every way, we took two different routes to solving this problem.

Natalie – really excels at un-breaking frosting; she even has a tutorial on it here, and it works, because Normal Me would take the time to fix it, as she did. Then she piped it all over her cake and it looked adorable.

Shannon – Was over it this time, and threw the frosting on the cake with what? Toasted coconut. Because it covered up my error and also, it’s delicious and every coconut cake should have a good deal of toasted coconut on it. I still say it couldn’t salvage the frosting, but it made it acceptable to serve.

Would I make this again? Yes to the cake, no to the frosting: there’s something nagging at me about it which generally means I know I could find a better match for the cake. I have a few ideas – one involving a rework of a certain Momofuku frosting I love dearly, and another that magically combines this cake, ice cream and chocolate ganache – which I plan to explore at a later date. Until then, I’d highly recommend this cake, but I’d stick with a frosting you’re comfortable with for the top. Maybe use a vanilla buttercream and add a little of the leftover cream of coconut and some coconut extract to it to coconutize it a bit. I’m going to give you the recipe for the frosting this one came with, because hey: maybe some of you like a challenge, and I’ll report back on future cake experiments. If the frosting breaks, head right over to Natalie’s post on how to fix broken things, and she’ll help you get your frosting back on track and looking lovely. Go look at her post on this very same coconut cake to see her results; you’d never know her frosting broke.

Adapted (only in the way that I did toasted coconut on top) from Baked Occasions: Desserts for Leisure Activities, Holidays, and Informal Celebrations by Matt Lewis and Renato Poliafito.

Preheat oven to 350˚F (for metal pans) or 325˚F for glass (I used the latter). Butter bottom and sides of pan, then lay a piece of parchment paper in it so the long sides overhang the edges: butter and flour the pan, knocking excess out.

In a large bowl, sift together flour, baking powder and salt; set aside. In a medium bowl, whisk together cream of coconut and whole milk; set that aside too.

Add the flour mixture to butter mixture in three parts alternating with the milk mixture, beginning and ending with the flour mixture. After each addition, beat for 10 to 15 seconds until combined. Remove bowl from stand and fold in shredded coconut with a spatula until evenly distributed.

Pour batter into prepared pan; place in oven on middle rack and bake until toothpick inserted in center of cake comes out clean or with a few crumbs attached, 40 to 45 minutes, checking for doneness at the 35 minute mark and rotating cake halfway through. Transfer to wire rack to cool completely.

In the bowl of a stand mixer fitted with the paddle attachment, whisk the egg whites and sugar together until combined. Set the bowl over a pan of just-simmering water, making sure the bottom of the bowl doesn’t touch the water. Heat the mixture, stirring occasionally, until sugar has dissolved and the mixture is white, 2 to 3 minutes. The mixture should be warm.

Place back onto the stand mixer and fit with the whisk attachment: beat on medium high speed until smooth and fluffy, 5 minutes. Remove the whisk attachment and place the paddle attachment back on. Add cubed butter a few chunks at a time, beating on medium-high speed until smooth and fluffy, about 5 minutes. If buttercream breaks, keep beating until it comes back together.

***NOTE: so, seriously – I thought I was in the clear with this until my very last butter chunk, which is when my frosting broke. And beating it didn’t make it come back together, although I’m assuming this does work sometimes. I’d say your best bet is to head over here to Natalie’s “unbreak my buttercream” tips which should help you solve the issue. Or just be like me and be like “whatever” and throw coconut on it.

Back to it! Add cream of coconut, coconut extract and salt and beat for 10 to 15 seconds to combine.

If you want to do this a la the Baked Occasions cookbook, head to Natalie’s post about this, because she did the little egg drops all over. To assemble it my way, simply lift the cooled cake out of the pan by the parchment handles, flip it over to peel off the parchment, then set it on your serving tray. Slap that frosting on using an offset spatula, whirling around the sides when you’re done to smooth the sides. Sprinkle with as much toasted coconut as you like.