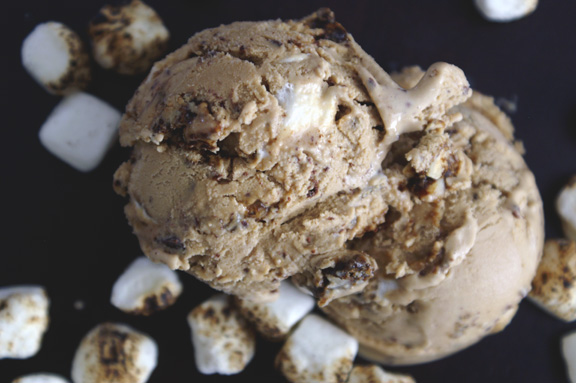 I like how last time I was all “Hi yay I think I’m ready to start blogging again!” and now, a month later, it’s like *crickets*

It’s the thought that counts, maybe.

I’m going to cross and un-cross my fingers a few time and say that I’m fairly certain i’ve wrapped my last feature for Feast for at least a few weeks. Decent timing, I have to say, because the holidays are just around the corner, and I have some cleaning / painting / organizing to do before people show up at my door. Until then, I plan on yes, blogging, for real this time – I received maybe 827 new cookbooks for my birthday this year, and I have yet to dig into them. it’s time.

As in the Jeni’s Spinalong, a.k.a the one thing I manage to make time for during the crazy. Maybe because ice cream is its own kind of comfort food, and the magazine never asks me to do an ice cream (although I’ve managed to sneak in two, here and here), but ice cream feels like a nice departure from the things I’ve been working on.

As you know, I do this with Natalie over at Wee Eats, and we’re doing a special holiday series based almost solely on our seasonal feels from September through December. There are so many feelings, it seems, that we have to explore over this particular part of the year, that we had to turn some of them into ice cream. This time, our feels took a decidedly autumnal / dark and spooky turn, which makes perfect sense, considering this may be the first whole month we’ve had in appropriately chilly weather with colorful leaves all around. I can see my breath now, which was always a milestone when I was in elementary school that winter had pretty much arrived.

On to the ice cream: what’s going here isn’t crazy, and neither is Natalie’s offering this time: seems as though we both found ice creams pretty close to perfect to use as our base. I chose the Blackstrap Praline Ice Cream from Jeni’s first book: it’s all dark and mysterious, and I couldn’t resist adjusting it just a bit for late October / early November. 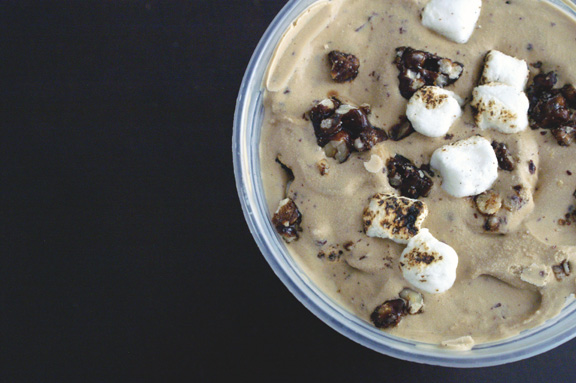 What you see here is a blackstrap molasses base flecked with shaved dark chocolate – a combination I find absolutely irresistible ever since I made these cookies the first year of the blog (almost exactly 4 years ago, in fact). After swirling in the chocolate flecks, I layered things up with a little praline action, opting for black walnuts draped in more blackstrap molasses versus your normal praline. Something about black walnuts reminds me of chilly weather, and this is the time we start to see them laying about on the ground. It’s also a tiny shout-out to my first Feast feature on black walnuts, which marks the first time I think I really understood what they were all about. Accompanying the candied walnuts is a singed marshmallow – not burnt, mind you, but singed with a blowtorch to freckle them with a little burn-y flavor but leave their gooey marshmallow centers fully intact. The combination of all the components together is pretty spectacular, I have to say. It’s brighter than you’d think, given all that molasses, and it feels like something which would happen if you charged Tim Burton with making a version of Rocky Road ice cream. This could be why I picked this, subconsciously: I make it a point every year to watch numerous Tim Burton movies over these very weeks, because Halloween.

In contrast to my stormy haunted castle ice cream, Natalie’s is all autumnal sunshine and warmth – everything delightful about fall tucked inside a creamy treat. In a surprise move, she steered clear of pumpkin, instead opting for Sweet Potato Ice Cream with Torched Marshmallows. I’m mad I can’t try it, because roasted sweet potatoes are my everything, especially this time of year. And lord knows Natalie knows how to torch a marshmallow correctly.

So there you have it: happy November 1! Can you believe it’s November 1? I, for one, can not. which is why I’ll leave this here for you and get back to work on being here more often. The best laid plans and all that.

Adapted from a recipe for Blackstrap Praline Ice Cream found in my most-treasured Jeni’s Splendid Ice Creams at Home by Jeni Britton-Bauer.

for the ice cream:

If you haven’t already, place your ice cream maker in the freezer to chill; just a reminder. In a small bowl, combine about 2 Tbsp of the milk and all of the cornstarch; stir together with fork until slurry forms, then set aside. Add salt and cream cheese to a large mixing bowl which is able to fit comfortably inside a larger bowl (for the ice bath).

Heat remaining milk, heavy cream, sugar, and molasses in a large saucepan set over medium heat, stirring often with a whisk. Once mixture bubbles, remove from heat, give you cornstarch slurry a little whisk to re-incorporate, then whisk into the milk mixture. Place back over heat and let come to a low boil, stirring constantly. Let boil until mixture thickens, 2 to 3 minutes. Remove from heat and add 1 cup of the hot milk mixture to the cream cheese mixture; whisk rapidly until cream cheese and salt have melted into the milk mixture and the mixture is smooth. Add the rest of the milk mixture and continue whisking until everything is homogenous. Fill a larger bowl with ice water and set the smaller bowl containing the mixture inside it, whisking occasionally, until the base cools to room temperature. Remove from ice bath and transfer base to refrigerator to chill, at least 4 hours or overnight.

Preheat oven to 350˚F and line a baking sheet with parchment paper. In a medium bowl, combine black walnuts with brown sugar, molasses, butter, cinnamon and salt: stir until nuts are incorporated and all ingredients are evenly distributed. Pour in a single layer onto prepared baking sheet, leaving some space pockets between the nut clusters. Bake for 8 minutes, stir with a rubber spatula, then bake for about 5 to 6 more minutes until nuts look caramelized (not always easy, considering the molasses starts off deeply black, but use your best judgement and don’t let them burn). Remove from oven and transfer pan to wire rack to cool. It’s okay if they’re a little sticky once cooled: I refrigerate mine as needed and then just run through them with a knife to break them up.

Getting the mix-ins done for this ahead of time is a good idea, simply because both need to be on the cool side to really work.

Chocolate Flecks – Take your chocolate and either chop it finely or do what I do and grate it using the largest holes on a box grater – because you don’t want to ruin your fingers, grate as much as you can and then chop the tiny bit you’ve been hanging onto using a knife. Place shavings in a small bowl and keep them in the refrigerator until ready to use.

Singed Marshmallows – Lay your marshmallows out in a small lipped baking sheet (a 9 x 13 works) in a single layer. Use a kitchen blowtorch to singe the tops of the marshmallows, blowing out any which catch on fire. Once cooled, toss them with your fingers so the bottoms of them are showing; torch again to desired “doneness.”

Remove your thoroughly chilled ice cream from the refrigerator and give it a whisk or two to incorporate. Spin according to manufacturer’s instructions. Once your spin is done, remove the canister from the base and throw in the refrigerated chocolate flecks; stir using a rubber spatula until flecks are evenly distributed.

Begin to layer your ice cream with the remaining mix-ins by first spooning a bit of the base into the bottom of your container(s). Add a few pralines and marshmallows over top, then add another layer of ice cream. Continue to layer as you spread out the nuts and marshmallows in the ice cream so that when scooped, everyone gets some of something; use as much or as little of the mix-ins as you wish (sometimes it depends on your container situation: I find with smaller containers I use a bit less than I would in one large one). Place finished ice cream in freezer to chill until very firm, 4 to 6 hours at least.