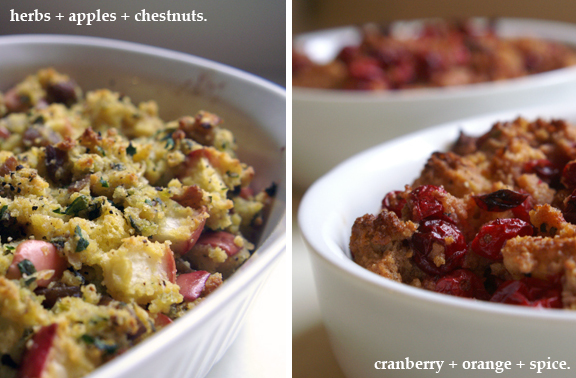 And welcome to Thanks-vember, when all I do is think about how delicious this year’s Thanksgiving celebration will be. To the first of two holiday food months, I thought I’d start with something I’ve never tried before: cornbread dressing. I’m also working to correct calling anything with cubed bread and seasonings “stuffing,” as I recently learned that the titles aren’t necessarily interchangeable. Whatever. We grew up calling it stuffing, in or out of the bird, and it’s a hard habit to break.

So, you don’t need a big backstory here. It’s November, and everyone is whittling down their holiday menus in anticipation of the big day. Maybe you have lots of people over, maybe just a few. Either way, stuffing/dressing will most likely be involved. So here we go: first, the cornbread.

It was a Nigella-vs-Martha cornbread throwdown in here. The apple/chestnut version was from this November’s Martha Stewart Living magazine, and the cranberry/orange one is from Nigella’s Feast cookbook. I won’t bore you with the details, but at the end of the bake-off, the winner was Nigella by a mile. Her cornbread was sweet (but not too sweet), flavorful and dense. It held together beautifully and had the perfect texture to make stuffing (dressing! ugh.) out of or eat with some butter and honey.

I began with the apple/chestnut recipe, which is Martha’s. After declaring her the loser of the cornbread battle, I felt she deserved at least a chance to redeem herself. I’m happy to say she came through with this dressing. The key to this one is prepping everything before you start on it. Have everything chopped, measured and ready to go and it’s a breeze; simply nothing to it. This one is sage-y and comforting and popping with that quintessential apple crunch I associate with Thanksgiving dressing. It’s what I consider to be the more “traditional” of the two, so if that’s your thing, this one is for you. 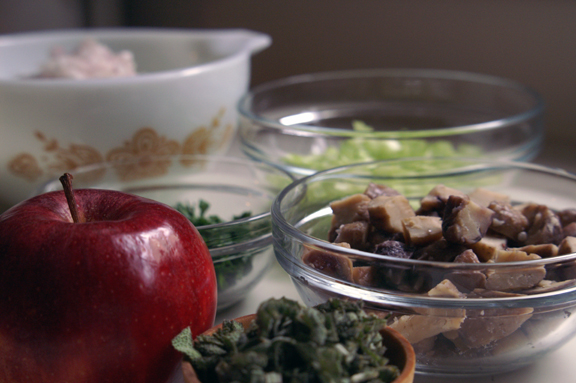 But; if you’re looking to try something different, please direct your attention to dressing number 2. I’ve been looking for a reason to try this one forever, but sadly, I’m not one who eats stuffing (!) at any time of the year but Thanksgiving. Maybe occasionally over the Christmas holiday, but not enough to call it a regular event. That may change with this particular version, which I think is very festive for either of your fall/winter holidays. 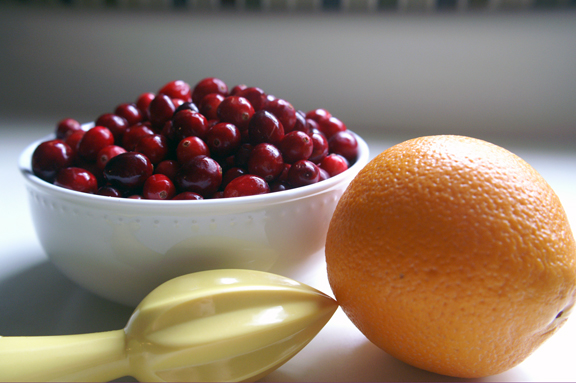 Again, a very simple recipe: what you see here is truly almost all that is needed. The trick to this one is to not overcook the cranberries. I had to toss my first batch because I did exactly that, and I knew the end result would look more like cranberry orange smoosh than it would look like dressing. Watch your berries after the 3 minute mark to be sure they don’t break down too much; you want them to still look like berries. Your end result will look as pretty as bright red holiday ornaments nestled in a cornbread tree. In my mind, this is a perfect way shake up your Thanksgiving menu, or to finally have a reason for a regular dressing appearance in December.

And there you have it. Two gorgeous ways to do cornbread dressing. or stuffing: either of these would be fabulous inside a turkey or hanging out alongside one on your table.

Now, pretend this is one of those kids’ mystery books where you make a choice and turn to the page associated with that choice. Start with the cornbread recipe to use for either dressing. I like to make the cornbread the day before the stuffing, especially if you’re doing this when you have guests. You have enough to worry about the day of a party, right? Let this be one less thing.

Now: pick your dressing flavor. One batch of the cornbread will fit either of these versions. I’ll start with the apple-chestnut, so if you’re doing the cran-orange, skip down after you make your cornbread.

Preheat oven to 400˚F. and grease…well, something. Nigella is right when she says in Feast that it doesn’t matter too much, as this will be used for crumbling up. A 9-inch square pan (2 inches deep) works. i used an oval baker I knew would hold.

Mix the cornmeal, flour, sugar, salt and baking powder in a large bowl. In a small bowl, beat together the milk and the egg, and add the melted and cooled butter. Pour your wet ingredients into the dry ones, stirring until just combined. Pour into the greased pan and bake for 15-20 minutes. Remove from oven and place on a rack to cool.

I don’t know about you, but I like to cube mine initially rather than truly “crumbling” it (see above photo). Cubing allows it to hold its shape better after all the ingredient-adding and tumbling around with melted butter. I roughly cube mine into 3/4 inch-ish pieces and use my fingers to break down the bigger pieces.

Preheat oven to 375˚F and butter a 3 quart shallow baker. Melt butter in a large skillet over medium heat. Add chestnuts, stirring occasionally until they begin to brown, about 8 minutes. With a slotted spoon, transfer chestnuts to bowl, reserving butter in pan.

Add onion, celery and shallots to pan; season with salt. Cook, stirring occasionally, until they being to soften, about 5 minutes. Add apples and continue to cook, stirring occasionally, until apples are soft, about 5 minutes more. Transfer to bowl with the cornbread. Add parsley, sage and enough stock to moisten mixture. Toss to combine and season generously with salt and pepper.

Transfer dressing to baker and bake until heated through and lightly browned on top (I like a nice crusty top), about 30-35 minutes.

For the cranberry-orange dressing:

zest and juice the orange. Put the cranberries into a heavy-based saucepan with the orange juice and zest. Bring to a simmering point on a moderate to high flame, then add the honey. turn down the heat slightly and cover, simmering for about 5 minutes. As I said above, really try to watch these after the 3 minute mark to ward off any mushiness.  Add the butter in slices and stir, off the heat, until it melts. Pour over your crumbled cornbread along with the beaten eggs and cinnamon and toss. Season with salt and pepper.

Pour into an 8 x 8 inch baker or, as I did, use individual gratin dishes, which work marvelously for this recipe, as it doesn’t yield a huge amount. I ended up with 4 individual gratins’ worth. Bake until golden on top (or more golden, rather), about 25-30 minutes.