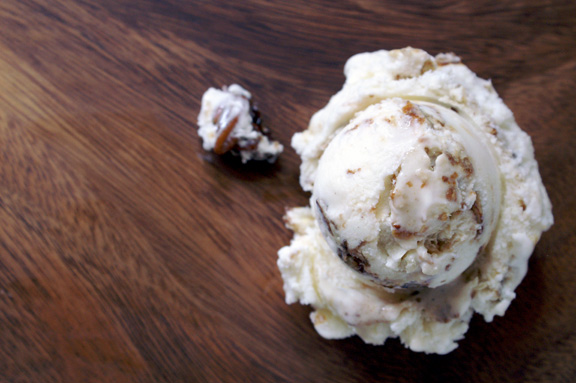 It’s March! Which I’m greeting with equal parts “yay!” and “wait, what?” because it truly feels like January and February flew by.

I had time to make you ice cream though! And so did Natalie at Wee Eats. We decided to do a little joint venture this year: a quarterly post where we decide on a theme, pick a Jeni’s ice cream as a starting point, and use our individual dessert superpowers to come up with an ice cream befitting the theme we have chosen. We call it The Jeni’s Spinalong with – quite obviously – Natalie and Shannon.

So, if ice cream were a (acceptable) choice for breakfast, what would it look like? What flavors would be the most appealing? What breakfast foods cross over into dessert territory? We attempt to answer these hard-hitting questions in the first installment.

And with that, we were off; promises made to each other to not talk through the initial process until we had each decided independently what our take on the theme was. The result? Two spectacular ice creams which could not be more different from each other, and yet both exhibit an intense love for the first meal of the day. 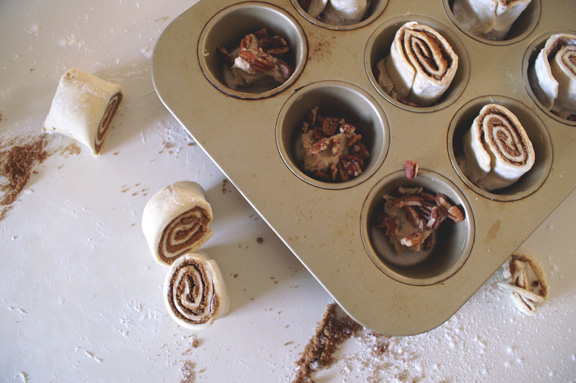 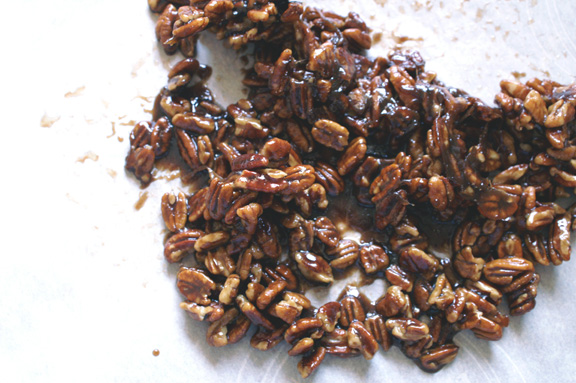 It’s worth noting that I tend to type “dream” versus “cream” whenever i talk about jeni’s, and for good reason; Jeni’s ice cream IS dreamy; dreamy to make (no egg yolks to fool with!) and an absolute joy to eat. Our chosen base – the Sweet Cream aka the foundation base for every ice cream – is a miracle of simplicity – it manages to taste good all on its own, and totally didn’t need us to mess with it. It imparts a subtle, fresh-cream flavor perfect for a breakfast pairing. And pair we did; here’s what each of us ended up with. 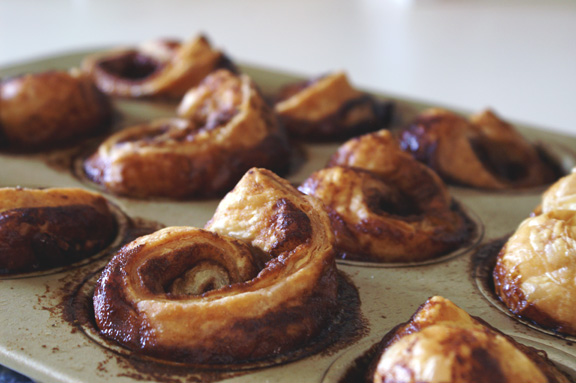 My approach to this was to throw some sticky buns and caramel pecans in there in the hopes that it tasted like (most obviously), sticky buns or (reach goal) Cinnamon Toast Crunch. Folks, i’m happy to report that it tastes like both: it’s got a solid weekend-morning-cinnamon-bun flavor with a hint of cereal finish, which means this would make a perfect brunch dessert. In real life, because I know none of you can actually eat ice cream for breakfast, no matter how much you may want to.

If you’re apprehensive about swirling chopped buns and caramelized pecans into ice cream, fear not; I have made you a handy how-to diagram. *trumpets*

Natalie’s Lucky Charms Ice Cream with Salty Cereal Gravel is the same sort of fun, but in a different way. Where mine is monochromatic and a wee bit stately, hers is off-the-charts fun and whimsical, and I can not wait to try it. Go read about her take on the Spinalong here, because it’s amazing, I promise. I drooled a wee bit when I first heard what she was doing, and I’ve been eagerly awaiting the recipe ever since. 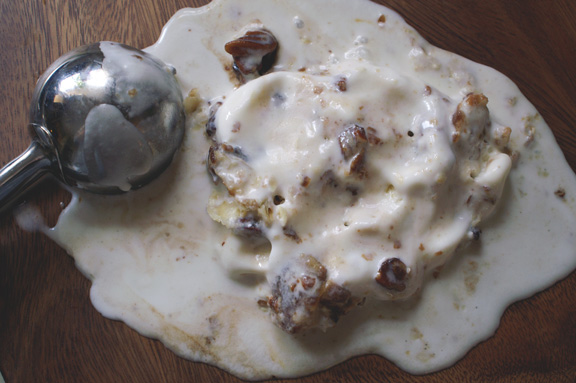 Next Spinalong? June, probably: this year we’re going for quarterly. If all goes well, we may aim for monthly in 2016.

for the sticky buns:

for the bun filling:

for the caramel pecan swirl:

*yo: I’ve noticed one thing since i’ve been making Jeni’s ice creams: the brand of cream cheese really makes a difference. Each brand has a distinctive flavor to it, and whether you notice it or not in other applications, it really comes to the forefront in ice cream. Use a quality brand you like versus going for the cheap stuff.

In a large bowl (remember, this is the bowl your entire mixture will ultimately end up in), whisk together the cream cheese and salt.

Pour a small amount of the hot milk mixture into the cream cheese mixture; whisk to combine until mixture is smooth and homogenous. Add remaining milk mixture and continue to whisk until everything is homogenous.

Now, two options: either keep the ice cream base in the bowl like I do and set it inside a larger bowl filled with ice and water (otherwise known as the ice bath), and stir frequently to allow the mixture to chill before placing it in the refrigerator, OR do what Jeni’s does and pour the ice cream base into a large (1 gallon) Ziploc freezer bag and submerge it in aforementioned water bath. Either will work: keep it submerged and add more ice to the bath as needed until the mixture cools down, then place in the refrigerator for about 4 hours or so to thoroughly chill; you can also leave it overnight, which I tend to do.

Preheat oven to 400˚F. You’ll be using a standard-size muffin tin for this.

Using an electric mixer (don’t be ridiculous; your stand mixer isn’t necessary here), beat the butter and sugar together on high until fluffy and combined, 4 to 5 minutes. Portion out the mixture evenly between 6 cups of the muffin tin. Divide pecans over top of the butter mixture.

Unroll puff pastry on lightly floured countertop, with seams running from left to right. Use a pastry brush to spread melted butter over the entire surface of the puff pastry. Whisk together the brown sugar and cinnamon, then sprinkle it evenly over the puff pastry, leaving a 1-inch border at the top. Starting from the bottom, roll the puff pastry tightly up tightly, pressing down gently to seal when finished.

Trim about a 1/2 inch from each side, then cut puff pastry roll into 6 equal sections; place spiral-side up onto butter and pecan mixture in muffin tin. Bake until dark golden and puffed, 20 to 25 minutes, being careful not to let burn on the bottom. Remove from oven and let cool for 10 minutes in pan, then turn out onto wire rack to cool completely.

In a medium heavy-bottomed saucepan, add butter, water, brown sugar, and cinnamon and heat over medium high heat until sugar has dissolved. Heat to a bubble and let boil, undisturbed, for 2 minutes.

Add pecans, stirring to coat with caramel mixture. Continue heating, stirring about once a minute, for 3 to 4 mites until caramel begins to cling to the nuts as you stir, being careful not to overheat. Mixture should be more like a thick syrup and less like a hard caramel; remember, it’ll firm up more as it cools, and your final result should still be pliable. Allow to cool completely before adding to ice cream.

I like to do this in a wide, shallow freezer-safe container, as my diagrams indicate. You can do it in whatever container you like, just make sure your layering takes your container size into account.

First, break up the cooled caramel-pecan swirl into pieces (as needed) and chop 4 to 5 sticky buns into quarters or smaller, if you like. Follow my instructions and diagrams above to layer your ice cream, swirl, and buns together; Start with a few pecans on the bottom, then a shallow layer of ice cream, scatter some bun pieces, then more pecan swirl. More ice cream, sticky bun pieces, pecan swirl, and so on and so forth until everything has been added. I like to run a knife through the whole thing to give everything a good final mix.

Place in the freezer and chill for at least 5 hours until firm. When you’re ready to serve, set the ice cream out for 5 to 10 minutes (generally this depends on your kitchen temperature as well as temperature outside) and scoop.