You guys: 9 people died over the new year in Japan, with 13 more people in serious condition due to mochi cake. Last year? 4 deaths, with 2 deaths the previous year. Seems as though mochi cake is so dense, so chewy, and so delicious that people consume it en masse this time of year, and sometimes too fast, which can lead to accidental choking.

Here’s the thing: I can see how choking could happen, but if you live in Japan and eat it all the time, I don’t know…be careful with your mochi, people, because it’s a dangerous and uncertain world out there. Japanese authorities recommend you chew it a bunch prior to swallowing, cut it into bite-size pieces before giving it to little kids or the elderly, and  – perhaps most importantly – never be alone with your mochi. 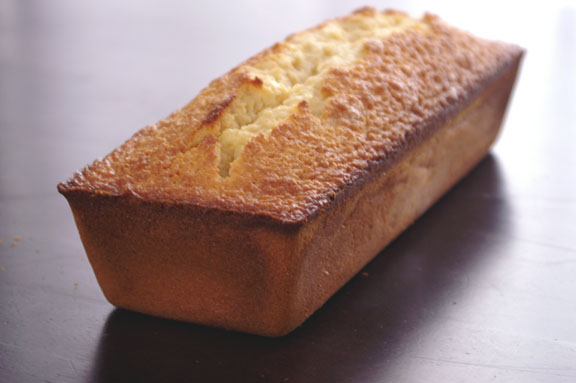 If I were to be injured due to mochi cake, it would most likely be due to quantity: I would just eat it until I was one big human-shaped mochi, because it is delightful. For those of us who love a thick, simply-flavored slab of pound cake, mochi is a textural masterpiece. It has a lovely balance of subtle sweetness to it as well, not at all cloying, just exceedingly sticky where conventional dense pound cakes are not. I hesitate to use the word “gummy” because it connotes something negative: there is nothing negative about this cake, in my opinion. The top bakes up crispy and golden, with that whole “dramatic valley of parting cake” crackle going on at the top, which I love in a cake. You can’t eat a ton of it, although you’ll want to: structurally speaking, you could build very durable houses with enough of these, and it’s going to feel that way in your stomach if you eat too much at one time.

Practical for a snack cake? Not really – it’s very rich, although in little doses I would argue yes. Rather, it’s the ideal foundation recipe for a cake you can really go places with. Perhaps one could use it as a means to infiltrate other dessert recipes? I think so, which is precisely what i’ll be doing with it. It’s from the Jeni’s Desserts cookbook, so I think the natural pairing here will eventually be ice cream. Perhaps chopped into cubes, toasted, and spun into a complementary flavor? I think so. For now, it sits in my freezer, waiting to be messed with.

And I will mess with it soon enough.

Since I’m getting back into the swing of regular writing, and I managed to keep my word count down in terms of cake, I thought i’d just write about general happenings.

Mr. Table informed me the other day that I may be the only person on earth who stops obsessively watching The Wire (for those of you who don’t know, it’s a gritty, Homicide-like, decade-old, Baltimore-based crime drama which could be the best show ever made) to catch up with the most recent season of Downton Abbey. Although it may seem disjointed to like those two shows, I think of it as this: I like quality television, no matter what it is. More than that, I think I just like exceptional storytelling, in all forms.

This is big news (only because it took so dang long) is that I’ve finally got a decent workout routine going. I had one prior to blogging, but between beginning the blog and raising a kid, I fell out of sync with it, and I’m happy to say I’ve kept at it enough for it to reach Official Habit status. I am just not the person who can get away with almost constant recipe-testing without some form of regular exercise, and it makes me very happy and organized and let’s be honest, probably a much nicer person through the day. You know what totally helped me get back into things? Great storytelling (again!), this time in the form of the Serial podcast from This American Life, because listening to it makes me forget I’m up at 5 am working out. If you haven’t heard of it, you should really check it out, and if you listen like I do and have a strong desire to repeatedly discuss the facts of the case with other Serial nerds, you let me know. I am here for you.

Audio podcasts (which I have just really gotten into in recent months, so pardon my noob excitement) in general are such a great way to do things while you listen to stories, by the way. I’ve always enjoyed audiobooks, but tend to relegate them to vacations or long car rides. Podcasts are kinda great when I’m in the kitchen, or just working on other things because they’re not as lengthy as a novel, and it keeps my brain thrumming without having to stop and look at something i.e. books or a screen. There’s definitely something about it that makes you appreciate and understand clearly why radio was such a big thing before television became a big thing: I daresay I prefer it because it lets your imagination out to play a little bit.

In other news, probably we’re moving this year: same city, different area, closer to the action, back to where we always lived until about 7 years ago. I don’t have words enough to tell you how thrilled I am about this; it’s a long time coming and something I look forward to with equal parts terror and elation. Thankfully, often significant stress plus hard deadlines make me operate like precision German clockwork, so I suppose this will be masochistically fun for me. I don’t know when everything will set into motion, but the clock is ticking on it and it’s going to be a massive undertaking: getting the house in optimal condition, packing things up, looking for the perfect fit for us. I’m sure I’ll occasionally need to vent, so expect that situation to pepper this space for months to come: lucky you.

The Wee One and I recently watched A Little Princess movie from 1995 (one of my favorite childhood books) and I noticed that the director of that movie was none other than…Alfonso Curaón. You know, that Alfonso Curaón: the one who directed Gravity, Biutiful, Y Tu Mamá También, The Assassination of Richard Nixon, and Pan’s Labyrinth, among others – some really highly-acclaimed movies I count in my list of favorites. Thus proving, I suppose, that everyone has to start somewhere. And honestly, watching A Little Princess again with adult eyes made me realize that it’s actually kind of a gorgeous movie: really stylized in the way that most 1990’s children’s movies are not.  If you like incredibly cinematic, sweepingly gorgeous films, this is your dude.

Speaking of The Wee, I’ve determined that more adults should listen to smart 4 year olds, because they have some great explanations for stuff that we can’t access with our knowledgeable and boring brains. She’s recently been asking about how babies understand things – like little babies who can’t say words yet – and I’ve been trying to break that down in a factual way that she can understand. Her takeaway from my thoughts on the subject? “I know how babies understand, Mom! You take words and you put them into kisses, then you give the baby kisses and they know how you feel.” Bingo, Wee One, you completely hit that one on the head, and you also made me spontaneously cry as I was getting my pants on.

I’m working on a project – a food project – and I can’t say much more than that about it, except to say you’re going to love it, I hope. The one problem with this food project? I had to visit my favorite international market – Global Foods – to do some research the other day. This is not really the problem: I would take a tent and live inside Global Foods because I could spend hours looking at the crazy stuff they have there: it’s like a toy store for exceedingly curious food nerds. The actual problem is in the section I actively avoid most days, which is, you guessed it, the fresh meat section. Because tripe, tongues, and hearts, y’all – and that’s just the stuff I could identify. For those of you who think I’m brave and eager to try anything, guess what: wrong. I have a clear line, and that line is raw and unusual animal parts. Mmmmmmmm nope!

So that’s what’s going on, people: it’s going to be a busy week of research, stuffing my fridge with a barrage of ingredients, and then cooking those ingredients into hopefully successful recipes to share with all of you. Until then, chew on some of this kochi cake…carefully.

This is the recipe straight from the Jeni’s Desserts Cookbook – so not even adapted because her flavor combos are always perfect and I felt no need to do that with this most perfect of straightforward cakes.

Position a rack in the center of the oven and preheat the oven to 350°F. Butter a 9 x 5-inch loaf pan if you want to be normal about it. For a more dramatic loaf, may I suggest a 12 x 5-inch loaf pan like this ravishing beauty I own from LeCruset. Natalie makes fun of me for it but it was worth every penny (also, I got it on sale for half off) – loaves bake perfectly into elongated slabs and then basically leap right out of the pan with the ease of a gazelle.

In a large bowl, whisk together the rice flour, sugar, baking powder, and cinnamon until evenly distributed. Add the evaporated milk, coconut milk, eggs, vanilla, and butter in a bowl, and whisk to combine. Create a small well in the middle of the dry ingredients, pour in the liquid ingredients, and stir with a rubber spatula until fully combined.

Pour the batter into the prepared loaf pan and bake for 35 minutes, then rotate the cake pan and bake for about 35 minutes longer, until a toothpick inserted into the center of the cake comes out with a few moist crumbs clinging to it. The timing with my elongated pan is the same as the standard size, but check things after about an hour in to see how everything is going. Cool the cake in the pan on a rack for 20 minutes, then invert onto a rack to cool completely.