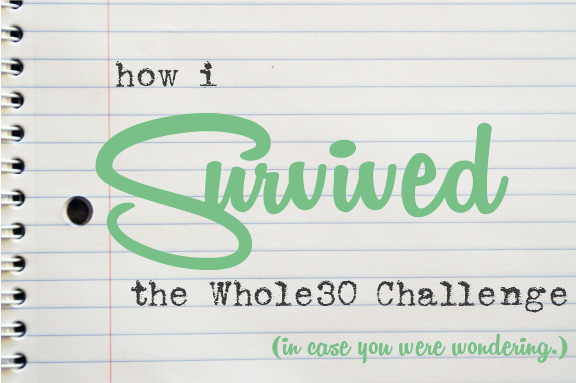 If you read my last post, I [successfully, miraculously} completed the Whole30 Challenge.* It was grueling, and it was not so grueling. It was hard at times, easy at times, and I would totally do it again. Some of you wanted to know more about how I did it (probably because you can’t quite wrap your head around how I could live life sans grains, sugar, legumes, et cetera for an entire month), so I thought I’d make a little guidebook of sorts to doing it – should you be so inclined – and also what I learned from the process.

Whole 30 ultimately requires you to commit, plan, execute that plan, and be mindful at all times of what you are eating. Or not eating, as is often the case. It’s not about starvation or about “dieting”; rather, I gave exactly zero cares about calories during the program. I ate each meal until I was full, and then I waited – almost no snacking – for the next meal. Rinse and repeat. It sounds like a “diet” at first, but it’s not really a diet as much as it’s just forcing you to be 100% clear on what you’re eating and when you’re eating it.

*I should note that in no way, shape or form did the Whole30 people sanction this. In fact, I would probably be on their list of the last people on earth they’d want to blog about it. Lest you were to think this is in any way sponsored, it is most certainly not. Just me subjecting my body to experiments.

Ultimately, the Whole30 forces you to change your perspective on food and allows you to view your personal eating habits through newly-objective eyes. It’s like that whole thing about not being able to see the forest through the trees: most of us simply have zero idea what we’re putting into our bodies every day. I’m a food writer, for heaven’s sake, so you think I’d pay attention, right? I do, but evidently I don’t pay attention enough. Much like Yoda, Whole30 brings to light things you should already know but have either been ignoring or have just over time become less mindful of. At least for me it did: I’m assuming everyone’s results will vary considering everyone has different “food weaknesses” to deal with. Here’s what I learned:

That’s it! Hopefully that covers it for those of you who had questions or were curious about how I managed to do something so utterly unlike me. If you have question, feel free (as always) to email or message me…whatever! I’m here for you.

We now return to our regularly scheduled programing. Because, food is fantastic and I can’t wait to make you all the food again.