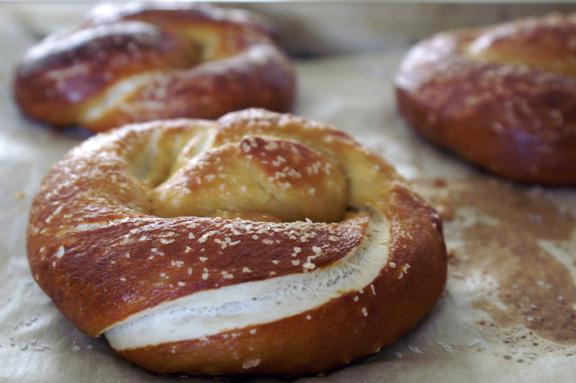 Many of you know I’ve been sporadically at work repairing my relationship with yeast. It’s no one’s fault, really; yeast things and I have just never agreed on much. For instance, I think when I make bread, or bagels, whatever, which involve rising and punching and all that, that they should actually rise; yeast doesn’t feel the same. While I would argue that I’m a decent cook and deserve for my yeast rolls to turn out soft and fluffy, yeast would counter that it would rather see my rolls become oddly shaped and have a density akin to wet sheep. It’s a dysfunctional relationship, to be sure, but lately it seems we’ve had a breakthrough.

People, take note: in the past few months, I’ve made 3 successful yeast-based things, none of which resemble a wet sheep. 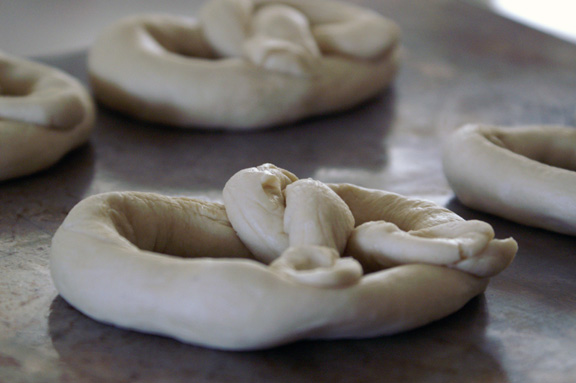 I still need to tell you about my cranberry walnut bread triumph, but I need better photos to do it justice; I’ll be remaking that one again shortly (what a shame! poor me.) For now, I want to talk about these pretzels. After I begged you to point me in the direction of easy, bread-ish recipes for me to make to garner a little more yeast confidence, Natalie at Wee Eats suggested her soft pretzels. I trust Natalie with a lot, but with pretzels, I was a bit apprehensive. You see, I’ve made soft pretzels before; they were horrid. Mostly, they never browned and tasted like bad, chewy air. It’s not that I didn’t trust her recipe, I just didn’t trust it in my hands.

But then something happened: I made the pretzels. And they were the best pretzels I’ve ever tasted.

I may have happy-cried a little bit when these came out of the oven. You know how sometimes you’re so convinced at every turn that something isn’t going to work out, you can’t get excited? I gently remind myself that I’m a yeast-idiot, and that it’s not the recipe’s fault, and even if they smell delicious that they’re going to taste like gravel. I refused to get excited about these. Until I ate one; then I got extremely excited, because they were a malty-shelled, pillow-soft ode to joy that I made all by myself. 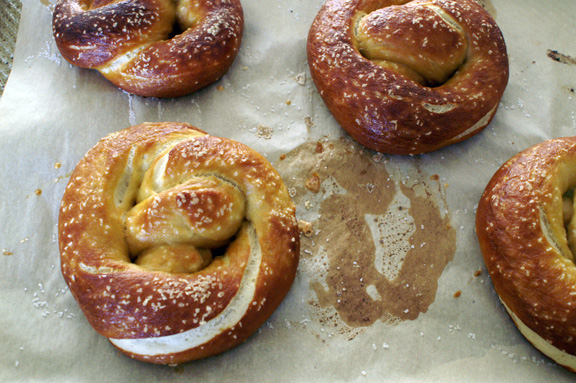 And a wee bit of a life-saver, might I add, because the original post I had for today fell victim to “I can not find my notes anywhere!” syndrome. I’ve been all a-frazzle since Friday, when I found out that I’m a finalist for the Riverfront Times’ 2013 Web Awards for Best Food Blog. That is huge to me, people; the RFT is a newspaper I spent a good portion of my teens and twenties (and still today) combing through to find what concerts were coming to town and what else was going on in my fair city. I have a lot of respect for them, so to say I’m thrilled? Understatement. And although I realize it’s cliché to say “I’m just honored to be nominated,” it’s actually the truth; even if I don’t take home the prize next week, the nod will be a massive source of pride for me. If I do manage to win Best Food Blog? Honestly, I’ll be happy if I don’t trip and fall over something on my way to the stage.

Because I was in a big old celebratory mood this weekend, I made these pretzels yet again, but this time as dunkable, Sunday afternoon football pretzel bites. To my delight, I found they worked just as perfectly the second time as they did the first: cutting the ropes into a dozen bite-sized pillows makes them a great football party snack. I wish I had a better photo, but it was late afternoon and I’m still on my nomination high.

And when you’re on a nomination high, you take photos like a baby goat.

As for Natalie’s incredible recipe, I didn’t change a thing to it, so just this once, I’m sending you elsewhere for it; her instructions got me through safe and sound, and I don’t have anything to add except to urge you to make these.

Here’s where you can find Natalie’s Soft Pretzel recipe. Take a little wander through her blog while you’re there (perhaps while you’re dough rises?), because she’s no one-hit wonder. You should be able to find a smorgasbord of sweet and savory recipes you’ll want to try.

If you’re wanting the bites like I made, follow her instructions up until you get through rolling out the ropes. Do it as she says, but then take a sharp, thin-bladed knife and trim the very ends of your rope (so your pieces will be uniform) and cut the rope into 12 pieces.

To cook, place a dozen at a time into the boiling soda water and stir gently for about 30 seconds, the remove with a strainer and place about 1 inch apart on a parchment-lined sheet pan. You should be able to fit 24 on a standard half-sheet pan.

Bake them for around 12 minutes or so, checking after the 10-minute mark. These do require a few minutes less time, so watch them and don’t overdo it. Serve immediately with any sort of sauce you dream up; they’re lovely plain as well.