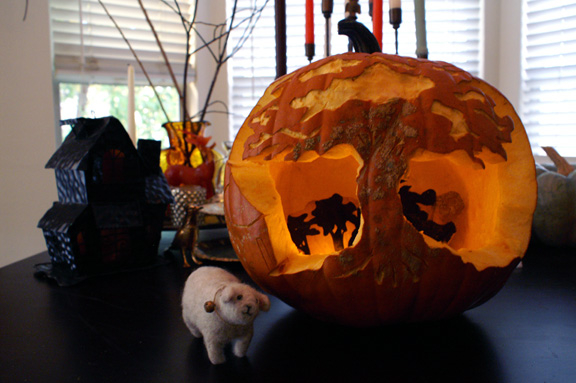 (It’s a chilly October morning. Shannon sits in her kitchen sipping her second cup of coffee, catching up on her reading and determining her plan of action for the day. In walks the Sheep which Movita Beaucoup made for Shannon’s birthday. They’ve been living together for a few weeks now.)

Sheep: Hey, Shannon. How did you sleep? 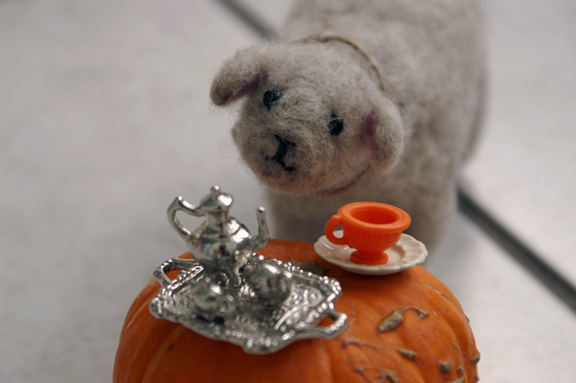 Sheep: But now that you mention it…

Shannon: (rolling eyes) So there is something bothering you, then?

Shannon: But Sheep; this is America. The streets are paved with gold here. Sure, Nova Scotia had harbour seals, a nearby sea, and a profound use of the letter “U” in lots of words; frankly, I’m a little jealous of that myself. What exactly do you miss?

Sheep: And I had friends there.

Shannon: That’s not what I meant; don’t get your wool all knotty. (silently giggles at her own joke.) I didn’t realize you had a crew, you see.

Sheep: I did. And I miss them, and I’m just dealing with that right now.

Shannon: Would you feel more at home if I named you?

Sheep: (hesitantly, and with hope) …why, yes; I think I would very much like that.

Shannon: As luck would have it, I’ve been trying to think of the best name for you. I think I’ve got it. Do you like the name ‘Charlotte?’ I could call you Lottie for short.

Sheep: I do like the name Charlotte! And Lottie has a nice ring to it; it sounds sophisticated.

Shannon: I agree. Charlotte it is then. We shall call you Lottie from here on out.

(Lottie, née Sheep, still looks a little glum, although her spirits have visibly improved. There’s still something she wants to say.)

Shannon: (looking up) Soooo…Lottie; is there anything else bothering you?

Lottie: Welllll…I was thinking I wouldn’t mind a living space of my own.

Shannon: Oh, well of course! I guess I never thought you’d want your own quarters, but I can see how you would want a little privacy at times. I’ll get right on that. In fact, since Movita is having her pumpkin carving contest, and you’re a farm animal, I have the perfect thing. Let’s get to work. 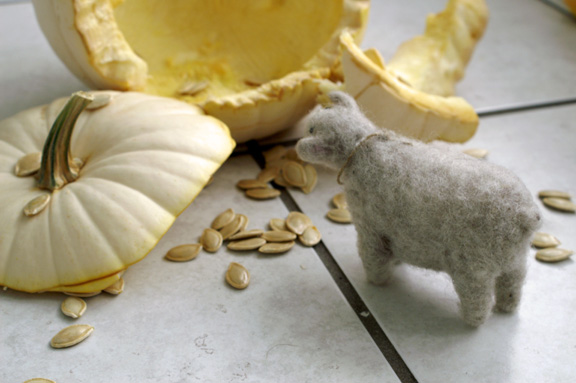 It starts to go horribly, horribly wrong. There’s arguing, and both are emotional and exhausted. Lottie blames Shannon for her utter lack of carving skills, Shannon doesn’t appreciate Lottie’s tone and lofty demands. A ruined pumpkin drops to the floor with a loud thud. They stop. At once, they realize arguing is stupid, and they need to work together. Lottie wipes away Shannon’s tears, and they begin again.)

Shannon: (after a few more pumpkin disasters, but this time with no yelling) Lottie! It looks like we’re finished with your new home! What do you think? 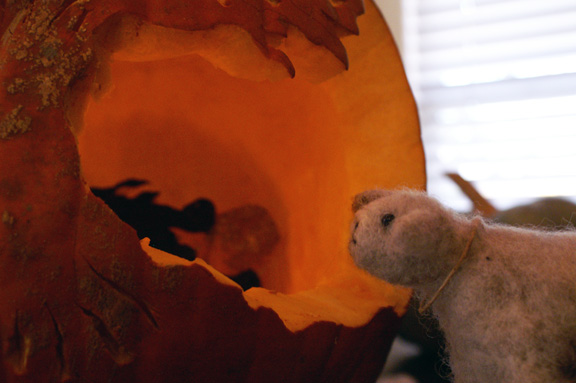 Lottie: I think it’s beautiful. Can you describe it to me, exactly?

Shannon: Don’t play games with me, Lottie; I know that’s the technique mothers use when their children draw them random pictures and they have no idea what it’s supposed to be, but they don’t want to hurt their kid’s feelings.

Shannon: I made you a tree-filled meadow. There’s a little house in the corner to the left, and then there’s a giant oak tree in the center, so you can sit under it and take naps in the shade. I thought you’d enjoy it because I feel like Nova Scotia is filled with meadows, and probably trees too. Maybe they even have pumpkins. You’ll be protected, because pumpkins have hard sides.

Lottie: So…it’s very lovely. You really went to quite a bit of trouble to make this for me. And I truly appreciate it. The thought you put into…

Shannon: Get to the point, Lottie.

Lottie: It’s just that…I mean…when I said “living space,” this isn’t exactly what I had in mind.

Shannon: Well, awesome. Did you even want to just try it out for a little…

Shannon: Yeah. Okay. So what do you say we submit this to Movita’s Pumpkin Carve-Off 2012, since we did spend so much time on it, and we’ll shop around for a more suitable residence for you. Deal? 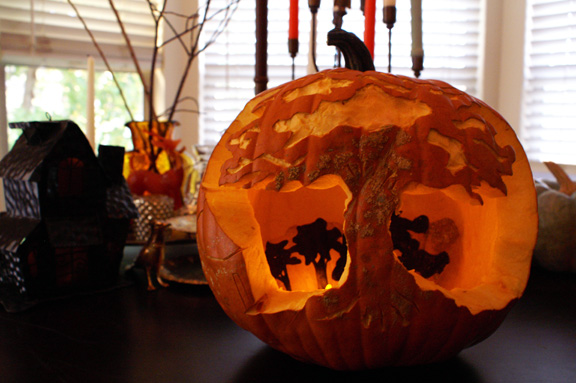 (cue upbeat music once more, as they scour the paper together over coffee and cake for suitable felted animal residences. They make notes, they smile, they are happy.)

Shannon: I found you the perfect home, Lottie. Come look! It’s a mid-century A-frame; do you like it?

(with this post, I officially enter Movita Beaucoup’s Pumpkin Carve-Off 2012. If you love my pumpkin, or Lottie, or both, then go vote! She’ll be having two days of initial judging, followed by votes for the finalist, then a winner will be crowned. I want to be that winner, but I need your vote. For a recap of the dates/rules, visit here.

Shannon: I know it’s a gourd. You’re technically a farm animal, remember? I thought you liked the outside. Nature and such. “Don’t fence me in,” things like that. Pardon me for thinking a meadow would be right up your alley.

Lottie: You know, maybe we just need some time to work on some things. I could go stay with Katherine for awhile; she knows how to treat a sheep…

Shannon: Are you serious right now?!? Katherine runs after sheep at full clip and hugs them while Scott hides behind signs which don’t hide him at all and watches.

Lottie: I guess I see what you’re saying there…

Shannon: I mean, don’t get me wrong; she loves sheep. And she’d love to have you. I’m sure she has a fabulous home for you to live in. But Lottie; she lives in the American South. It’s warmer down there, and you’re woolen. Besides, did you see her video about the autumn cotton harvest? Do you know what could happen to you if you were mistaken for a cotton?!?