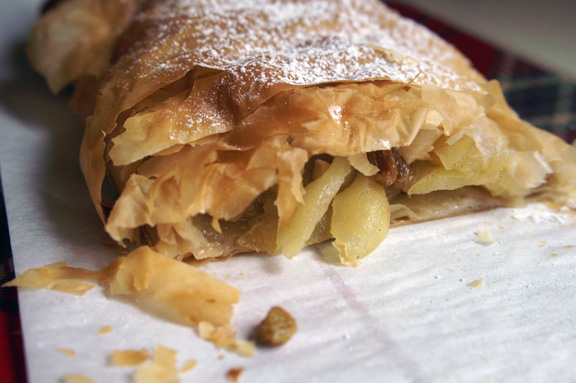 Let me tell you: this strudel was a project. More or less it was a project in my head because I managed to almost psych myself out of it before it began. You see, I have a tiny fear of filo dough. Not really “fear,” but I’m not always the best at doing things the way you’re exactly supposed to do them. When you’re whipping up a batch of sugar cookies, it’s not that big a deal. When you’re messing with temperamental sheets of dough stretched thinner than the outer layer of your skin…different story.

So I prepared because I really, REALLY wanted this to turn out correctly and not be a crazy disaster. Several years ago, I heard what was probably the most sage advice to anyone attempting a new recipe: read the entire recipe first. That is something to live by, people; it makes all the difference because then you know, even if you get lost, what’s supposed to happen next. 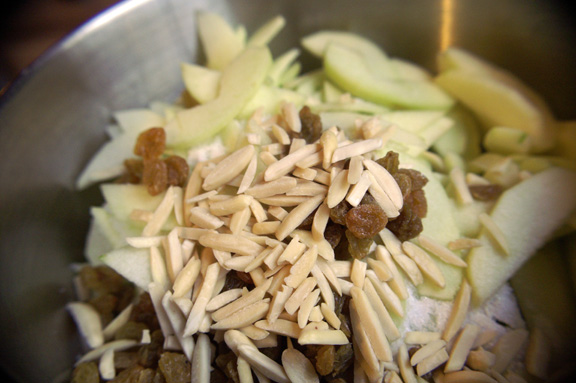 Also, I pre-prepped the night before. This was intended as a breakfast strudel, and haven’t we all been there when your “breakfast” turns into “come on, it’s 11:30 am and we still haven’t eaten!” Since apples really can’t be readied the night before, I measured out what I could measure, zested and juiced the lemon, and clarified the butter. Made post-its so I remembered to stick the filo dough in the fridge before I went to bed (which I managed to do, thank you very much).

I woke up ready to bake; the prep work completely helped. I highly recommend it as you tend to make less weird mistakes when you’re not stressed out. So I got to work peeling and coring the apples, which (because I do not have an apple-corer, as it turns out) took a little bit of time. Thanks to prep-work, all I had to do is throw them in a big bowl with the other ingredients and toss. done! 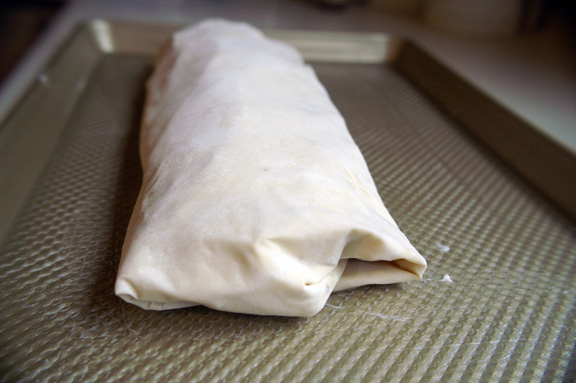 Now it was time to mummify my apple mixture in filo. Deep breath. I removed the filo, and magically, it was perfectly thawed. The butter part was easy (and note: I use a silicone brush and it’s fantastic to work with); even separating the dough sheets went well. After the apple mixture was wrapped up inside, it was time to move my filo mummy to its baking sheet. There was no way this was going to go well using just my hands, so two over-sized pancake spatulas (one slipped in on either side, lengthwise) did the trick.

The oven part was a breeze, and I made sure I really watched it towards the end so it wouldn’t burn. I used my two-spatula technique to transfer it to a serving platter, and poof: schmancy breakfast during actual breakfast hours. Amazing, and a rare occurrence in this house. An added bonus is that this stays warm for awhile, so you can make this for a leisurely brunch and, even if it sits, it’ll taste like it’s right out of the oven.

A side note: sadly, I discovered recently that this strudel recipe is not in the newly revised edition of Essentials of Baking. I’ve had some luck finding both new and used copies of my edition of the book here.

Taken from Williams-Sonoma’s Essentials of Baking: Recipes and Techniques for Successful Home Baking.

Position a rack in the middle of the oven and preheat to 375˚.

To make the filling, toss together the apples, granulated sugar, raisins, almonds, lemon zest and lemon juice in a large bowl until evenly mixed.

Place a sheet of parchement (baking) paper on a large, dry work surface. Unroll the filo sheets, lay them on the parchment, and cover them with a kitchen towel to prevent them from drying out. Seriously, try to work as fast as you can (while at the same time being careful) and this will go well for you. Lay out 1 filo sheet on a separate piece of parchement, brush with a little of the clarified butter, and repeat with the remaining filo sheets, brushing each one with butter. Spoon the apple mixture in a strip along the length of one side, leaving a 2-inch (5-cm) border. Fold in the short sizes and, starting from the border, roll up into a log. Place, seam side down, on the prepared pan.

Bake the strudel until the apples are tender when pierced with a toothpick and the filo is golden brown, 30-35 minutes. Transfer to a wire rack and let the strudel cool slightly in the pan. Using a fine-mesh sieve, dust lightly with confectioners’ sugar. Serve warm (and it will stay warm for a while) cut into thick slices.

Note: if you need to transfer to a plate to serve, use two large spatulas and slide them carefully (carefully!) underneath the strudel. lift to a platter and serve.

slowly melt at least 1 cup unsalted butter in a small frying pan over low heat until it is foamy on the surface.

Pour the melted butter into a small glass bowl or measuring pitcher and let stand for a minute or two. You should see three distinct layers: milk solids on the bottom, clear, yellow liquid in hte middle, and foam on top.

Using a tablespoon, carefully remove the foam from the surface. Pour the clear liquid into a clean container, being careful to leave the milk solids behind in the bowl or pitcher. Discard the milk solids. Cover tightly and store in the refrigerator. Unless, of course, you are using it for this recipe.