I’m still reliving Thanksgiving. I don’t mean to, it’s just that we had so many things to eat I’m finding it impossible to get through them all fast enough. And…since so many things you make on Thanksgiving manage to reappear throughout the winter holidays, I think it’s ok. I’m in the midst of a cookie-baking frenzy right now, so anything “un-cookie” looks appealing to me, even more so than it normally does. Hopefully you feel the same.

These were a new sweet potato experiment I tried over Thanksgiving and they received rave reviews from friends and family alike. I knew I had achieved something when I was told to “leave the marshmallows off that!” this year when taste-tests were handed out. Mind you, it’s not ever my idea to put the marshmallows on sweet potatoes, so I was happy to oblige. 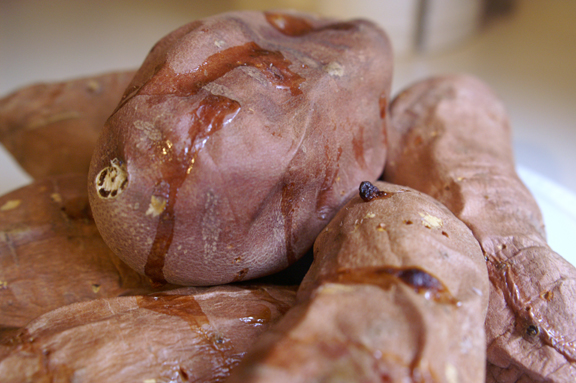 I confess; I did miss the kitsch factor of marshmallow topping. It’s my kind of tacky. But for looks only, not for flavor.

These were actually the end result of a little sweet potato crisis we had the day before Thanksgiving. My market was out of the organic sweet potatoes I normally get, so I instead got the ridiculously inexpensive non-organic version. You know how after roasting a sweet potato, you can open it and eat it, no butter, no nothing, and it’s fantastic and full of flavor? No, sir…not these. after roasting them, they. were. TASTELESS. Revolting. Horrid. Serves me right. Lesson: get the organics. Go to a different market if you have to.

I love the fact that there is no butter in these. Normally I throw a few tablespoons of butter in my sweet potatoes, but not this time, and I didn’t miss it at all. And feel free to play with the ingredients, too, depending on what you like or don’t like. You could easily reduce the heavy cream to 3/4 cup or even 1/2 cup if you really wanted to, or alter any of the other ingredients (except that sweet little vanilla bean.) And as you can see, whipped these up in a food processor, which really contributes to the super-velvety texture.

My recipe, created after a little thought and a visual stroll through my pantry to see what I had to use. Inspired by Mosaic Restaurant’s trio of soup shooters I had years ago, one of which was a vanilla bean/butternut squash soup number I became obsessed with.

Now: before I begin, you can do these one of two ways. for normal days, I would roast the sweet potatoes and add the ingredients as directed and boom: done. For parties or holidays or just if you have the time, you can make these like that and then throw them in a casserole dish and put them in a 375˚F oven for maybe 45 minutes or so.

Preheat oven to 400˚F and position a rack in the middle of your oven. Using a fork, poke each potato about a dozen times all around. When your oven is ready, put the potatoes in. So my oven isn’t covered in burnt sugar, I like to place a piece of foil on the rack UNDER my rack of potatoes to catch the liquid sweetness that tends to ooze during roasting. The better your potato, the more the ooze, so I would suggest it. Roast for 1 hour to 1 hour and 15 minutes (depending on the size of your potatoes.) you’ll know they are done when they are fork-tender all the way into the middle.

Remove from oven and let cool for 10 minutes, or until you can touch them. Peel skins away and discard. Place the potatoes in a food processor and add the vanilla-infused heavy cream, brown sugar, molasses, vanilla and cinnamon. Turn on and let mix until incorporated. Add your salt a bit at a time until you’re happy with it. Since these are naturally sweet, I am generous with the salt, but don’t overdo it. Taste as you go. Once you’ve got it to the taste and texture you want, you’re done! Serve immediately or, if you want to, bake in a casserole for 30-45 minutes.

I’ve learned I write recipes like I leave voicemails; I ramble. I’m sorry.