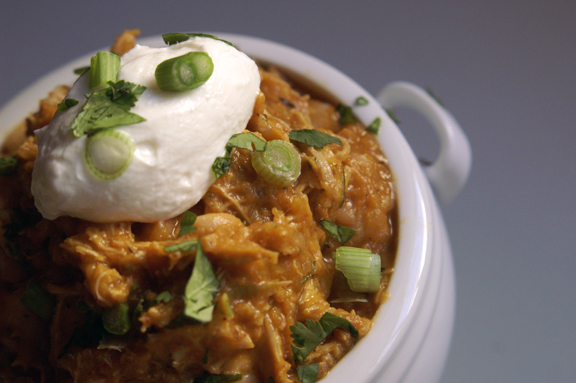 I feel obligated to tell you what I did with our Thanksgiving leftovers. I really wasn’t planning on posting this, but it turned out so well I thought I should. Also, there’s a teensy part of me that knows maybe I owe it to you to post a yummy-but-also-good-for-you recipe after making myself sick eating way too many of the Millionaire’s Shortbread bars. Those were good. TOO good.

This is the first year I managed to use up all the turkey we had left over, and I credit this recipe for it. It’s a great way to use up lots of turkey without having to do the typical turkey soup and all that entails. I much prefer this, and it’s got a bonus of using that extra can of pumpkin puree you probably bought thinking you should make two pumpkin pies.

This recipe works with both your turkey leftovers or ground turkey…you pick. I had made this pre-Thanksgiving because someone in this house is on a diet (it’s not me) and is constantly scouring the internet for interesting homemade food to eat versus always eating the frozen, prepackaged dinners. Although the recipes they’ve found have been hit or miss, this one was a definite keeper. I was amazed by how much flavor and depth it had for being a low-fat, low-calorie recipe. Happiness ensued and this may end up being the chili I make when I’m craving chili this winter. Certainly it beats adding unnecessary calories to an already fattening holiday season, right?

I should say I make no claims on the exact fat grams, calories, or “points” in my adaptation of this recipe. I do believe, however, that my minor alterations are in keeping with this being a healthy one.

Adapted from “Crock Pot Turkey White Bean Pumpkin Chili” on Skinnytaste.com. Although this recipe began as a crock pot one, I am really not a crock pot girl. I don’t know why. So this is made in either a soup pot or dutch oven, whichever you prefer.

First things first: if you’re using your turkey leftovers, you don’t need to do anything but shred it up to use in your chili. If you are using ground turkey, brown your turkey and drain. Set aside.

Add oil to your dutch oven and saute your onions until soft and translucent, about 5 minutes. Add garlic and continue cooking until the garlic releases its flavor, maybe 30 seconds. DO NOT BURN THE GARLIC. Add cumin and chili powder and stir to incorporate.

Add pumpkin puree, oregano, green chiles, and cayenne pepper (if you’re using it) and stir to combine. Add bay leaves, chicken broth and beans and do another little stir until everything looks nice and mixed. Bring to a bubble and then turn down the heat and simmer, covered, for an hour or so, stirring every so often. You can do an initial salt/pepper to taste at this point.

After simmering for an hour, I uncover and let evaporation do its thing. Keep it going at a simmer, stirring occasionally, until it’s the thickness you want. Once you feel like it’s about ready, add your adobo sauce (if you’re wanting that smoky heat) one tablespoon at a time. I use two tablespoons: you can use as much or as little as you want to, but add with caution because the flavor really can overpower a dish.

Once you feel like you’ve reached chili perfection, top with whatever you choose. I use sliced scallions and chopped cilantro, and a little sour cream. Some jack cheese would be lovely on this as well, if you’re the cheese-and-chili type.