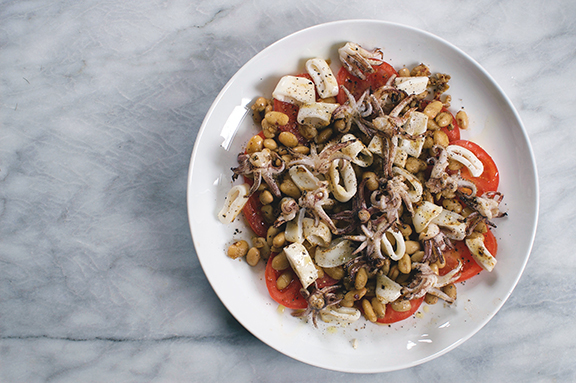 I’m sitting here, and allegedly it’s mid-March, and I’m gazing out over a confectioner’s sugar-dusting of snow on my lawn. I don’t hate it, but it does cause some obvious seasonal confusion. You see, we’ve had temperatures climbing near 75 and sunny in recent weeks; when that happens, your body naturally begins to acclimate itself to warmer days ahead. Weather like this gets things all twisted up.

Daylight savings time nonsense doesn’t help things, either: am I the only one who notices no real change when we “Fall Back,” yet when we “Spring Forward” it just feels like a cruel human experiment in sleep deprivation? If the losing of an hour now makes me feel like I got run over by a truck, why doesn’t the gaining of an hour in the autumn make me feel double refreshed? I made dinner at like 9 pm last night, simply because I had zero idea what real time it was.

It’s no surprise that I made this exceedingly summery dish right now: I have no idea what time or season it is, clearly. And I don’t feel at all bad about this, either, because this calamari / tomato / garlic bean situation is perfect, peak tomato season or no. Often, I wait until things are really in season, but not this time; I saw halfway decent tomatoes and I don’t remember anything after that. What can I say? Sometimes you just want things. 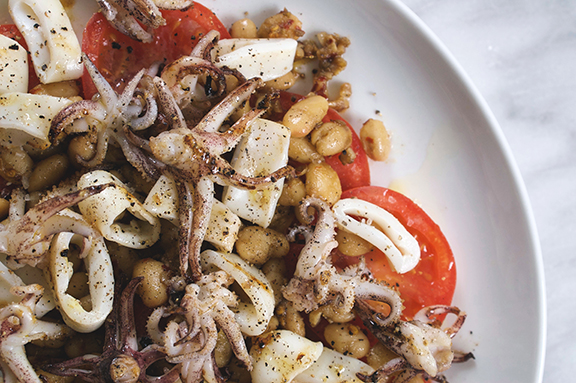 This is another gem from the Alison Roman cookbook I’ve been wandering through recently, and it’s two recipes in one: just make the garlicky beans and eat them, or throw them in this salad-type thing. People forget that charred squid > fried any day of the week, and it’s also way less messy. And the tomatoes? You do nothing  but throw some vinegar on those and they’re ready to go.

I confess: I did some tweaking here, but mostly to the beans. It’s compulsion, really – when you tell me to melt some garlic into a bunch of butter or fat or olive oil, I’m all in, but with one addition: anchovies. I can’t think of anything better than channeling the flavors of a bagna cauda through a dish bursting with tomatoes and squid, so I went ahead and did it here. I think you’ll love the result, especially if you’re as into them as I am. If you’re new to anchovies, I’ll say this: there are two types of anchovy lovers – the ones who actually just eat them or throw them on pizza, and the type that appreciates them inside things like caesar dressing and other sauces. I’m the latter, and I promise you, when you melt them into other things, they transform into silky, salty gorgeousness.

So go ahead: live out of season for a minute until we get an actual onset of permanent warm weather, or save this one for when that day comes. Adapted from Dining In by Alison Roman.

| Notes | Squid isn’t as hard to find as you may think: sometimes you just have to look for it. Finding it at larger grocery stores (especially – and obviously – the ones with a good variety of fresh and frozen seafood offerings) or international markets is a good bet. Tentacle size may vary: if they’re small and you’re using an open grate grill, you may want to run a skewer through them to keep them from falling to their doom.

| Preparation – garlicky white beans | Heat olive oil in a medium skillet over medium heat. Add garlic,anchovies, chile flake and fennel seed and simmer, stirring frequently, 3 to 4 minutes. Add beans and fold into oil mixture; season with salt and pepper to taste. Bring back to sizzling a bit over medium heat, then reduce to low and cook 15 minutes, stirring occasionally. While the beans cook, prep your salad.

| Preparation – squid, tomato + bean salad | Toss squid in a bowl (leave the tubes as one big thing until after you grill) and season with salt and pepper. Heat grill or a grill pan to high, brush with a little oil as necessary, and place squid on grates. Cook, turning the pieces occasionally until it’s lightly charred all over, with nice color, about 5 minutes.

| To Serve | Transfer squid tubes to cutting board and slice into 1/2 inch wide rings. Leave tentacles as/is unless there are larger ones, which you can cut in half. Lay tomatoes on a big platter and pour vinegar over top; season with salt and pepper and arrange beans and squid over tomatoes; drizzle with olive oil and serve warm.