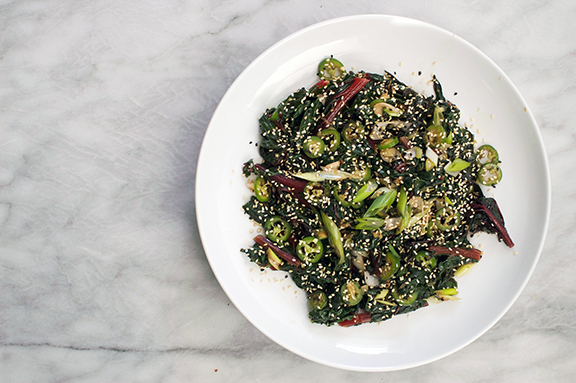 I’ve fallen victim to the flu epidemic. There I was, rolling along through my January, minding my own business, and boom. Saturday morning I woke up wondering why the stairs felt like they were moving under my feet, and an hour later I was half-conscious under 38 blankets shivering my buns off.

The flu is the worst, friends. I wasn’t a sick kid – just the occasional sinus infection and a strep throat here and there, but never this. This is something else, and I wouldn’t wish it on anyone. Five days out, and I’m feeling better, albeit relatively: still some coughing, a stuffy head, and the energy levels of a honey-buttered biscuit. 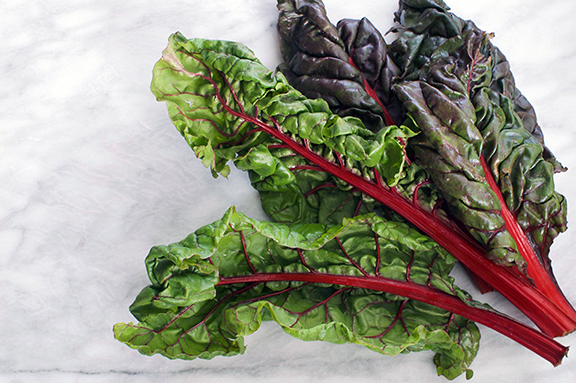 So it’s been a pretty garbage week, and I thought I’d boost my wellness along a little bit with this recipe, another one from Chris Kimball’s Milk Street cookbook. It looked easy (a necessity, right now), and contained all the things I normally employ to make myself better: scallions, ginger, chilies, greens. No garlic, but all the better, because who has the energy to finely mince garlic right now? Not this girl.

This is a beautiful, satisfying dish, although not for the faint of heart, because serrano chiles are no joke, and you’re basically just chopping one up and eating it here, which is borderline thrilling if you’re under the weather. Just chopping scallions and grating ginger will give you a lift, really, and there’s something about sesame oil and soy over greens that’s just healing. It would be a great side, but it makes a fabulous lunch just by itself (especially for someone really not in the mood to eat heavy things yet.) 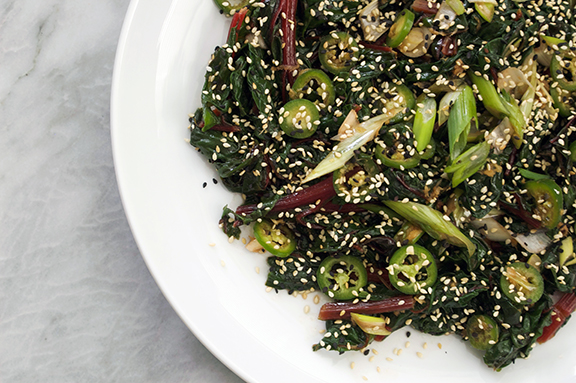 For maybe the first time since the Wee One was a newborn, I have been forced to slow it down around here. Since Saturday, it’s been me and a pile of blankets – one of them heated – in an full-blown effort to get better. The one bright spot in all this was that I gave myself permission to binge-watch during daylight hours – something I never, ever do – just to keep my mind off how gross I was feeling. Turns out, I picked two series that were outstanding.

First, I watched The Marvelous Mrs. Maisel – What a show! It’s like Mad Men, but with the pace you think of when you hear a 40’s-era newsroom typing pool. The cast is phenomenal, with most of them from shows I’ve loved in the past, and if you want something light and funny and bittersweet and sassy and smart, this is a good pick.

Second, I retreated to the comfort of my first love: heavy, sweeping draaahhhhmaahhh, preferably British because let’s face it, they do drama with a grace and sophistication Americans can’t always achieve. Ten minutes into The Last Post, and I was fully in love; if you like a good mid-century period drama, stop what you’re doing and watch it. It’s 6 episodes set in the mid-sixties during the Aden Emergency, a.k.a the last gasps of British rule over what is now Yemen. The cinematography is almost unbearably beautiful, and what everyone goes through individually and together during the course of these 6 episodes will rip your heart apart, sew it back together, and set it lovingly, still battered, back in your chest. 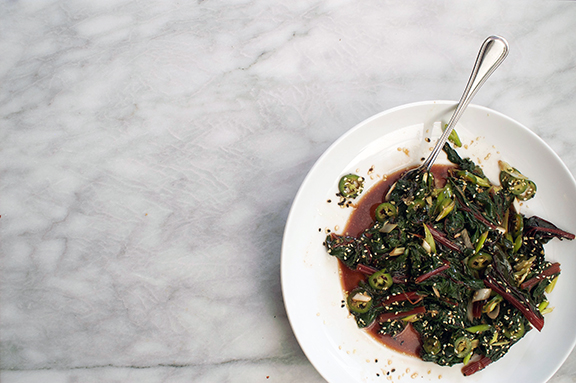 Taken straight outta Kimball –  The Milk Street Cookbook: The New Home Cooking by Christopher Kimball, that is. It’s a fabulous book, as I’m quickly learning, but I had no doubt.

In a large skillet over high heat, bring water and salt to a boil, swishing to dissolve the salt. Add chard to the pan and cover (the lid may not fit tight, and that’s okay: it can sit on top of the chard.) Cook until chard is wilted, stirring halfway through, 5 minutes. Remove the lid and cook a minute until liquid has evaporated; transfer chard to a serving platter and wipe out skillet.

Sprinkle ginger, scallions and chile slices over the chard.

I know that’s weird, especially the ginger, because you’re probably like, raw ginger over my chard? Because I was, but trust me, it works.

Add both oils  to the skillet and return to medium-high heat until very hot, 2 to 21/2 minutes.

I know, right? I’ve always been told that heating sesame oil positively destroys the feelings of sesame oil, but again, I swear: it works. Maybe the grapeseed oil protects it, not sure. Keep going.

Pour hot oils directly over the greens – you’ll here them sizzle, it’s great – and toss to distribute. Drizzle vinegar and soy over top and toss again; sprinkle with sesame and serve it up. Or just eat that pile of goodness with a fork, as I did. So ladylike, this one.