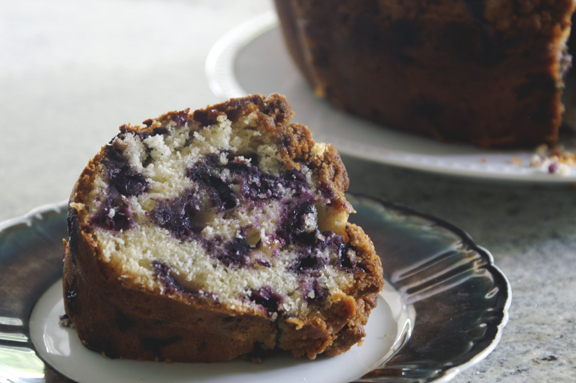 August is not a month for baked goods, it seems: at least not in the Baked Occasions book. For the first time since Natalie and I began this project, I was underwhelmed by my choices. There was a birthday cake offering which I had basically done in its Sunday Night Cake form (indeed, it’s the same yellow cake, scaled down and paired with a slightly different chocolate frosting), a salted caramel souffle which seemed much more at home in autumn, brioche ice cream sandwiches (homemade brioche in the middle of summer? nope!) and chocolate chip hush puppies. I don’t know about you, but frying things in August seemed like a bad idea, plus I have a difficult time wrapping my head around what exactly this would taste like.

It left me with one clear winner: Nonnie’s blueberry buckle. Blueberries are in full swing here in the midwest – dirt cheap and tumbling off shelves in any store you walk into. Its seemed practical, because this isn’t a dessert cake: this is a breakfast cake, pure and simple as a classic crumb cake, but with a large amount of suspended fruit inside. it’s simple to make (for once, not a 4-bowl production) and you can even make it in the wrong pan, as Natalie and I both found out. 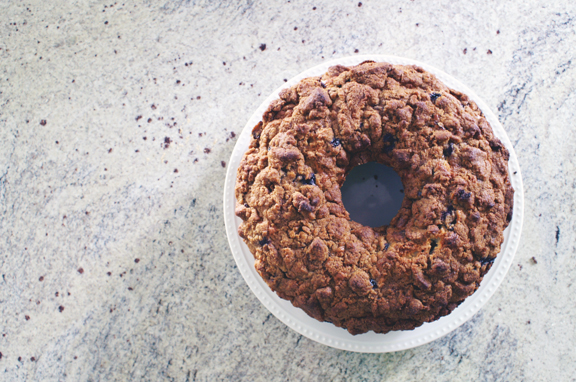 The Baked boys really want you to make this in a tube pan with a removable bottom. Logistically, this is the best way to go: you have a ring cake with a crumb topping, and normally, flipping something like this out of a pan and then flipping it right back over could be disastrous.

Enter the tube pan, which everyone should own, right? Because angel food and chiffon cakes don’t settle for anything less. And yet, Natalie and I found ourselves without proper equipment, even as 5-year+ veteran bloggers. Reasons:

Natalie had made her cake ahead of schedule, which alleviated my anxiety with using a Bundt pan as a substitute here. I hadn’t thought to ask her about the outcome, but we talk all the time and no meltdowns had hit my inbox, so I felt confident going in. 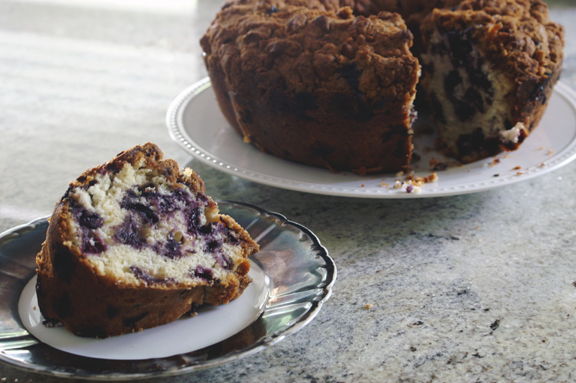 Turns out, you don’t need a tube pan for this, although it would be easier, and I personally love the regal, straight-backed nature of a tube-pan cake. Using a bundt pan is perfectly acceptable, provided you take your time to let things cool completely, and you do your best job to separate the cake from the pan with a knife before you begin the removal process. This is a credit to the texture: even with massive amount of blueberry action inside, the cake bakes up sturdy on the outside with a lovely crumb-cakey inside, which holds firm as you unearth it. The crumb is incredibly moist going on – so moist I thought I had done something wrong – but makes it seal tight to the cake while baking, so nothing falls off when you remove it or when you slice it.

Do I even need to talk about the blueberries? there’s a whopping 4 cups in here, which ensures every bite is filled with them. The whole thing screams giant blueberry strusel muffin, not overly sweet, and great with coffee or tea. It also works well as a snacking cake for later in the day, because you don’t feel as bad lopping off a hunk of this as you would say, a chocolate dessert cake. 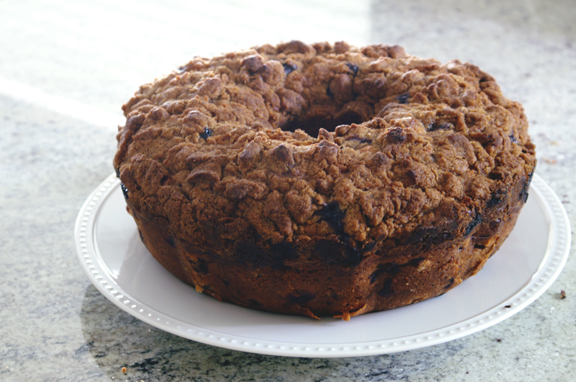 Pros: It’s a crumb cake, it has a prolific amount of blueberries, and I can eat it all the time without feeling like I’m violating any social acceptability rules. Easy to make with ingredients you have already. A great way to use up your glut of summer blueberries, and you could use other berries as well to make it a multi-berry cake: raspberries or blackberries would work well here also.

Cons: It could get dry fast in your oven, and all those blueberries make cake-testing slightly more difficult than usual: watch it closely. This is minor, but although there’s ginger and lemon in the recipe, I didn’t feel like I tasted either one, which was actually fine by me. If those were the only ingredients you didn’t have in your pantry, make it anyway and just leave them out. If I were to make it again, I may go heavier with the sour cream/heavy cream, just to see.

Overall, it’s fabulous, and perfect to make right now if you’re like me and you have both the need for breakfast cake and also the need to use up all those berries you’re eagerly digging out of right now. They’ll be gone before you know it, friends, so don’t let them go to waste. You know how we get when it’s January and we start missing the berries. Natalie was super-stoked I chose this one too, because she’s a big blueberry fan as well: head over here to see her beautiful beast of a cake and hear what she thought of it.

For the Blueberry Cake:

For the Cinnamon Topping:

In a large bowl, whisk together both flours, the baking powder, salt, ginger, and baking soda. Set aside.

In the bowl of a standing mixer fitted with the paddle attachment, beat the sugar, oil, and butter on medium speed until light and fluffy, 4 minutes. Add the egg and egg yolk and beat until incorporated. Scrape down the sides and bottom of the bowl, add the vanilla and lemon zest, and beat again for 10 seconds.

Measure out the cream into a glass measuring cup. Add the sour cream and whisk until combined. Add the flour mixture to the sugar mixture in the standing mixer in three parts, alternating with the cream mixture, beginning and ending with the flour mixture; beat at medium speed after each addition until incorporated, 10 to 15 seconds. Remove bowl from stand and use a spatula to fold in any dry patches in batter, scraping up from the bottom where dry spots love to hide.

Using a spatula, fold the blueberries into the batter; it will be very thick, so take your time and really get them distributed. Transfer the batter to the prepared pan, gently smooth the top with an offset spatula and prepare the topping.

In a large bowl, whisk together the brown sugar, both flours, and cinnamon (do not worry if large pieces of the sugar remain). Drizzle the butter over the mixture and use your very clean hands to pick up the mixture, squeeze it in your fist, and let the mixture fall back into the bowl, repeating until the topping comes together.

Bake the cake until a toothpick inserted in the center of the cake comes out with a few moist crumbs, 50 to 60 minutes. Set the pan on a wire rack to cool for at least 20 minutes. Loosen the cake from the sides of the pan with a paring knife, then push the bottom of the pan up to release the cake. Use the knife to loosen and remove the cake from the bottom of the pan, then cool completely, topping side up, on a cooling rack. If you used a bundt pan, loosen the sides (including the inner ring sides) from the pan with a paring knife, then secure a large plate to the top of the cake using your hands to grip the sides. Still gripping both sides firmly, flip the pan over onto the plate, set on the counter, and slowly pull up the pan to release it from the cake; flip it back over, topping side up, onto your cooling rack to cool completely before slicing.