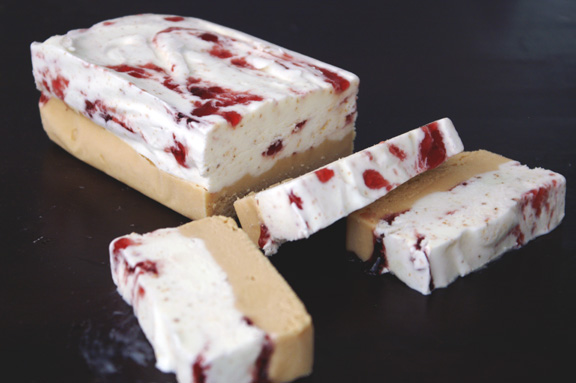 Because I’ve been known to make questionable (but exhilarating!) life decisions when I get stressed. Like, for example, turning to childhood foods for sustenance, then taking those foods and turning them into ice cream desserts.

So this happened. If I think about it, it’s probably a combination of not having time to sit down during lunchtimes recently, and also packing lunch in a carousel horse-themed lunchbox for my child everyday. Whatever it is, it’s made my own childhood lunches come to mind, including my favorite sandwich, the Peanut Butter + Jelly. 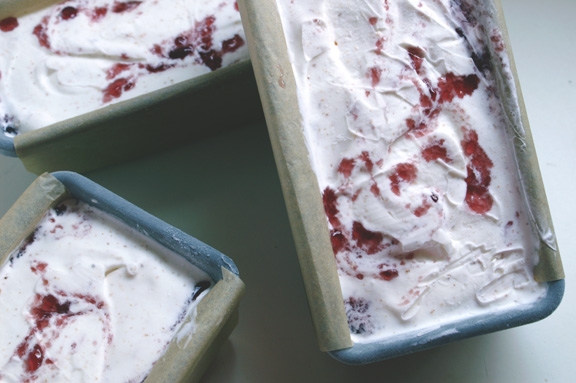 I don’t know what you grew up with, but this is how we made lunch back in the day. I still maintain a particular peanut-butter-to-jelly to bread ratio vastly different to Mr. Table’s ratios – he uses far too much peanut butter, and both his ingredients overtake the bread like a fast-motion lethal virus attacking a host) and the Wee’s – she’s Team Peanut Butter, solo.

I enjoy a modest spread of both: peanut butter barely coating bread in a thin layer, enough jelly to really taste it, but stopping short of messy. Bread can be classic white or wheat, but my favorite is a rye or pumpernickel – in life, really, but also with sandwiches.

So it’s October, and I’m taking a breath between feature work. Doing the Spinalong with Natalie is palate-cleansing, for me: a way to think about food totally on my own, with her, but without restriction, and using someone else’s recipes versus having to create my own. You’d think all the recipe development and execution would make me weary of the kitchen, but it doesn’t: rather, I crave making other people’s recipes, because no thinking required.

Thanks to Jeni’s two cookbooks, I can give you this terrine: my take on what October feels like to me. It’s not quite cold yet everywhere; even here it waffles (mmm, waffles!) between near 90-degree temps and the rather chilly 40 degrees I woke up to this morning, which means it’s transitional weather perfect for PB + J’s. 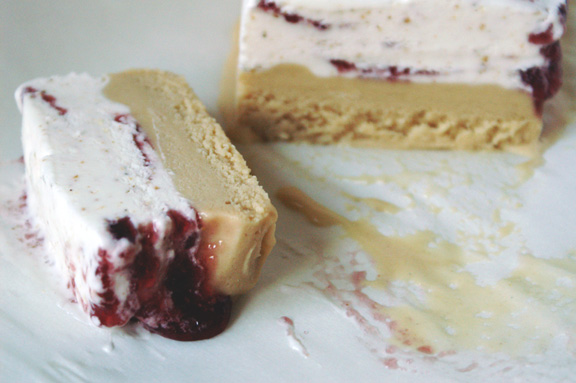 What’s going on here? Okay: so first you have a creamy peanut butter ice cream, made with a decidedly childlike peanut butter – Skippy Natural – which comes out tasting like every soft peanut butter candy you can think of. An unexpected outcome, to be sure, but a welcome one: the flavor closely resembles what you would taste if you ate 6 to 7 Reese’s Pieces and then did a shot of 2% milk to wash them down. The second thing happening is a sweet cream layer – not vanilla, just milky and soft, swirled with grape jelly and freckled with toast crumbs. As in, toast some of your favorite bread until it’s deeply toasty and then scrape it off into a bowl with a butter knife, then swirl that toasty flavor into your ice cream. Because toast.

I layered the whole dang thing into loaf pans this time, because we are talking about a sandwich after all, which would mean a “loaf” of some sort should be involved. So there you have it: a “loaf” of peanut butter and jelly ice cream with toast crumbs aka my October ice cream feels. 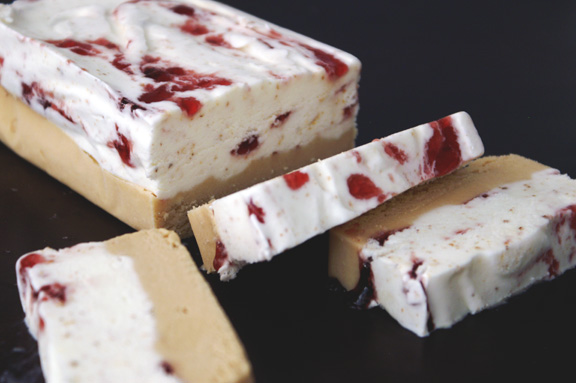 Natalie did something equally entertaining, I think, and if you want to get technical, more suited to October than my own offering. She made Jeni’s Salty Vanilla Frozen Custard base and paired it with a perennial October favorite: Halloween candy. Her choice is classic Natalie: I feel as though I can say that with confidence. Have you noticed how incredibly “midwestern childhood” we get when fall hits? We do this every year, and it makes me happy in my heart. I’ll let her tell you about it over here.

Consider yourself October’d: I have a catch-up post waiting in the wings to publish after this, and I’m hoping the mass hysteria of a whole two posts in one month kickstarts some action over here. Until then, make yourself some PB+J terrines, and some Salty Vanilla Custard with Halloween Candy, kick back, and let the October wash over you.

for the peanut butter ice cream base:

for the sweet cream “milk” ice cream base:

for assembling the terrines / mix-ins:

Fill a large bowl with ice water, set aside. Mix 2 tablespoons of the milk with the cornstarch in a small bowl and set aside. Add the cream cheese, peanut butter, and salt to a medium bowl; set aside.

Combine remaining milk, cream, sugar, corn syrup, and honey in a large sauce pan and bring to a rolling boil of medium-high heat; stir occasionally (which may be a tic of mine, but I just never want anything to burn.) Boil for 4 minutes, stirring frequently. Remove from heat, re-whisk your cornstarch slurry (it settles when it sits) and stream into the hot milk mixture, whisking constantly as you do.  Place pan back on burner and bring the mixture back to a boil and cook, stirring with a spatula until slightly thickened – 1 to 2 minutes.

Remove pan from heat and pour about a 1/2 cup into the cream cheese-peanut butter mixture; whisk until smooth and no cream cheese lumps remain, adding a little more of the hot milk mixture as needed. Pour the remaining hot milk mixture into the peanut butter-cream cheese mixture and whisk until smooth and homogenous. Set the bowl inside the larger water bath  bowl and whisk every so often to allow mixture to cool, about 45 minutes. Place in refrigerator to completely chill, at least 4 hours or overnight, which is how I typically roll with ice cream bases.

Pour ice cream base into the frozen canister of your ice cream maker and spin according to manufacturer’s instructions.

Line loaf pans with parchment paper, overhanging the long sides only (which means, obviously, that the short sides will be bare). When ice cream is ready, divide ice cream carefully into pans, aiming towards the center and then spreading out to the edges with a spoon. Once everything is even and smoothed, transfer to freezer and cover to freeze.

Same as above, basically: in a large bowl (remember, this is the bowl your entire mixture will ultimately end up in), whisk together the cream cheese and salt.

Pour a small amount of the hot milk mixture into the cream cheese mixture; whisk to combine until mixture is smooth and homogenous. Add remaining milk mixture and continue to whisk until everything is homogenous. Set the bowl inside the larger water bath  bowl and whisk every so often to allow mixture to cool, about 45 minutes. Place in refrigerator to completely chill, at least 4 hours or overnight.

Pour ice cream base into the frozen canister of your ice cream maker and spin according to manufacturer’s instructions. Meanwhile, pour grape or strawberry jam into a small microwave-safe bowl and heat for a few seconds at a time on high, until just beginning to melt. whisk to break up until jam is as smooth as it can be, but not hot (because it’s going into ice cream, silly.)

Once ice cream is ready, remove canister from the ice cream maker and stir in toast crumbs using a spatula until evenly distributed. Remove the loaf pans from the freezer and add a few small spoonfuls of jam to the frozen peanut butter ice cream. Add a few big spoonfuls of the “milk” ice cream over top, spread a little with the back of a spoon, then add more small spoonfuls of jam; you’re going for a swirl, so spoon jam accordingly, ending with a few drops of jam at the end. Use a butter knife to swirl the mixture ever so slightly, then cover and place back into the freezer to set up, at least 4 hours or, as usual, overnight.

And now, you slice and eat. Use a thin knife to loosen up the naked short sides, then lift the ice cream loaves out using the parchment handles. Set on your work surface, slice up, and serve.