Oh hey! Is this my blog? RIGHT!

Normally this is the part where people say they’re back and that they’re sorry they sort of disappeared, but I feel like maybe I’ll skip that: I’m not back. Well, not really; almost, though. It’s been a summer of changes and opportunities and all sorts of things, and I can’t wait to tell you about it.

And yet I must wait, because I’m still in the middle of things. Literally, it seems: i had to clean off a heavy coating of sugar and flour and a few errant pears from my hands just to type this, but more about that later. Here’s a status update on things as they stand today:

Blog, (aka the work that pays me in joy and friendships): Inadvertently dormant; I miss it. I’ve been neglectful and it’s all the excitement’s fault. I promise I’ll update you on all the happenings, and soon.

Work (that pays me in dollars and joy): So, so much going on on this front, people, that I can’t even begin to tell you. But I will tell you, and soon. It’s like a new challenge awaits me every single day.

Current Mood Status: Frustration tears. I’m working on a feature, and it is kicking me squarely in the buns right now, friends. I stupidly thought this would be the easiest one I’d worked on, and I couldn’t have been more wrong. It’s grueling, and I have never had more recipes fail in maybe my entire career of cooking. I know i’m going to be super proud of this one once it’s in the bag, but for now? Me and the recipes for this feature are at war; a war I am not winning today.

But that doesn’t stop me from loving what I do: it’s just taking more time than I anticipated, which is fine because I know i’ll figure it out, and I’ll learn from it, blah blah blah *sigh*. I know I’m going to vastly improve my baking recipe creation skills with this one, but it’s hard to see that forest through my aggravation trees, if you know what I mean. 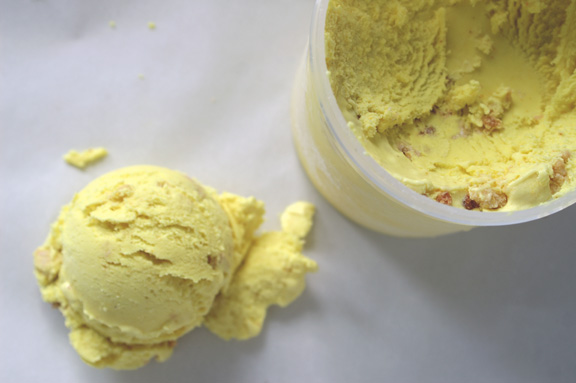 Once I get my groove back, we’ll do the Just One Question project, but for now, let’s ice cream: it’s time for the Jeni’s Spinalong (because I’m never skipping my Jeni’s ice cream posts, sorry, no.) I’m happy to say that this month actually kicks off a whole season of Spinalong posts: I know, right? Natalie and I love fall and winter with such intensity that we’re doing monthly Spinalong posts for October, November and December as opposed to our usual quarterly post.

And PSSST: I just read this from the Jeni’s blog, and it’s really inspiring / honest / informative / laying-it-all-on-the-table frank and if ever run a business, I hope I run it the way that Jeni Britton Bauer runs hers. I aspire to her amazingness and am continually impressed with her grace and raw intelligence.

Overriding Theme: Our Feels. Have you ever just felt a particular feel based on a certain time of year? We have, and we’re going to try to convey those feels via ice cream, just for you.

Take this month’s offering, for example: way different feelings about September, even though we tend to think very much the same in life. Natalie went with the sweet cream ice cream base, with which she made S’mores Ice Cream with Toasted Marshmallow and Fudge Ripple (ripple!), and it looks ridiiiiiiiiiculously good. I know for a fact that if we lived in the same city, I’d be over there right now eating it because it’s hotter than it should be here, and I could use a frozen s’more in my face. Her ice cream is like the kid who goes to camp and is good at everything there: archery, swimming, crafts, plus they’re the star in the big farewell night skit. Her ice cream is sporty, well-adjusted, pleasantly tanned and glowy.

Alternatively, mine is nerdy, if ice cream can be nerdy (and indeed, it can be.) Mine is the kid who spent most of the summer nose-deep in books, brows permanently furrowed, because he hates outdoors and mosquitos and heat and is easily burned. Mine is the kid who – when asked what they did this summer – expounds on how he studied Native American maize cultivars. My ice cream is made by an adult (me) who stared down the Jeni’s book, with all it’s luxurious, desserty flavors, and settled on a tangy honey-buttermilk base, but then wanted to make it very “indian summer” by steeping sage in the buttermilk and dry-toasting whole cumin seed and infusing honey with it. 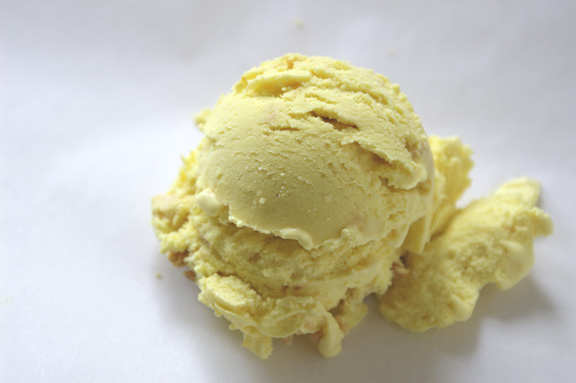 I’ll say this in my defense: it’s really good. Definitely not for those of you who just like a sweet, straightforward ice cream, but for the adventurous among you, this one is a winner. It’s got just the right balance of buttermilk tang and honey sweet, and the sage and cumin work so nicely together. to give it sort of a corn feeling (because corn is so late summer to me, and has been forever), I’ve added a type of cornbread gravel. Not Jeni’s, exactly, because frankly, I had trouble with it, and I think it’s my fault, but still. I based it roughly on the Momofuku pie crust crumb recipe, but with several adjustments along the way to make it more like how I envisioned the Jeni’s gravel to be. It’s not overpowering, but the corny crunch in pockets makes the whole thing really lovely. I get that it’s not up everyone’s alley, but it’s where my head’s been lately, and my heart.

So: I’m headed back to my own obsessive recipe development and writing hustle now, in the hopes that we get to talk again really soon and I can tell you all the things going on. I owe you info on:

…and much, much more. See you soon. I’m going to have a biiiiiig catch-up sesh when I finally get back to this blogging thing. Miss you guys. Let’s talk about life and television and movies and cooking and writing and all the stuff we normally chat about, really soon.

Gravel inspired by Jeni’s cornbread gravel but loosely adapted from the Momofuku Milk Bar recipe for pie crust crumb. Ice cream recipe barely adapted from Jeni’s Splendid Ice Cream Desserts. Thanks to Jeni’s for always being such a total inspiration; they know I love them.

Preheat oven to 350˚F and line a baking sheet with parchment paper. Whisk flour, cornmeal, buttermilk powder, sugar, and salt together in a medium bowl. Add butter and water and stir with a spatula until combined and the mixture is evenly damp. Use your hands to squeeze the mixture into clumps and spread out evenly over prepared baking sheet, leaving space between crumbs. Bake for 18 to 20 minutes, flipping once halfway through bake time; crumbs are done when golden brown throughout. Remove and set on wire rack to cool.

Add cumin seed to a small, cold skillet; turn heat to medium and heat, tossing or stirring frequently, until seeds are toasted and fragrant. As you toast the cumin seed, heat the honey and water in a small saucepan over low heat, just to warm it. Once cumin is toasted, add directly to honey and stir to incorporate, increase heat to medium, and bring just to a bubble. Reduce heat and simmer for about 5 minutes; remove from heat. Push through fine mesh strainer to remove seeds and allow to cool to room temperature.

Stir 2 Tbsp of the buttermilk together with the cornstarch in a small bowl until cornstarch dissolves; set aside.

In a large, heatproof bowl, add cream cheese, salt and turmeric. I like to mash it together and break it up a bit. Set aside.

In a large, heavy-bottomed saucepan, whisk together remaining buttermilk, heavy cream, sage leaves and toasted cumin honey over medium heat. Bring to a boil, stirring frequently; remove from heat. As you whisk, add cornstarch mixture (stir it a little first as it tends to separate and clump up) and place back over heat until mixture comes to a boil; continue stirring until mixture has thickened, 3 minutes or so. Remove sage leaves and discard.

Remove from heat and pour about a 1 cup of the hot buttermilk mixture into the cream cheese mixture: whisk rapidly until mixture is smooth. Add the rest of the buttermilk mixture and continue to whisk until everything is homogenous and mixture is completely smooth; place bowl in ice bath and allow to cool, whisking occasionally, to room temperature on the counter. Cover and place in refrigerator until completely chilled, at least 4 hours or overnight (I prefer overnight).

Remove prepared (and thoroughly chilled) ice cream base from the refrigerator and spin in your ice cream maker according to manufacturer’s instructions. Remove from canister and layer in cornbread gravel (spoon in a portion of ice cream, sprinkle in some gravel, repeat) and freeze until firm, at least 4 to 5 hours. Scoop and enjoy.