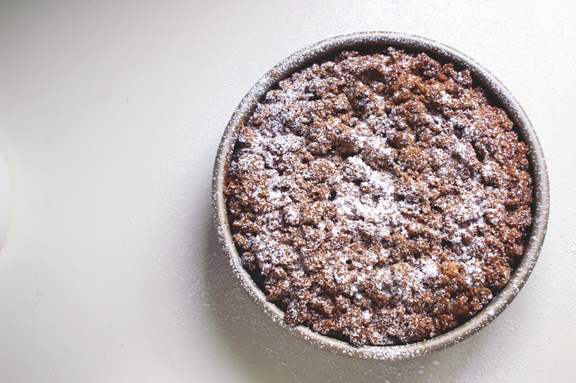 When I was little, I had no idea where our coffee cake came from, beyond the obvious fact that it came from my mom’s oven. Once it was out of the oven, it went directly into our mouths, and that was that. As I got older, I realized this was the same cake my grandma and her sisters made, making it probably the first “passed down from generation to generation” recipe I knew about.

My family on my mom’s side hails from New York. Queens, to be precise. I had no idea how much this would affect my breakfasts at the time, but now I totally get it. Because that crumb cake I grew up with is considered the classic New York Style crumb cake. 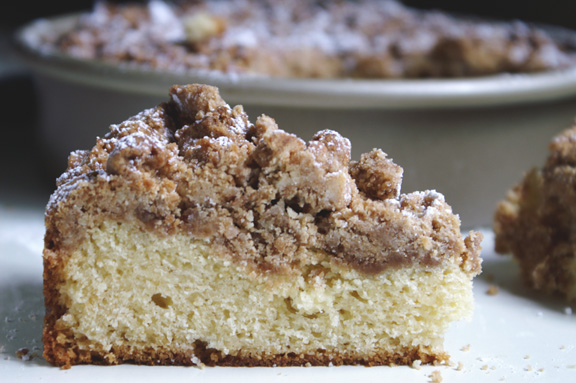 It was only recently that I found out just how much our family crumb cake aligned with what New Yorkers think of when they think of crumb cake. Enter the Baked Explorations cookbook: in it, you’ll find a recipe for one. If you pare down the measurements from a 9 x 13 size to an 8 x 8 size cake, our recipes are almost identical, right down to the almost-ridiculous amount of crumb topping. Color me delighted. 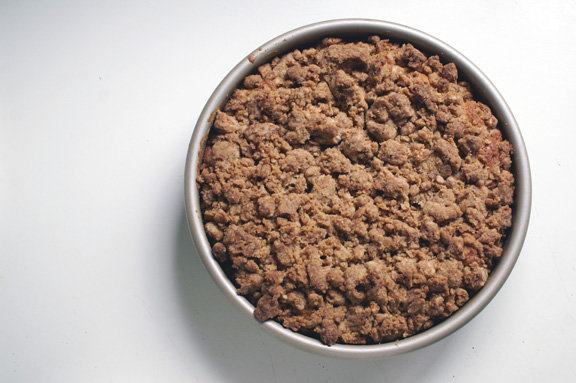 Technically, I shouldn’t know this information. My mom has kept this recipe from us for decades, always insisting she make it, perpetually resistant to hand it down, lest she find out that this cake is the only thing we need her around for (false.) If that were true, we would have discarded my mom about 7 years ago when she accidentally left a printout of the crumb cake recipe – emailed by my grandma – on the computer. My sister noticed her slip-up, and after some sisterly hand signals and eyebrow-waggling, discreetly printed off said email and we’ve had it ever since. 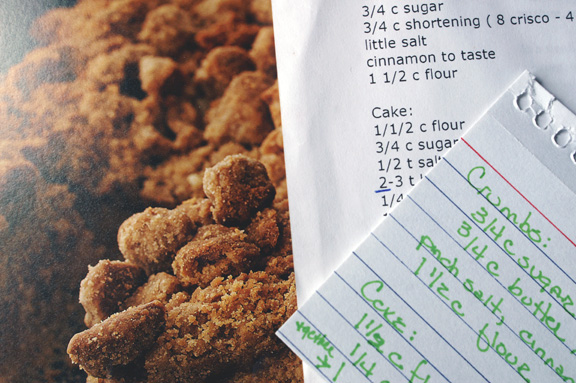 So Mom: if we really only kept you around because of your crumb cake prowess, you’d be gone by now. We love you. We’ve had this recipe for years now. I’ve worked on fine-tuning it over time, and I feel like the recipe I’m giving you is sort of a carefully-preserved-yet-updated version of our family cake. I can’t give you the original, because I see my mom in a few weeks and she’ll have access to several sharp objects and also a pool, and you never know what could happen.

So here: behold my lovingly-restored version of my family’s classic New York crumb cake. If you ask us, we’d tell you we only make this cake around holidays and during summer vacation when we’re all together, but that would be intentionally misleading. Because by “holidays” we mean when two or more of us are in the same house together, or whenever any holiday, no matter how obscure, happens.

And sometimes we just make it on a Thursday and eat it. Because it’s that kind of cake. 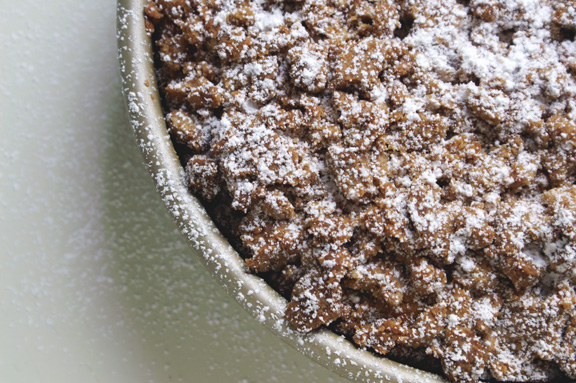 My Family’s Classic New York Crumb Cake (but not exactly, so as not to give away any family secrets)

Serves | varies |  (not gonna lie, sometimes I pop it in the freezer and chunk away at it myself, so…serves as many or as few as you want/need it to, depending on your hiding skills)

*I use Vietnamese cinnamon in basically everything: if you know me, you know this by now. If you’re using cinnamon, first check the label if you’re not sure what type it is: the stuff you find in grocery stores doesn’t always make a huge differentiation on the label. If you’re using the more mild Ceylon cinnamon variety, up your cinnamon to 3 teaspoons.

In a medium bowl, whisk together flour, both sugars, salt, and cinnamon until evenly distributed. Add melted butter and use a rubber spatula to mix until combined. Set aside.

Preheat oven to 375˚F. Grease bottom and sides of an 8-inch cake pan.

In a medium bowl, whisk together flour, baking powder, and salt; set aside.

In the bowl of a stand mixer, beat butter and sugar together until fluffy, 5 minutes. Scrape down sides of bowl with rubber spatula, add egg and vanilla, and beat until incorporated, 1 minute; scrape down sides again.

In a small bowl, whisk together milk and sour cream until smooth. With mixer on low, add flour mixture in two parts, alternating with milk mixture, stirring until just combined. Remove from stand and use a spatula to incorporate any dry patches in the mixture, paying special attention to the bottom of the bowl (where things tend to hide). Pour into prepared pan.

Using your hands, work the crumb mixture into large crumbs by squeezing handfuls of the mixture together and then gently crumbling them back into the bowl. When you have a good mix of large, medium, and small crumbs, use your hands to pile them evenly over the top of the batter. Bake on medium rack of oven for 30 to 35 minutes, testing with a toothpick for doneness; no one likes a dry crumb cake, so your cake is done when the a few moist crumbs cling to the toothpick. Remove and transfer to wire rack to cool completely.

Dust with confectioners’ sugar if you so desire (it really is wonderful both ways) and serve immediately.

This cake stores remarkably well in the freezer, so eat it with in 3 days of making it, but then go ahead and store it away if there’s any left.

the just one question project: question 8.