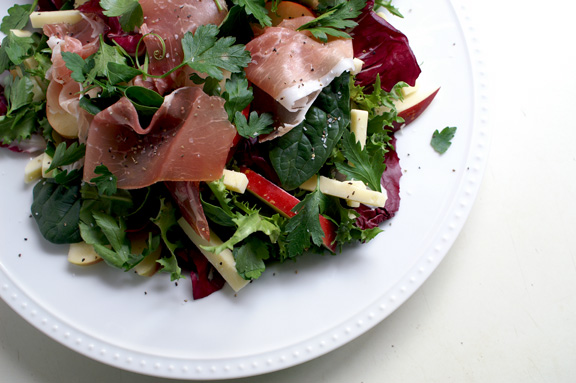 Where. Have. I been?

Well, friends, I’ll tell you; I didn’t drop off the face of the planet, however; I did leave my home state for a 2-week stint in central Florida to assist in a dual move, which felt sort of like leaving the planet. My sweet grandparents moved into a sassy independent living community (because they’re still mega-sassy) while my mother silmuntaenously moved into her new house.

I saw the beach twice.

I did quite a bit of sweating not on the beach.

It wasn’t terrible, but it was a gargantuan amount of work loading and unloading an incalculable amount of boxes. Here’s the thing: my people are a people prone to really caring for their things. It’s not materialism: we are curators – archivists of special things given us – and we almost never destroy, break, or mishandle items dear to our collective hearts. This is an admirable quality until you do the math on 90 years of caregiving. Math:

the owners of the much stuff, a.k.a my grandparents. I stole this photo because it’s one of my favorites.

And such fabulous stuff, really. As I said earlier, I wouldn’t say any of us are materialistic: often it’s quite the opposite. But we love old things…like old people. And, quite obviously, their things.

Which, during a move, can prove difficult. Especially for the movers, who look at you like you are out of your mind when you ask them to please carefully move the 3 1930’s-era buffets, the mid-century china cabinet, and an ancient desk which looks like maybe you stole it from the Oval Office. Add to that maybe 89 boxes of immaculately preserved 1970’s era toys and a Victrola, and you’ve got yourself a party.

Did I mention that we like to craft? Because all of that came too. Plus stacks of Tupperware…from the Kennedy era. Also I don’t know how many photos, dating back to probably when photos were first invented.

Because we like to care for the past, and all of it is very organized, but unearthing all of it to move from one house to another, and then finding places for it? Similar to one of those square puzzles where the one piece is missing and you have to move things around to unscramble the picture, and that can be infuriating and frustrating and totally awesome all at the same time. Had I wanted to work, I wouldn’t have been able to, because the internet / tv / phone bundle thing didn’t get switched over for most of the trip. It was like camp, really: camp with lots of vintage glassware.

I made you this salad before I left and had zero time to write about it. It doesn’t deserve that sort of neglect, because it was fantastic. From the Andrew Carmellini cookbook American Flavor, which I continually swear none of you should be living without, it’s probably more of an autumnal salad if you want to get technical about it (which I do not.) The winter was over, the weather was getting warmer, and we were starting to fire up the grill here: the flavors felt right to me, and I think you could honestly make this any time of year and get away with it. Who’s going to turn down wheat beer vinaigrette drizzled over things like aged cheddar, proscuitto and bitter greens? No one. 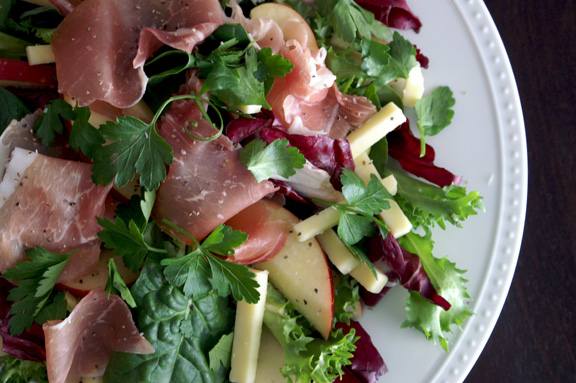 I’ll resume my regularly scheduled program after I unpack my suitcase, which is filled with stolen Tupperware, an old Japanese 35mm camera, a deluxe Auto-Bridge game, and the entire Little House on the Prairie series of books from my childhood (thanks Mom!). I missed cooking too, and I’m really ready to get back into the swing of things.

Adapted barely at all from American Flavor by Andrew Carmellini. After 3 years of owning it, it’s still in my Top 5, with good reason.

for the wheat beer vinaigrette:

Whisk together beer, honey, mustard, and orange juice into a medium bowl. Continue to whisk as you stream in oil slowly, then add salt and pepper to season. Set aside for an hour to let flavors blend.

Toss together the bitter greens and fresh spinach; drizzle dressing over leaves and continue to toss until coated, and season with salt and pepper. Divide onto 4 plates. Top with cheddar matchsticks, apple slices, proscuitto ribbons, and walnuts; scatter parsley leaves over each salad and season again with salt and pepper. serve immediately alongside more of the beer vinaigrette.

sassy asian chicken sesame salad (for when you can’t adult.)