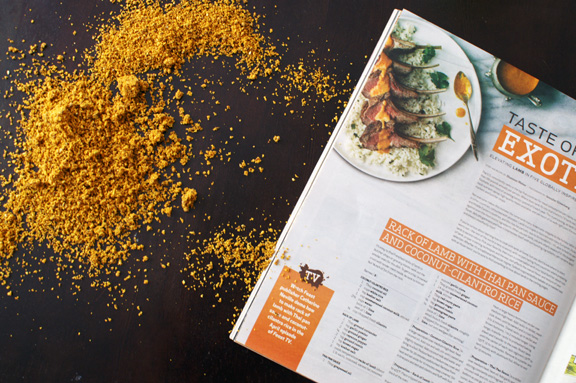 I think I’m going to let the article speak (mostly) for itself this time (a cruel lie: I ended up with many words); I worked hard on it, and the finished product came out beautifully in both the pages of the magazine as well as online, and I’d like you to see it. I’m going to talk about the recipes in a different way than I usually do; break them out (and down) a little bit.

I took no photos aside from a few shots for reference, so I have nothing for you to look at, and if I did, it wouldn’t measure up to the beautiful shots Jennifer took of my food for the feature, so I’m not even going to try. Also, cheers to whomever edited my piece in the article for their brilliant addition of the word “mutability” – nicely done. That’s quality grammar in action, friends.

There’s a common theme which seems to run through the blog as well as the column, but it’s especially prevalent in the features: I like to put a bunch of small recipes together to form one big recipe. Anyone ever noticed I do this all the time? I do. There’s a line in Justified (TV series, FX network) when someone says to one of the main characters “Man, I love the way you talk… using 40 words where 4 will do.” Replace “talk” with “cook” and “words” with “recipes” and that’s my cooking style, in a nutshell.

Look closer, and you’ll notice something else. Maybe you’ve already noticed, because some of you? You know me. These aren’t just small recipes designed to form one big something; rather, all of these recipes – and this holds true for almost any of my multi-part recipes for Feast or the blog, but especially for Feast – can stand alone, or be matched to something entirely different. True story.

I don’t make anything that’s a one-trick pony: all my recipes are workhorses in some way. Multitaskers able to drop into all sorts of things and make them awesome, if you just let them. You want to see? Allow me to break these lamb recipes apart for you and show you how much you can do with them.

Although designed in the recipe to throw in the pan after the rack has left it, you can make this without having the leftover flavor from the lamb and its rub to work with. Make the sauce in a skillet, and pour over anything: it’s particularly delicious with chicken and sturdy white fish. If you’re feeling festive, chill it down and add it to some shredded cabbage and carrots for a Thai-inspired slaw perfect for fish tacos.

Do I really have to explain the wonders of coconut-cilantro rice? It’s got flavor everywhere, and way more exciting than ordinary rice when used as a base for stir fry. I like to use it in lettuce wraps too, or burritos, or whatever. Coconut cilantro rice has almost limitless potential when you’re trying to make your weeknight meals more exciting without adding more work.

These things are herbed to perfection with a marinade of oregano, thyme, and garlic: can’t get much more classic than that. Grill them up and serve them with roasted red potatoes, potato salad, pasta salad, grilled asparagus, the world is yours with these.

I take a great deal of pride in my dressings, and this is one of my favorites. Sometimes with creamy dressings you get lots of thickness but not a ton of flavor; this one is bursting with herbs and spices that accentuate whatever you throw it on. Outstanding on unadorned greens, or make it a little thicker and you have a rock-star dip for crudités.

An Egyptian spice miracle, if ever there was one. If you’ve never had dukkah, you should try it immediately, because well…it’s sort of indescribably perfect. There’s a warmth to it that’s curry-like, and yet it’s not truly “curry-flavored,” – it’s exotic and familiar all at once, and it’s the best. make it exactly as I tell you to in the recipe, or branch out and substitute in ingredients you want to use until you find your perfect dukkah. Once you do that, store it in the fridge and use it with hummus, as a crunchy flavor bomb for roasted vegetables, your morning eggs (not kidding!), salads, whatever. Make it.

I’ve covered pomegranate molasses before, and buying the bottled variety is great in a pinch, or if you’re adding it to things like stews and things which employ it for its sweetness rather than it’s standout beauty. When using it like I do in the recipe, or in things where it’s more of a star, it’s essential to go the homemade route with it. Not only will you get amplified pomegranate flavor, but you’ll be getting the deep garnet-redness which can only come from making it fresh. My recipe for pomegranate molasses is one I employ all the time for things: sodas, dressings, drizzling onto random meats as a glaze (but you know that from this article), and just adding a little zing to fruits and vegetables. It just works.

I mean, lemon-tahini dipping sauce; there’s zero things wrong with that combination, and it makes a pretty awesome salad or slaw dressing (thin it out with water or a bit more lemon juice.) Maybe most obviously, it’s lovely dip for vegetables as much as it is for these koeftas. Try it with plain turkey or beef meatballs also, or throw your burgers a curveball by using this as the condiment along with some fresh spinach and tomatoes, and maybe a little feta, if you’re into it.

I was surprised at how much I loved this one, to be honest: sometimes side-dish grains are just that: sides, kinda lame, just laying there. Not this one, my friends: it’s filled (like to max capacity) with tender shallots, bright herbs, and dried fruits, and the combination of those things makes for a pretty standout couscous to pair with your normal roasted or grilled chicken, pork or beef tenderloin, or salmon. Marinated baked tofu would work nicely alongside this one as well.

And then there’s my North African Lamb Tagine, which has zero breakout components, but rather is my breakout lamb dish: making this one taught me how to (finally) french trim shanks the way a person should know how, and rewarded my efforts after three hours with the most sumptuous dinner i’ve had come out of my oven in a very long time. This is one everyone should try, and although it’s great in the colder months (I’m looking at you, snowbound Haligonians) I think it’s pretty amazing as a spring or summer meal, because there’s nothing heavy about this dish (aside from my 277 lb dutch oven you see pictured.)

With that, I’m done with lamb. And not done: I’m just starting with lamb, because after all that, I realized how much I’d been missing by not including it in our weekly routines. That’s changed: I think about lamb now in the way I would beef, or even chicken, because at the end of the day, it’s just as comfortable on a Wednesday night as it is on your Easter table. So think about using it more often; maybe try one of my recipes from this collection and see what you think. If you want to watch one get made, you’re in luck: the Rack of Lamb with Thai Pan Sauce got picked as the recipe featured in this month’s Feast TV episode. Locals, that’s this weekend on the Nine Network; everyone else, you’ll be able to view it once it’s available online. I’ll link you to it when it’s up.

*whew* okay! so back to our regularly scheduled programing. I’m still trying to nail down Easter brunch for this weekend, which is proving difficult only because I want to make everything I see online, and we’re only having about 5 adults at the meal. Excuse me while I whittle.