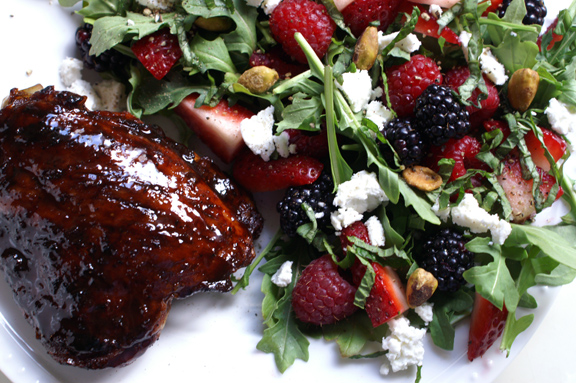 I’m a little late to the party on this one; we’re already 4 days into June, and for reasons relating to my Wee One’s first week home from school and general summer happenings, I’m just now sitting down to write this. This month’s Feast Magazine is a winner; I know this based not only upon what’s inside it, but by the haste in which people snatched it off the shelves this month. My go-to newstand was cleaned out by June 2nd, and the place I finally found them at only had a few left for me to grab: evidently we are a burger-cover-lovin’ type of people here in Saint Louis. I couldn’t be more proud, and that burger on the cover couldn’t be more seductive.

Because it’s summer, right? Grill season is here! Make all the burgers! I grew up here, and I can safely say that’s how the vast majority of us tackle summer. I smell grills and smokers firing up in my neighborhood on my midmorning walk most days, and the pool in my neighborhood is packed with people lugging their coolers and side dishes and tongs behind them, making the best of our sweltering days.

Some of my earliest memories revolve around summertime. My grandma had a pool to rival most neighborhood pools (not kidding; it was massive) and in the early eighties, most of my cousins lived in the area. Mom was unofficially in charge of the “de-bugging” of the pool (you know, when you do the little skimmer thing to clear off any bugs which have gathered overnight and subsequently met their doom thanks to the chlorine), so we ate breakfast – fast – donned swimwear, and headed over between 9 and 10 AM. As an early riser, this was never early enough for me, but I managed. Mom skimmed, my sister and I swam, eventually every other mom came over with every other kid in our family, and they sat around yellow fringe-decorated umbrellas at white metal tables while we did any number of acrobatics in and out of the pool. 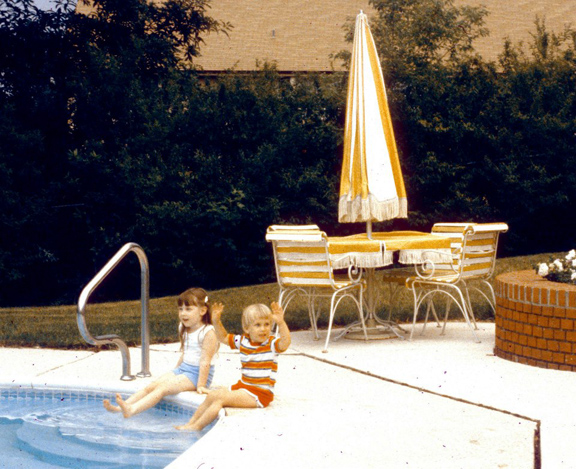 a glimpse of my childhood summers. that’s me on the left with my cousin.

If we got bored in the pool, my grandma owned the lot right next to her: a triple-roll of hills with flatland in between which was fabulous for winter sledding, but also made a pretty decent racetrack for competitive grass-rolling. We had a volleyball net, basketball hoop, tons of grass and field; it was like Olympic Village for kids, really, and it was a total blast.

And at the end of the night? Always grilling. Well, okay, sometimes fried chicken, but mostly always grilling. Back then, no one had a fancy grill that I can recall: like everyone else, my grandma had one of those pole-in-the-ground, black covered semi-rectangular numbers that grilled. the. meat. period. I don’t know if there were hot spots or cold spots, but I know there was fire, and we weren’t allowed anywhere near it when it was on, except if someone needed the spray bottle of water (which was omnipresent during grill time, and I still don’t know why).

Look, I can grill! Sometimes!

So grilling is an integral part of my summer. I myself don’t do it much, as this is probably the only realm of cooking I leave to Mr. Table, but I do love it, and the smell of lit charcoal makes me happy inside, not to mention a little nostalgic. This month, I put my grilling pants on for the magazine and made an entire dinner for you with pomegranate molasses, my “mystery ingredient” for June.

Have you used pomegranate molasses? I used it wayyyy back in the early days of this little space to make Bobby Flay’s chopped apple salad with pomegranate vinaigrette, which I trot out every autumn. I couldn’t find any of the prepared kind back then, so I made my own; easy enough, as it’s just pomegranate juice, sugar, and a little lemon juice reduced down to a thick syrup. Nowadays, I find it at well-stocked groceries (like Whole Foods) and international markets, as it’s big in Middle Eastern cuisine. It has a very punchy, tart flavor to it, and although it may not look it, it’s extremely versatile. This month, I used it as a simple glaze for grilled chicken thighs by cutting it with a little fresh orange juice, and then used a little more in a vinaigrette for a tangled arugula and summer berry salad. The salad is filled with basil and mint, a little goat cheese, some pistachios, and all the berries you could ask for, and the vinaigrette pulls it all together. The chicken is full-flavored and juicy where the salad is bright and airy; a perfect, satisfying balance for summers around the pool, and a total cinch to throw together. Both recipes play well with other things, too: pom-glazed thighs with classic potato salad is a great way to add a little zip to your plate, and the tangled arugula salad gives your burger a little bit of finesse. 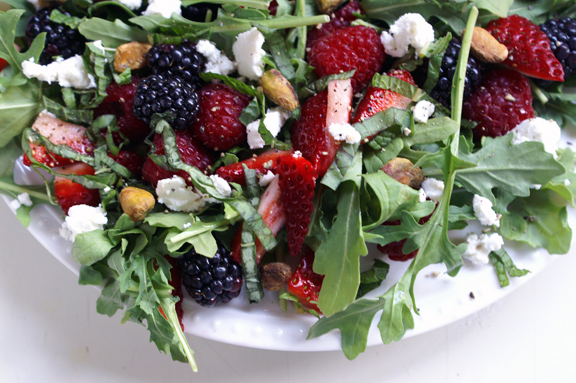 For the first time ever, I have a bonus recipe for you, making this a pomegranate trifecta. After almost a year writing the Mystery Shopper column, I think I finally exceeded my word count, and my third recipe (a B-side, if you will) didn’t make it in, so I’ll give it to you here. It’s a compound butter made with the pomegranate molasses, some orange and lime zest (fruit which you’ll already have from both the salad and the chicken recipes), and a little bit of sea salt. Throw some sliced baguette on the grill for a minute or two, then top with this butter to serve right alongside the chicken and salad.

June is great, isn’t it? It is. I’m navigating my first post-school year summer with the Wee One by making her a month-long “summer camp” at the house, complete with themed weeks and daily activities and crafts, but I’ll tell you more about that later. Here’s a few of my favorite things from the magazine this month:

If you’re local and haven’t picked up your copy of Feast Magazine yet, you better get out and find one, because they’re going fast this month. Head over here to flip through the online version, and head right here to see my recipes for both the pomegranate-glazed chicken thighs and the tangled arugula + summer berry salad with pomegranate vinaigrette.

In a medium bowl, add butter, pomegranate molasses, zests, and salt. Using a rubber spatula, work the ingredients together until the mixture is smooth and homogenous. Form the butter into a log and wrap in parchment or waxed paper; refrigerate until firm and flavors have blended.

Unwrap and slice into rounds; serve alongside grilled bread.