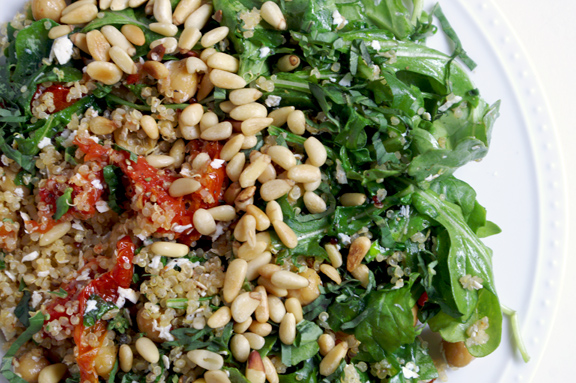 In the spring and summer, I’ve noticed a pattern: I go Greek. “Greek” as in Greek salads, homemade Greek dressing, Greek bread, ingredients I normally associate with Greece, and so on. I don’t know what nudges me into that Mediterranean mindset: maybe it’s that I imagine the best place in the world to be right now would be in one of those bleached-stone and-blue roofed hideaways in Santorini overlooking the sea. Maybe it’s that I love history, and Greece is as old as time itself. Maybe it’s just that I love the food.

For me, Greek food calls to mind unsullied sunshine, balmy temperatures, and sea air. It means fresh fish by the bushel and tons of fresh produce. I’m probably idealizing it, but if I am, don’t tell me: I want to keep it that way in my mind.

Since I can’t jet off to Santorini just yet, I thought I’d travel there with my own food; you can come along too. Do you remember that Andrew Carmellini Greek dressing I instantly loved? Friends, I’ve been making it ever since; there’s no other dressing out there for me but this one, and it’s worth every second of work you put into it. Very much like his barbecue sauce, I just make big jars of it and throw it on everything: between those two things, I’m completely summer-ready.

I’ve made you a few salads to throw that dressing on, if you so desire: there’s this one with zucchini noodles (and nooooooo, not the kind you make with that Spiralizer or whatever, I kick it old school with a mandolin and make what amounts to a zucchini paparadelle), and then there’s this greek panzanella, which I make and subsequently eat far too much of. because bread salads are the best salads. This time around, I’m making you an arugula and quinoa one. 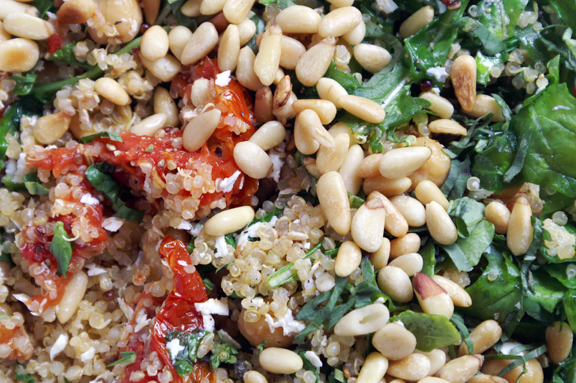 You’ll like it! First of all, if you’ve never thrown greens and quinoa together, you’re missing out, because it’s darn tasty, especially when those greens are wilted and warmed a little bit. And this salad is more than just that: you have some cumin-toasted chickpeas, some oven-roasted tomatoes, a little basil, and a healthy dose of toasted pine nuts. And if that weren’t enough, it’s all tossed with a cheese that’s as fun to work with as it is to say: mizithra.

For various reasons, I’ve been a wee bit obsessed with cheeses which do not melt; I’ll talk more about that soon. It’s funny when cheeses don’t do what most cheeses do, right? So often we associate cheese with being gooey and melty and soft that we forget that some cheeses just rebel and outrightly refuse to do what their cheesy comrades are doing. Mizithra is one of those rebels which refuses to yield to heat; rather than getting gooey, it retains its shape, making it ideal in warm salads such as this one. It adds a nice, soft flavor to the whole dish without falling apart, and I think you’ll love it. If you’re a fan of feta or any goat or sheep’s milk cheese, give this one a try. It may have the textural profile of a pink school eraser when it’s just sitting there, but it’s delicious.

So here’s my Greek salad contribution for this year: if you’re not a fan of arugula, sub in some kale (which will need to be cooked a bit longer to wilt it, but obviously if you love kale you know that), and if you’re not big into basil, try it with mint, or just do both. And it’s worth mentioning that on first glace, this recipe is going to look like I went prep-crazy, and okay, sometimes I do that, however: all of these components can be made ahead of time or skipped entirely. Roasting chickpeas with spices takes zero effort, and you could always just tumble them in bare. I don’t know about you, but I keep cooked quinoa in steady rotation in my fridge, and you could do the same. As for the oven-dried tomatoes, those also require almost no labor, so either make a big batch and freeze the extras in jars, or if you’d rather, just buy some jarred at the store. You’re missing out if you don’t make your own: just the smell of roasting tomatoes in my house is enough to brighten my mood most days.

If you’re wondering what to do with your extra dressing, I’ve thought of that also: my next post will be another Greek-ish thing which uses any leftover dressing you have.

Inspired by a recipe seen in What Katie Ate: Recipes and Other Bits and Pieces by Katie Quinn Davies, but thoroughly reworked enough to confidently call it my own.

for the toasted chickpeas:*

*if you’d like to cheat and just use regular chickpeas with no extra work, that’s fine, but at some point, try toasting them with the spices because they do add a great flavor layer.

**no time to slow-roast your tomatoes? I have a faster slow way to do it: simply cut your Romas into quarters versus halves, prepare as instructed with olive oil and season, and slide them into a preheated 315˚F oven for about 1 1/2 hours. I like them done the long way, but it’s a nice shortcut to a sturdy final product if you’re short on time and/or patience.

I feel like I should apologize for directing you to previous recipes for some of this, or for making you prep components, but truly, kitchen work is fun, right? And all of these things, from dressing to chickpea toasted to oven-tomato-ing can be done ahead of time. In fact, spacing out your work makes the finished product that much better.

OH! and for those of you who don’t read the entire recipe all the way through before starting, shame on you. What I actually mean to say is that I like to serve this particular salad “family-style” on a large oval platter or something similarly grand: it exits the pan almost like a salad rainbow due to the varying weight of each ingredient, and it would be a shame to mess that up by trying to divide it out onto 4 plates right away. Serve it up all together with big utensils and let people help themselves.

That is, if you haven’t already. Add the raw quinoa to a fine mesh strainer and rinse a few times. A must, people: if you don’t know this by now, quinoa has a particularly soapy taste to it if you don’t rinse it off before cooking it. Once rinsed, add it to a medium saucepan with 1 3/4 cup water and a pinch of salt. Cook over high heat until boiling, then reduce heat to low, cover, and let cook for 13 to 14 minutes. Fluff with fork and set aside.

Make the toasted chickpeas (while quinoa is cooking):

Heat the olive oil in a large skillet over medium high heat. Add spices and stir, then add the chickpeas and cook, stirring frequently until toasty and spice-coated, 8 to 10 minutes. Set aside.

I only throw this in here to make sure you prepped everything already, because the last thing you want to be doing is toasting nuts or slicing up basil leaves when it’s time to eat. I’m a total fräulein about this, but so is Movita Beaucoup, and she’s right: she’ll actually chastise you using the French mise en place, which roughly translated, means “get your act together.”

Did you prep everything you were supposed to? Is it all out and waiting for you? Proceed.

Heat olive oil in a very large skillet over medium to medium-high heat. Add quinoa, tomatoes, and chickpeas, and heat until warmed through. Add the mizithra and arugula, tossing it constantly together until the arugula has wilted just slightly (because it will continue to wilt after removing from heat.

Tumble the whole thing out onto a large serving platter, and let things fall where they may. you’ll notice things end up in rough lines due to each ingredient’s weight, which makes for a nice presentation that you had very little to do with. Sprinkle with toasted pine nuts and basil ribbons and serve immediately alongside Greek dressing (which I like to let everyone do themselves also).