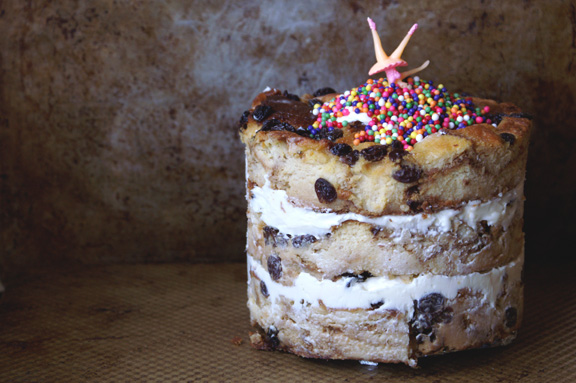 Well, friends, it’s that time of year again: one of my favorite people/bloggers, Rachael (aka Movita Beaucoup) turns another year older, and we all get to celebrate by making ridiculous cakes in her honor. I’ve done two cakes so far for her: this crazy miniaturized bakeshop thing and this cereal-turned-into-donuts one, both of which were incredibly fun to make, even if they didn’t win. And they didn’t win, people: I manage to lose every. single. time.
This year, the theme is crappy cakes: all we had to do to is enter a crappy cake into the competition. As luck would have it, I’m pretty crappy at making a crappy cake, because my need to do everything correctly? let’s just say it doesn’t translate that well into screwing up a cake purposefully. I’m also prone to intense overthinking, and as the translation of “crappy” could mean myriad things, I struggled to interpret what she meant. Crappy like bad? crappy like gross to eat? Crappy to whom and in what way? On and on it went. 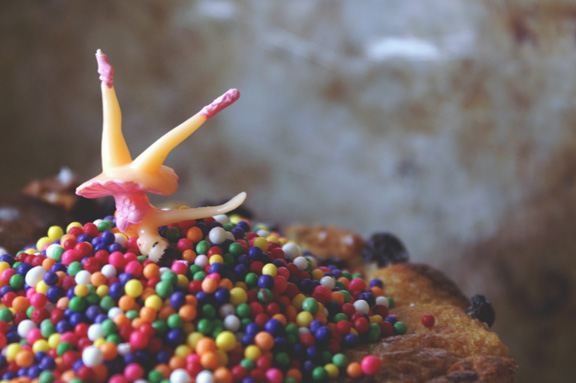 So I decided that my crappy cake would need to cut right to the heart of the matter: this cake needed to be crappy in the way that it would freak Movita out with how crappy it was. It needed to be her own worst nightmare of a cake; an insomnia-inducing masterpiece of horror, specifically tailored to her own idea of what terrifyingly bad is. 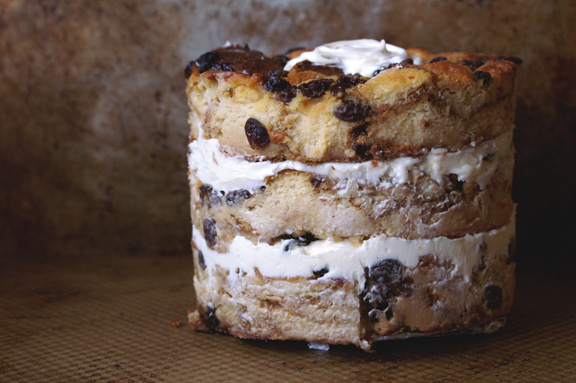 I have to say, I think I nailed it. If you know Movita, you know she loves food in general, but also has some very specific dislikes. Those dislikes don’t fall so much into the “hey, I’m just not a fan” category as they do the “I will roundhouse kick you if you make me eat that” category, and I made sure to address those with this cake. The components (of horror): 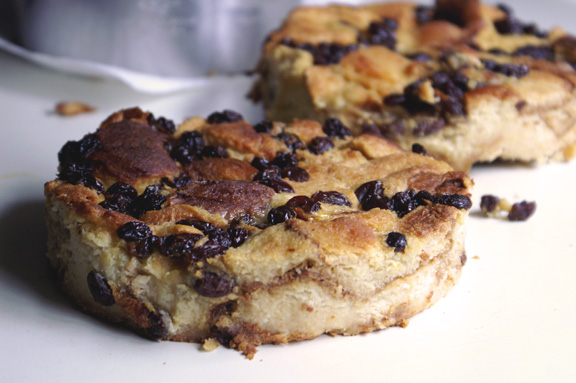 1. Bread Pudding – Yes, my lovlies, that’s bread pudding, stacked up three layers tall. I used this very standard, easy recipe from The Kitchn as my base recipe, baked it in a big 9 x 13 inch pan, and cooled it completely. Then I used my 6-inch cake ring (the one I use for all the Momofuku cakes) and employed the same principles of layer cakes as Momofuku does: two perfect layers and one cobbled together one for the bottom. A quick milk soak for the bottom layer helped seal it all together, and I layered it up with cream cheese frosting.

Why is this horrifying? Well, it isn’t, and if you’re a bread pudding enthusiast, this cake may be your dream come true. But Movita abhors “soaked” baked goods: she cringes at things like bread pudding, tiramisu…basically anything spongy you decided to soak with liquid is enough to make her begin to shudder. So an entire cake (and she loves cake) made out of something she loathes? It’s just cruel, really. 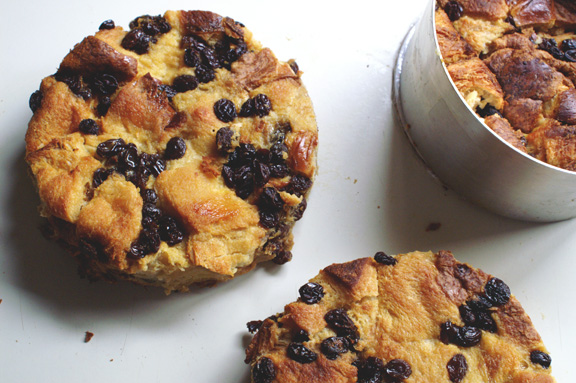 2. Raisins – Have you ever heard her go on a rant about raisins? You’d think they used to beat her up when she was a small child. Dates as well; you could say she’s just not that into them, if by “just not into them” you mean “hates them with the fire of a thousand suns.” Especially when you hide them in baked goods…which is exactly why I did that here. What you see before you, swirled throughout the bread pudding layers, is approximately one boatload of raisins. It’s filled to max capacity, and i doubt there’s a way to eat even a bite of this without getting a few of those little shriveled grape carcasses in there. And all that soaking and baking and hanging out in moisture makes them extra soft and smushy, just the way she likes them.

Why is this horrifying? As I mentioned, if there’s anything Movita hates more than a bunch of innocent raisins hanging about, it’s when they get all up in her baked goods. I would have put dates in here as well, but I really felt the raisins were pretty effective here. Just look at them: it almost looks like one of those kids’ ant farm in there. 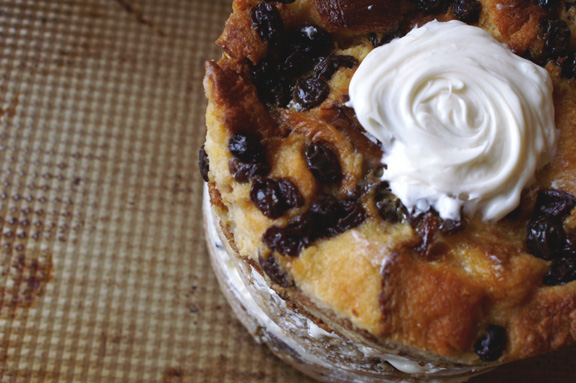 Today is the first day of voting: I have zero idea who my competitors are at the time I’m writing this, but I’m understandably apprehensive because I have zero idea how anyone else translated “crappy.” Also because I never win, but you can change that this time by *ahem* voting for me maybe? Scoot on over here to see entries as well as the little note I wrote to Movita explaining why my cake is the crappiest ever. 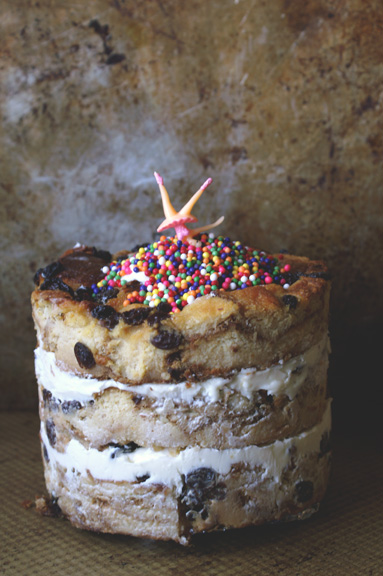 Pick your favorite cake; it would be great if mine was your favorite, but I’m still going to love you even if you think someone else’s is better. Then vote for your favorite cake; it’s that simple. I guarantee you it’s going to be a friendly competition because we do it for Movita and not really to win. I feel like I won no matter what happens, because I made a layer cake out of bread pudding; have you ever seen that? nope.

If you’d like to make this cake, by the way, it’s super simple. I won’t even type out the recipe as much as i’ll link you to how I went about it. Here’s what you do:

1. Use this recipe from The Kitchn – it’s totally customizable and comes out of the oven beautifully. I used my day-old tsoureki leftovers and one of those King’s Hawaiian rounds you can get at most any grocery store. I wanted to have it semi-uniform, so i used a knife to cut it into 1 1/2 cubes versus tearing it up. I upped the cinnamon a little in it, because upping cinnamon in recipes is basically my calling card. When you prepare it, really press it into the pan – like really use some force there, because you want it as dense as you can so your layers cut cleanly. I baked mine for a while longer (probably due to density), but when it’s a nice burnished color on top and has a good puff to it, take it out. If you’re into raisins, they’re really good in this: I added a decent amount, and sprinkled them in while i was turning the bread into the pan as well as over top after I added the liquid.

2. Use this cream cheese frosting –  it’s delicious with the vanilla-cinnamon flavors of the pudding, and it doesn’t make it overly sweet. In fact, cream cheese works well here specifically because it gives it almost a frosted cinnamon-bun feel. Add a bit of cinnamon into the frosting if you want to.

3. Use a 6-inch cake ring – does it seem foolish to own a cake ring? it isn’t; I’ve used it lots of times for projects like this, and it’s nice to have a petite cake at gatherings versus a hulking 8-inch thing taking up table space. You wouldn’t believe how adorable a 6-inch cake looks in real life, and you really need one to get these layers uniform. And you can forgo the usual acetate strips here that i use for the momofuku cakes; you can actually build this cake sans ring and have it work, but it does work better with the acetate, so use it if you have it. Acetate or no, make sure you use one of those 6-inch cardboard cake boards so you can easily maneuver the cake around. If you want to see how I layer one of these, see this post; lots more components in it, but you’ll get the idea.

4. Decorate the top – you like that? Very time-consuming: take one jar of extra big sprinkles and dump onto a circle of frosting. It’ll stick in a mountainous way, and the frosting circle base will hold the sprinkles on there even when you cut into it. If you’ve got an old-fashioned ballerina hanging around your house, go ahead and stick her headfirst into this cake: she’ll love it, just like Movita would love to dive right into this masterpiece.

And there you have it: My once-yearly foray into random caking. If you’d like to see what everyone else did, head over to Movita’s blog and check them out. Make sure you vote for the one you think is best while you’re over there: it’s always fun for us to battle it out in the stats throughout the day, and you throwing your vote into the pile just makes it that much more interesting.