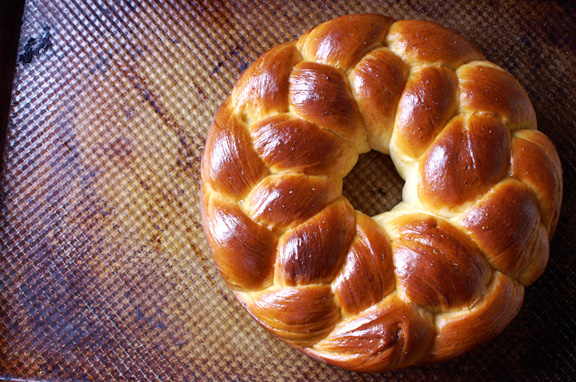 Hello, and welcome to perhaps the only recipe I’ve ever made which makes use of not one, not two, but all three of your stand mixer’s standard attachments. Hooray! It’s like the Holy Grail of Baking.

People of Greece: I want to thank you for this bread. Thank you for making this an essential part of your Greek Easter celebration, thank you for its incredible flavor, its delightful sweetness, and most especially for my ability to make it on my very first try without utter failure. I would have cried had it not worked out, because just the scent of the dough was enough for me to long for it. Seriously, this may be my most favorite sweet dough ever. And I’m going to show you how to make it. 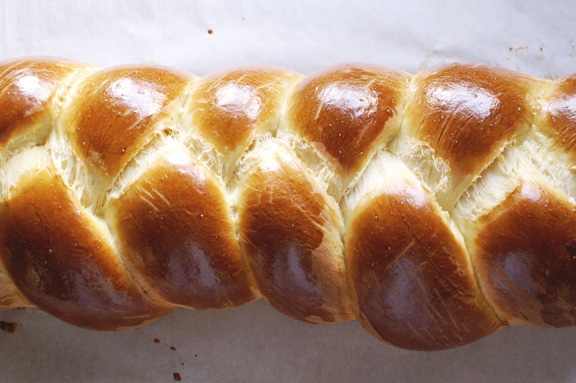 Have you ever had tsoureki? I came across it while researching mahlab a few months back. The mahlab experiments resulted in a pretty awesome pannenkoeken recipe, but I tucked tsoureki away until now because it’s a traditional Greek Easter bread and I don’t know that there’s a single Greek thing I don’t love.

Including the Greeks themselves, as it turns out. Tim has a cousin who is half-Greek (a result of his side of the family marrying into a mega-Greek one), she lives in our neighborhood, has a kid the Wee One’s age, and is the closest thing to a sister-in-law that I’ll likely ever have. And she’s a hoot: she’s the marathon-running frick to my sometimes-exercising frack, the vegetarian yin to my cake-batter yang, and I love her as much for our differences as our similarities. Her family gatherings are loud, jubilant, and somewhat jarring to someone of my ilk (generally quiet, anxious in large crowds), but I love going all the same. And they love me too, although this is perhaps due to my willingness to let them flagrantly violate my personal space and regale me with uninterrupted tales of…everything. Whatever it is, it’s a cultural learning experience, and I’m a better person for it. 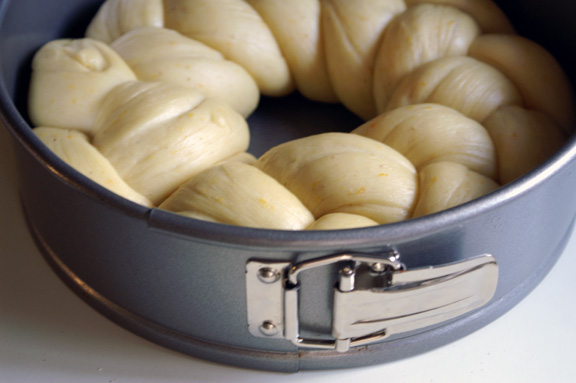 So my plan was to make this bread for my cousin as a surprise treat for Greek Easter, because I had a feeling she’d love it. Turns out, I couldn’t wait that long, and I’m happy I didn’t, because now maybe you’ll make it for your own Easter or Greek Easter celebrations. it’s dead simple to make, as far as breads go (obviously there are simpler things), and I swear your kitchen will smell like you’re baking angel wings for most of the day once you pop this in the oven. I can’t go on enough about the scent: it’s a mixture of orange and almond and vanilla and delicate sweetness, and it’s intoxicating.

And that’s precisely what’s in it: a little orange zest and juice, some vanilla and almond extracts, a wee bit of honey, and my killer secret ingredient: mahlab. As I just mentioned, it’s in that beautiful cheese-filled, lemon blueberry-sauced pannenkoeken you saw a few weeks ago, but I promised you another recipe with it, so here it is. Seriously, I know no one needs another spice to keep around, but this one you really do need. I find it works especially good in lifting breakfast pastries to another realm of flavor, and this bread is no exception. It adds a cherry-almond note to things like this that’s impossible to duplicate with anything else; it’s like everything you make with it turns into the best sweet Danish dough ever, miraculously, with nary a bit of the work which goes into making Danish dough. And it comes in little seed-looking things, which you get to pound with a hammer when you’re ready to use them. I call that “stress relief.” 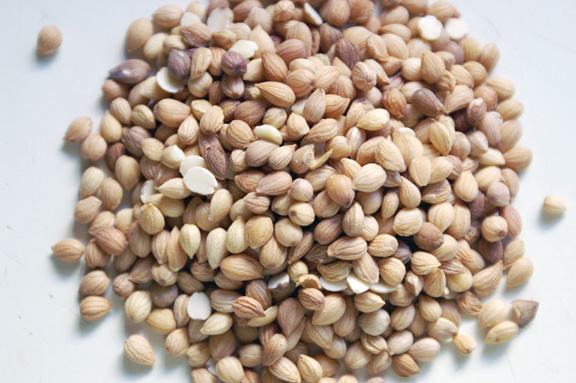 So yay for Greeks, because they’re the ones who are responsible for mahlab (truly, it grows in Greece), and because of them, this bread exists. Now to show you how to make it. Some of you saw my photos on Facebook and Instagram and wondered if perhaps I was a robot. I am not a robot, as a matter of fact, and i’m not even good with bread braids mostly, but this dough made it way easy on me. Here we go: some tips to make your bread look like fairies made it. 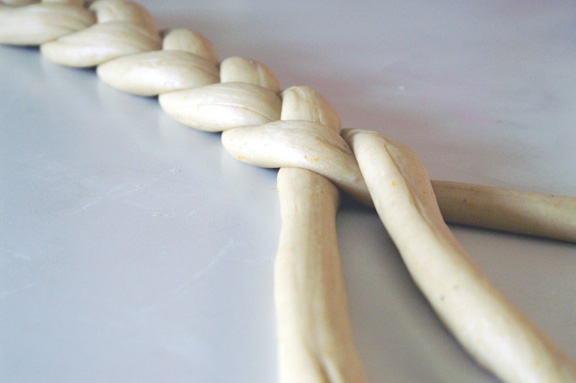 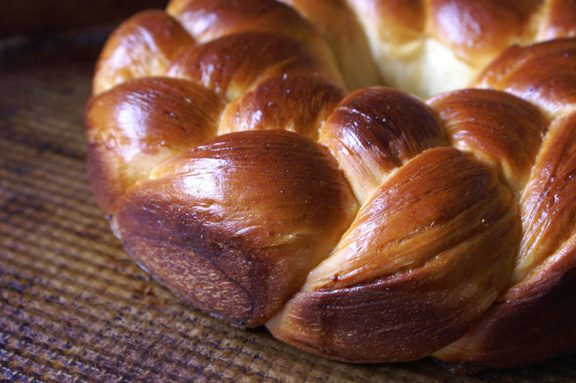 Can this bread be made without the mahlab, because you don’t have a Penzey’s Spices near you and/or you don’t need one more thing to do before this weekend? Sure. It will be missing that unique little kick of flavor I was talking about earlier, but it will be delicious all the same. I still say you should buy some, because between the pannenkoeken and this tsoureki, you’ll use it up quickly. And then you’ll want to buy more, because perhaps the best part of tsoureki? 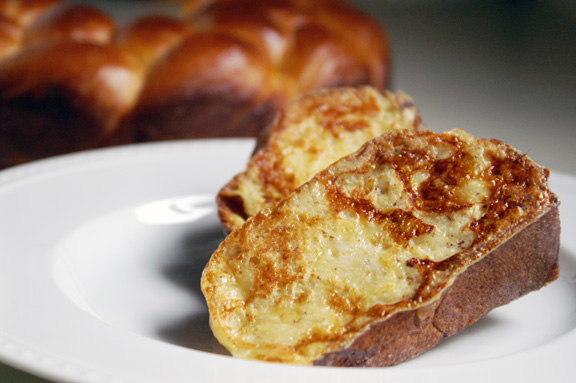 I don’t know if you’ve ever thought about french-toasting an orange and almond-scented sweet bread with a bit of cinnamon and maybe some orange compound butter or maple syrup, have you? You are thinking about it now, so…dust off those mixer attachments. 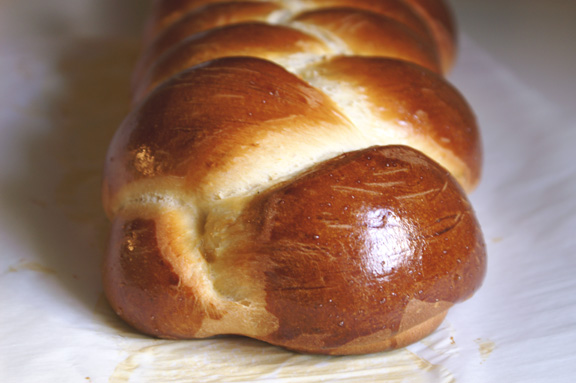 If you need any more reasons to make this, I did end up gifting my Greek cousin-in-law with this bread last week, on the day it was made; in fact, it was still a little warm from the oven. It was a warm day, so me and the Wee walked it over to her house, and while the kids played in the front yard, she cracked open the loaf. I looked on in amazement as my health-nut, calorie-counting, simple carb-eschewing cousin pulled off piece after piece of this bread with her hands and ate it, sans anything, in the driveway.

Adapted from Martha Stewart’s recipe for tsoureki, which was a sturdy recipe to start with, and fun to mess with. I took a great deal of liberty in the preparation and with some of the ingredients. Note to Martha: next time, include the mahlab.

Stir sugar and yeast together in the bowl of a stand mixer fitted with the whisk attachment. Whisk in warmed milk and let stand until foamy, 5 minutes. Stir in 1 1/2 cups all-purpose flour until mixture is combined, scraping down the bowl as needed with a rubber spatula. Cover with plastic wrap and let sit for 30 minutes, until bubbly.

Place your mixing bowl back on the stand (if you removed it to a warmer climate) and fit with the paddle attachment. With the mixer on medium-low, add the eggs, one at a time, mixing well after each addition. Add the all-purpose flour mixture and stir on low until incorporated. Add the butter and wet ingredients (give them a brief whisk just before to unsettle any honey sticking to the bottom) and continue to mix until combined.

Remove the paddle attachment and replace with the dough hook, scraping off excess dough from the paddle attachment on its way out. Gradually mix in 2 cups of bread flour, 1/2 cup at a time, scraping down the sides of the bowl as needed. Continue to add the final 1 cup of bread flour a little at a time until the mixture forms a soft, slightly sticky dough that pulls away from the side of the bowl. Don’t be heavy-handed with the last bit of flour: you want a soft, pliable dough, not a dry, tight one, and you can always add, but never subtract.

Once you’re done adding flour, increase speed to medium-high and mix until dough is very smooth, about 8 minutes. Remove the dough from the bowl using a rubber scraper (it works well for this) and form dough into a ball. Roll it around the oiled bowl until all sides are coated, then cover tightly with plastic wrap and let rise in a warm place until 1 1/2 to 2 times its size, about 1 1/2 hours.

I don’t have a “warm spot” truly in my kitchen; seems as though a good amount of air circulates through it, which is fabulous for everything but proofing. I DIY a proofer by boiling water in a teakettle, adding it to a mug, placing the mug in the back of my microwave, then placing the bowl of proofing dough into the microwave and closing it. Not only does it provide a draft-free, warm environment, but it gets a little humidity in there as well. Works every time.

Remove dough bowl from its warm home, uncover, and punch down the dough. Cut the dough in half with a large knife or bench scraper, then cut each half into 3 equal pieces (I do this by shaping it into an even rectangle and eyeing it up). Cover 3 pieces covered with plastic wrap while you work with the remaining 3. Gently shape each piece into a rough log with your hands, then roll it out into about 24 to 30-inch long ropes, working slowly so your dough rolls out evenly. As I mentioned above, if you notice your ropes shrinking when you remove pressure or feel them pull against you, leave them sit for a few minutes and come back to them.

Place the ropes next to each other, pinching the ends on one side to seal. Tuck ends under for a smooth finish, and spread out the ropes as wide as possible on your counter. Loosely braid your ropes together, laying one strand on top of the other, not pulling or stretching them. You want a braid free from gaps, but you don’t want to strangle it either. Adjust your ropes throughout so they stay wide on your work surface, which will make for a more even finished product. When you reach the end, pinch the ends together and tuck them under as you did the other side.

If you’re making straight loaves, simply transfer the braid carefully onto a prepared sheet pan. If you’re making springform rounds, transfer to the prepared pan, leaving  about a 1/2 inch of space between the outer edge of your bread ring and the perimeter of the pan. Cover each loaf with a kitchen towel and place back in your warm spot to let rise until doubled in size, about 1 1/2 hours, give or take.

Aha! I do not have two microwaves, and therefore I do not have two warm spots to head towards. In this particular situation (which happens often with bread), I simply do the same coffee cup/boiling water method, but in my actual oven. When it’s time to turn the oven on, simply move the dough out and to a different warmish spot; by then, it’s already well on its way to gorgeous, so nothing to fret about.

Ready your egg wash by lightly beating an egg in a small bowl. Preheat oven to 350˚F and place a rack in the lower third of the oven. I refuse to bake most anything more than one sheet at a time, and this is no exception. Pick the one loaf which looks the most ready to go and gently brush the entire thing with egg wash. Place in the oven and bake for 25-30 minutes, checking at the 20-minute mark until loaves are a deep golden brown and sound hollow when you tap them. As you look at the braid expanding, the inner crevasses should still be light golden and not at all overdone; see the photos above as a guide to what you’re looking for. Remove from oven and transfer to wire rack to cool. Repeat with remaining loaf.