I did something exceedingly stupid the other day: I purchased food products at Williams Sonoma. Not spices or sprinkles, mind you, which I could easily play off as “necessary” or “practical,” oh no. Instead, I walked out of that hallowed place with two things I had no need for: a box of Bouchon Chocolate Chip Cookie Mix and some Vanilla Wafer Butter. I’ve turned the former into an experiment which we’ll be discussing today; the latter I refuse to discuss at all. Still ashamed.

Let’s talk about these high-end instant things you can get at places like Williams Sonoma and Sur La Table, among others: have you ever given into that particular urge? Why or why not? You know you’ve thought about it, because we all have, if even for a fleeting moment, considered picking up that Sprinkles Cupcake mix or Ebelskiver batter, just to see what it’s like. Is it really easier? Less messy? Better than you could produce from scratch? If the Bouchon box cookies are any indication, the answer to all three of those questions is no.

To justify the $20 cost for what ultimately amounted to about 16 cookies (seriously), I decided to run an experiment between the box mix and the recipe for the exact same cookies in the Bouchon Bakery cookbook. Although it’s impossible to measure the elements in the mix individually, given the yields listed on each as well as the control amounts of butter and egg, they very much are intended to be the same recipe. Because this was an experiment, I altered nothing about either recipe, preparation included. I even measured out eggs by volume, which is something I swore never to do. Ever. But I did that for you, and in the name of science.

The only thing I did not do was use European butter as suggested, because, realism.

The boxed mix gives you three packets: flour/leaveners packet, sugars/vanilla packet, and chocolate chips/chunks packet.  Since I couldn’t break out each component which was already packaged, I compared what I could, given that the yields matched from book to box. The differences: 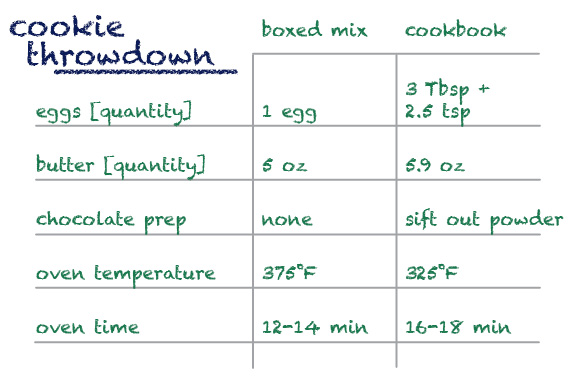 Beyond that, there are differences in preparation. Predictably, the steps in the Bouchon cookbook are slightly more detailed than on the box; that’s acceptable, because someone with the cookbook is prepared to make a true “from scratch” cookie, and you have to assume that someone purchasing $20 box chocolate chip cookie mix isn’t in it for the craft of it; they want the end result, and they want it now. I’ll chalk up not sifting the chocolate to remove excess powder to that theory as well, though one could argue that if it does make for a better cookie, and you want a repeat customer, you would tell them to sift, or at least make it optional.

I don’t understand, however, the difference in ingredient quantities and oven temperature. baking something at 325˚F for 16-18 minutes versus 375˚F for 12-14 minutes will give you very different results, especially with chocolate chip cookies, which – in my experience – both spread and puff based on how high and for how long you cook them. And while I understand that 1 egg (boxed mix) versus 3 tablespoons plus 2 1/2 teaspoons (cookbook, and for me, that came out to a little over one egg) is negotiable, I think 5 ounces (10 tablespoons) versus 5.9 ounces (a smidge under 12 tablespoons, or 1 1/2 sticks) would have enough of an effect on the end result to warrant using the latter, if all other dry quantities are the same. Just to see what’s what with the cooking times and temperatures, I baked half of these at 325˚F and half at 375˚F to see which yielded a better cookie.

So which is the better cookie? I’m thrilled you asked, and I’m equally thrilled to tell you that you can keep your $20, if you’re willing to do a bit of measuring. Truly, that’s the only extra work in this, because you’re still creaming the butter and sugar, adding the dry and the chips, and portioning it out, box or scratch. I’m never buying these again; in fact, in my future trips to Williams Sonoma, I may glide past them and secretly giggle, because I know they’re not as magnificent as their cookbook counterparts. Here’s why:

I’m not saying go out and spend $30-$50 on the Bouchon book, either, although it’s a worthwhile investment if you’re really wanting to challenge yourself and learn more about the inner workings of baking and pastry science. They’re hardcore, and the book takes everything seriously, from how to cream your butter to how best to make fancy breads (I can’t even open that chapter without involuntarily weeping in fear, but I’m working my way up to it). I will relay the recipe to you, which – because I don’t use European butter or Callebaut chocolate – is only the smallest whisper different from the original. These cookies are a marvelous example of why to consider adding the book to your collection: you have to work at it, and you may even need to do things you wouldn’t think of doing, but when you taste what these cookies are like, you’ll understand why I refer to Mr. Thomas Keller as Mr. Thomas Keller. Because he’s a mad genius, and his baked goods taste like angels fashioned them from the heavens.

I know we all have a chocolate chip cookie recipe, but these will haunt your dreams, I promise you. And sometimes it’s fun to see your trademark family cookie held up to a professional standard, because you can think of ways to make improvements on your own. Or not, but it’s always interesting to see and taste the differences.

And they will haunt your dreams, I promise.

Adapted only in the slightest way (does .1 oz of butter and some mini chocolate chips count?) from the Bouchon Bakery Cookbook by Thomas Keller and Sebastien Rouxel.

Chocolate Chip Cookies (titled as if they were just normal, although they are supreme)

*You knew I wouldn’t really make you do this, correct? This was an experiment, and because I wanted the most accurate results, I did indeed beat lightly and then measure my eggs out. What I’ll tell you is that my “large egg” yielded the 3 tablespoons, and the 2 1/2 teaspoons came from an additional egg. If you don’t want to measure, I’d say you could either get approximate results from an extra-large egg, or just round slightly down to your own large egg, but i wanted to give you exactly the measurements I used. I do not believe that it’s going to make or break the cookie one way or the other.

**Because it’s not something which was easily measured, I couldn’t measure out chips versus chunks in the experiment. However, “chocolate chunks” in stores seem to always be larger than the boxed mix had, and the mix felt overloaded with chocolate. Using miniature chocolate chips here works very well for variety as well as getting that chocolate balance correct.

In a large bowl, whisk together the flour, baking soda, and salt. Set aside.

In a medium bowl, whisk together the brown sugar, granulated sugar, and molasses. Set aside.

In the bowl of a stand mixer fitted with the paddle attachment, beat the butter on high for 2-3 minutes, until it is creamy and whipped. Add the sugar mixture and beat on medium-high for 3-4 minutes, scraping the bowl as needed, until mixture is light and fluffy. Scrape down the bowl again, and add the eggs. Mix on low speed for about 30 seconds until combined, then scrape down the bowl again. Add the flour mixture in 2 parts, mixing on low speed until each addition is just combined. Remove the bowl from the stand and use the spatula to scrape down into the bottom of the bowl to incorporate any dry patches you see. Be thorough; it’s important for an evenly baked cookie.

Place the oven rack in the center of the oven. Line a baking sheet with parchment paper.

Using 2 1/4 inch diameter ice cream scoop, portion out 6 cookies onto the prepared sheet pan, spacing them about 3 inches apart. Place the remaining dough back in the refrigerator and bake the cookies for:

Remove pan from the oven and allow cookies to cool for 10 minutes on the pan, then transfer cookies to a wire rack to cool completely. Repeat with remaining dough.