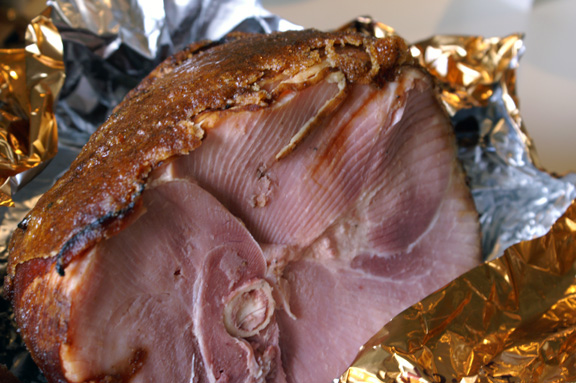 Sponsored post experiment time! Round one, as it were: in this one, I’m testing out all the gifts HoneyBaked Ham sent me as part of the “stress-free holiday” package (we’ll see about that!) and giving you my (very honest) opinion of each thing. We don’t eat our ham until Christmas night, so I’ll probably be doing something fun with the leftovers and posting that as well, après-ham feast. Let’s get right to it: 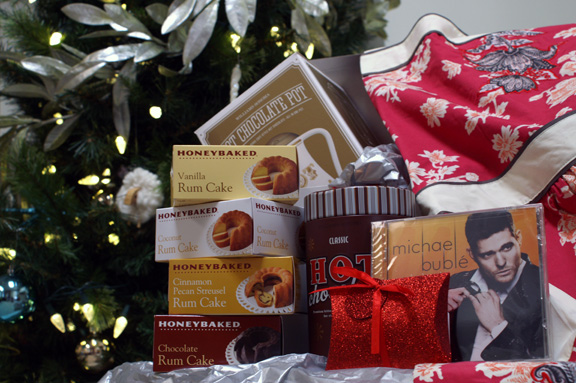 Ordering/Retrieval of HoneyBaked Ham: So when I called the HoneyBaked store to order my holiday ham, I was convinced it was actually Santa Claus: sooooo jolly. Not to mention ridiculously helpful in letting me know what size ham I needed based on the amount of people I was having, etc. When I told him this was going to be on a gift card that his company sent me, and that this was going to be permanently filed on the blog, whoa: I mean, super excited. If this dude is any indication of how my #stressfreeholiday is going to go…prognosis: excellent. Where was this guy when I was freaking out about early december deadlines? I wonder if he does personal assistant work on the side.

Going to pick it up was more difficult, only because I forgot my gift card the first time. As for the staff, they were way more than prepared to assist me – twice – in obtaining my ham. We were offered samples of everything from roast turkey to red velvet cake (yes, thank you), and they got me in and out without a hitch. As for the ham itself, it’s a stunning tribute to hams everywhere: beautiful, with a crunchy crust on the outside, and super flavorful inside. I told you this in an earlier post, but we get a HoneyBaked ham every year, and we always love both the actual meal with it, as well as the leftovers. They really do take the stress out of holidays: honestly, I like to cook as much as all of you, but I’m trying to wrap presents, create the last of the food gifts, and dress a Wee One for parties. The last thing I need to do is  triumphantly ruin the main course, and that’s where HoneyBaked seems to really fit in to our celebration. Plus, Christmas day for us is pretty lazy: maybe some cinnamon buns, one of us may roll in to the kitchen every so often to grab a cookie, but other than that, not much goes on. We like it that way.

By the way, did you see that enormous ham up there? Did you see the crust on it? The best way I can describe it is a honey-clove crispy exterior that could easily be picked off an eaten by itself, if behavior like that were allowed. 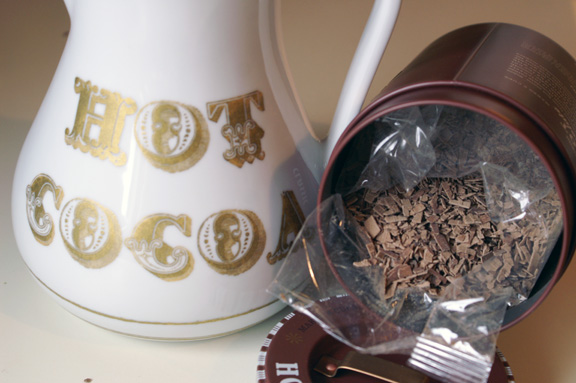 Hot Cocoa + Rum Cakes: Speaking of, my mom and sister came in yesterday (Sunday) afternoon, just before the airports started to get pretty ugly. We had a happy hour that evening of the four (yes, four) miniature rum cakes HoneyBaked sent me, along with the Williams Sonoma hot chocolate kept warm in my very lovely WS hot cocoa pot. 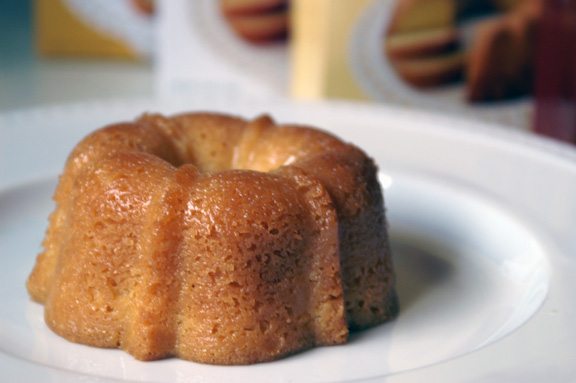 And happy it was: what a ridiculously cute piece of kitchenware I never knew I needed! They had these when I worked at Williams Sonoma one holiday, and I didn’t get the point. Well, friends, the point is this: no more cold, sediment-on-the-bottom hot cocoa for you, no no: you just warm the ingredients in the microwave, pour them into the pot, and then push the button on the lid: instant whippy cocoa for everyone. My mom has likes it so much she’s threatened to steal it. And did I mention how incredible these rum cakes are? They’re all nicely balanced (not too much rum, which is gross) and perfectly dense and delicious. I highly recommend both the chocolate and cinnamon streusel versions; our clear favorites of the bunch.

Even the ‘Bubs was impressed by the rum cakes.

Anthropologie Apron/Michael Buble CD: of course I wore my Anthro apron the entire time: it’s an Anthropologie apron, and it’s adorable. It’s like I’m dressed up for cooking, which is wonderful, and when paired with a Michael Buble CD you just feel fancier somehow. I will say that although I think any music from the ‘Bubs automatically knocks your blood pressure down a few notches, I like a good christmas CD this time of year. This wasn’t holiday music, but rather him doing mostly covers of other artists’ songs. Which we enjoyed, and technically this was also stress-reducing.

We’ll be eating our glorious ham (which is taking up a good amount of space in my refrigerator at the moment) in a few days, sitting amidst piles of presents from each other, and we will be happy. If you want a better visual of what we’ll be looking at, here comes a wee christmas house tour: 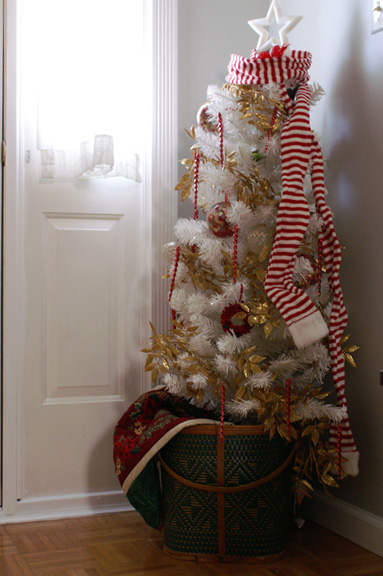 the smallest of the trees… 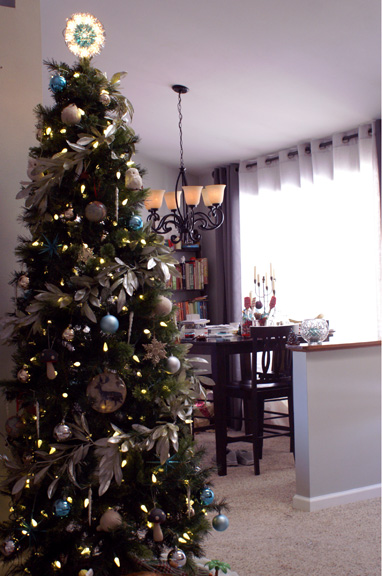 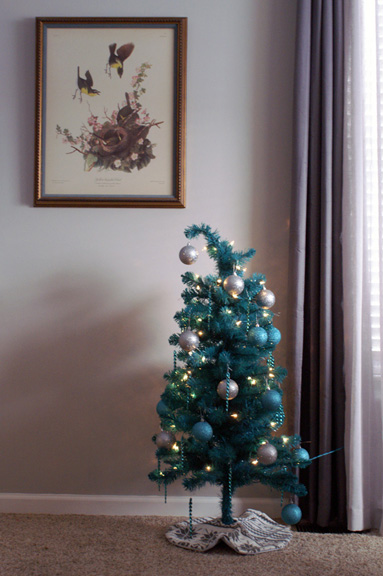 and the blue tree, which the Wee One decorates and un-decorates, depending on her mood. And those are just the trees in the main area of the house. 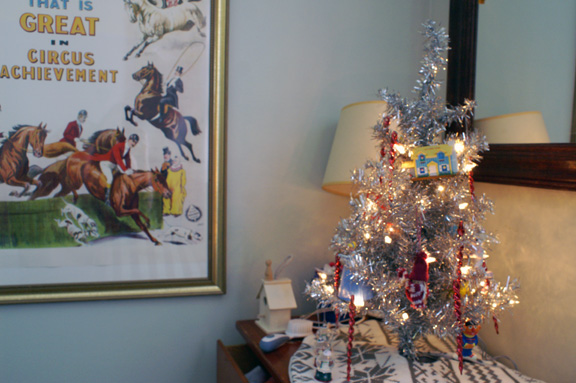 This is the tree in the Wee’s room, although it’s difficult to capture its’ majesty on film, it seems. 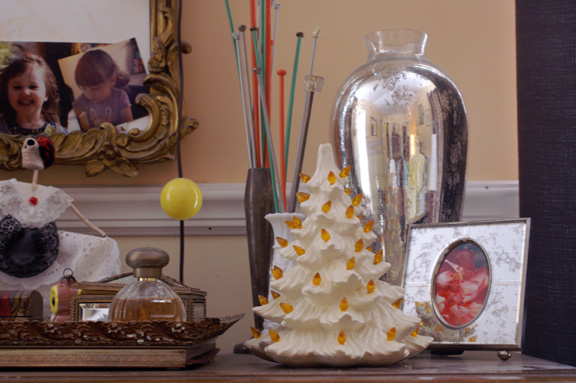 This is the tree in my room, a ceramic number from my collection of them. A rare white albino, and one of my favorites.

My other white albino is in the kitchen, along with some vintage marching band musicians. And the ever-present owls, and my favorite green ceramic (snow-tipped!) 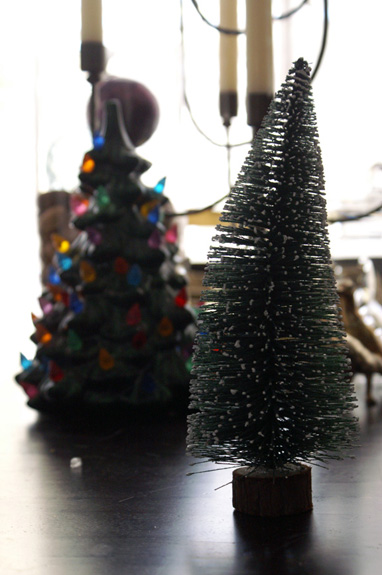 Trees everywhere. I love them. 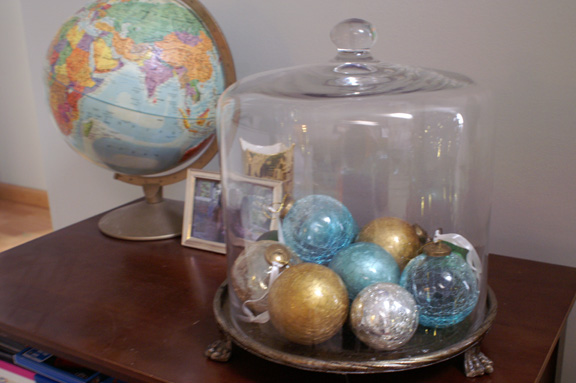 We also have some random crackle glass ornament gatherings going on. I collect them because I think they’re beautiful.

I made the Wee a quickie advent calendar this year, which basically amounts to double-sided scrapbook paper stapled into pockets, stamped with numbers, and strung on some yarn. She loves it. Meanwhile, I’ve been drawing each day of the advent for her on her easel. 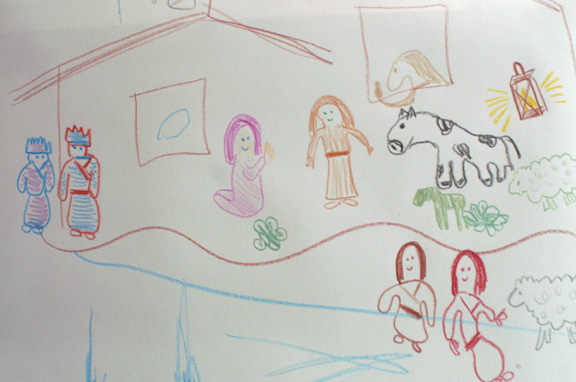 It’s going well. I can draw better on flat surfaces: my cows look less like spotted pig-horses, and I have a better sense of horizon lines. Before you ask, I have no idea why my shepherds are dancing a jig. 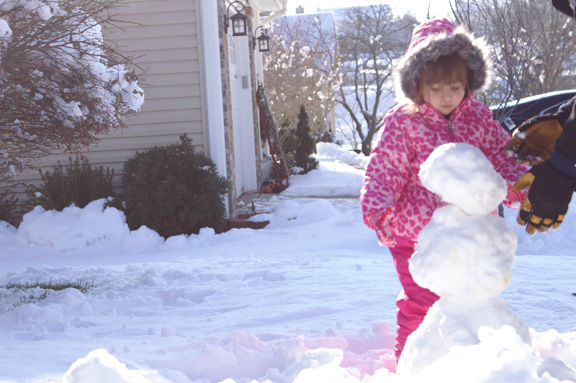 It snowed! It’s melted now, but it was a nice, thick pre-Christmas snow that really got us in the mood to celebrate. This was the Wee One’s first legit snowman. Oh, and in between making him and drinking hot chocolate? This happened.

See those random people walking up our street? They were carolers. We got straight-up caroled as we made our child’s first snowman. They saw her and started laughing and pre-sang their way up the cul-de-sac for her. Then they sang the song they planned on singing (“Joy to the World”) to everyone else, and then? Then came back down the street, stopped in front of her and her snowman, and sang, you guessed it, “Frosty the Snowman.” All the verses.

And that concludes the house tour. I’ll talk more about my experience with sponsored posts, start to finish, later this week, when we’re all actually paying attention again. For now, the happiest of Happy Holidays to you all. I hope wherever you are, it’s snowing or appropriately chilly, you have tons of gifts, friends and family, and an absurd amount of delicious things to eat. I hope also that some of you are getting carol-bombed like we did; that’s the best.