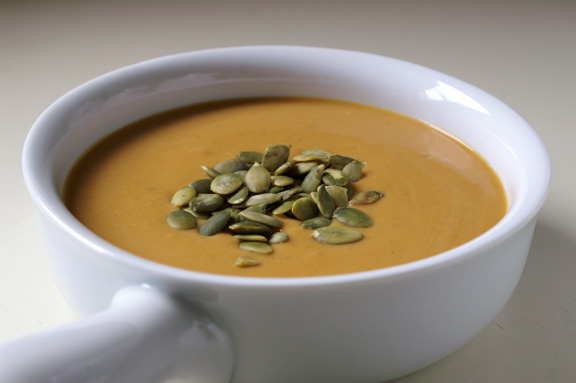 I feel like the Midwest has reached the Official Second Tier of Chilly for the season: I can see the puffs of breath and car exhaust in the morning, we rarely leave the house without some sort of sweatshirt or coat on, and the days are brisk and mostly sunny. I’m making the most of things until Daylight Savings Time kicks in, which will signal the end of our evening walks (as it will get dark by 5 pm, a total bummer for someone who walks regularly and really loves this time of year for it) and the start of much shorter days. I know for certain that it’s soup weather: I’ve been wandering through cookbooks searching for new ones to try.

As it happens, the one I wanted to try was right in front of me: at Panera Bread, of course. Seasonal soups are their jam, especially in the fall and winter. They made a particularly lovely one this year: a butternut-pumpkin thing, all creamy and orange, and it’s fantastic. They’re not beating down my door to hand over the recipe, so I thought I’d wing it and see what happened.

Friends, I nailed it. And not in the “Pinterest: Nailed It” way, but in the “really, it’s delicious” way. I can’t call it a true copycat, because I substituted the pumpkin for sweet potato, because in my opinion, it’s more velvety and slightly sweeter than pumpkin. Besides, if given the choice, I’d rather work with sweet potatoes than fresh pumpkins anyway: less mess.

But back to the soup: it’s got an incredibly smooth texture, a nice balance of sweetness and spice from the garam masala and cinnamon, and it’s all finished off by a nice dose of cream at the end. I think lots of recipes call for  simmering chunks of squash and potato in stock: I’d rather let the natural sweetness come out by roasting them first. It brings out their flavor and adds a depth to your soup that you won’t get by simmering alone. Plus, you can do the roasting ahead of time, and when you’re ready, you only need to simmer the whole thing together for a half hour or so when you’re ready to make it.

Another nice thing: no vegetable prep beyond the squash! There’s no onion, garlic, mirepoix, nothing to do. It may sound like I’m skirting around some essentials here, but i think soups like this – thick, spicy-sweet ones – benefit from not having all the extra clutter running around in there. Let the vegetable stock do the work for you: that’s what it’s there for, and you’re going for subtle here anyway.

It’s a phenomenal soup for right now: everything is at the height of its season, and it’ll warm you up on those cold days and evenings which lay ahead. I’m making another batch for Halloween night, because I know it’ll be the perfect thing to come home to after freezing my randomly-costumed self off trick-or-treating through the neighborhood.

Oh! And if you want a different take on a soup like this, I made a smoky sweet potato + apple soup years ago; it was one of the first recipes on the blog, and still one of my favorites. It’s a more savory one, with leek, ginger, and chipotle involved, and as it was before I branched out a bit, the sweet potatoes are simmered rather than roasted, but you could easily switch that up by roasting them ahead and then following the instructions from the simmer point on. And if you look closely, you’ll see it’s adapted from a 2011 Martha Stewart Living magazine. How appropriate considering our recent discussions here; fate has stepped in and reminded me that it was one of her successes in my kitchen. 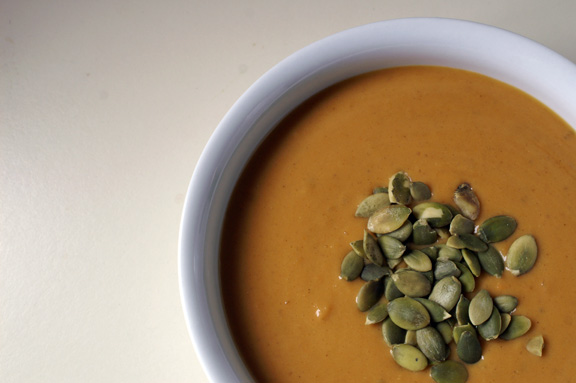 And a note about the pumpkin seeds over top: I always have raw ones in my pantry, because I use them for crunch on many things. Feel free to use the roasted and salted sort, or try making your own spiced-up roasted version  from my dear Amy over at Elephant Eats: the heat from them would add a nice little kick to the finished dish. And try not to be too distracted by the incredibly awesome pumpkin she made, which is also in the zesty pumpkin seeds post; as far as I’m concerned, she won the internet with that gorgeous thing. She’s an artist, friends, and in so many ways.

My own recipe, but one inspired by the Fall 2013 Vegetarian Autumn Squash soup at Panera Bread right now. If you want to test-drive this before you make it, head over there and grab a bowl. Mine has a bit more spice to it, but they are very similar.

*butternut squash sizes and quality depends largely on where you are in the world, and what season it is. Autumn in the Midwest means i have butternut squash the size of small infants, but other times, they’re barely 1 pound. Weigh it out, and if you can’t find one small enough, go for broke and buy a 5-pounder, roast both halves, and save the other half for another use. Obviously a 3-pound squash won’t hurt you here, either.

**because you’re not doing the whole mirepoix thing with this, it’s important to choose a vegetable stock of high quality. I like Kitchen Basics unsalted vegetable stock because it’s dark and hearty, and of course unsalted, because I like control of salt content. Please use your favorite, but if you don’t have a favorite, that’s a solid one.

Preheat the oven to 400˚F. Line a rimmed baking sheet with aluminum foil (or not, but I prefer that to a big mess directly on the pan.)

Using a large, sharp knife, cut the very top and bottom off the butternut squash. Stand it on its base, and slice it in half lengthwise. Scoop out the seeds and stringy things with a spoon, the drizzle the whole thing with a little olive oil. Place skin-sides up on the baking sheet.

Poke each sweet potato with a fork about 10-12 times or so, all over each one.

Place the squash in the oven on a middle rack, and place the potatoes, unwrapped, alongside the squash pan, directly on the rack. Position a rack underneath and lay a sheet of aluminum foil directly under the potatoes to catch any sugar drips.

Is that dumb to do? I don’t even know if anyone does that, but I do it, because I got tired of cleaning burnt sweet potato sugar out of the bottom of my oven. also, I like to roast them directly on the rack because I feel like they roast evenly. All of that could be superstition: if you have a better way to roast sweet potatoes, use it.

Roast vegetables for 1 hour, or thereabouts, until tender. The potatoes should take the entire hour: the squash, depending on size, may take less. Check it at the 30 and 45-minute marks to see how it’s doing, and remove it if need be.

Once everything is done, remove from the oven and allow to cool slightly so you’re able to handle it without burning yourself, 15 minutes. Once cooled enough to handle, use a large spoon to scoop out the flesh of both the butternut squash and sweet potatoes (discarding the skins, obviously.)

In a large dutch oven (or large soup pot), add the apple juice, vegetable stock, and honey. Whisk together over low heat until combined, then add the roasted squash and sweet potatoes. Using an immersion blender, whip the entire thing together until everything is lump-free and silky smooth.

Alternate plan: you obviously don’t need an immersion blender for this, but I love mine and it’s a sound investment if you make soups frequently. If it’s easier for you, throw the roasted squash and sweet potatoes into the bowl of a food processor and pulse until everything is smooth, then add the puree to the liquid. Off you go.

Turn the heat up to medium-high and bring to a simmer. Add the garam masala and cinnamon and season with salt and pepper to taste; remember, this is your first round of seasoning, so don’t go crazy. Adjust the heat to keep the soup simmering, and let it go for about 30 minutes. Check your soup at that point for thickness and flavor: if you think it needs more time, keep simmering in 15-minute increments until it’s the way you like it. Once the soup has reached the desired consistency, check the seasonings; add more as you see fit.

Remove from the heat and stir in the vanilla and cream. Once everything is evenly incorporated, check the seasonings again, and season according to taste.

Serve immediately, scattering some pumpkin seeds over top of each bowl.