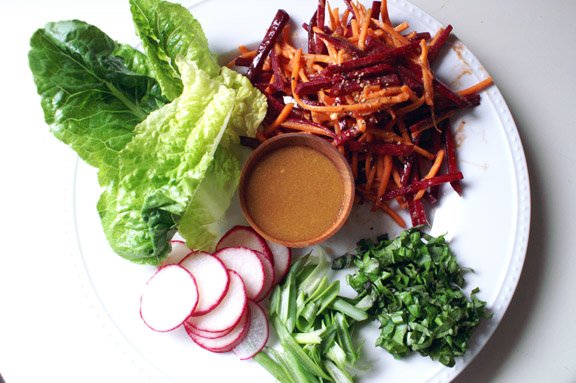 The October issue of Feast is on the stands! Which means I am also on the stands (and on your internets) with a new Mystery Shopper article. Thankfully this month, I remembered to take my own photo of the dish when I made it; since my column is about featuring the ingredient, the finished dish photo for these posts will be up to me. This month, the magazine delves into the awesomeness which is Asian cuisine: there’s ramen, dumplings, a sushi step-by-step, Japanese cocktails, and a user’s guide to choosing one of my favorite kitchen tools, the spider basket. There’s also a stunning feature on one of our esteemed local chefs, Kevin Willmann of Farmhaus (Did you know Nigella Lawson ate at Farmhaus during her 2010 book tour? She did) and his becoming one with the sea. He catches fish, he prepares it beautifully, and it’s a great read on the depth in which he cares for food, where it comes from, and how it’s treated. As if that weren’t enough, there’s some stunning photography courtesy of the wonderful Jennifer Silverberg (who also photographs my column), my official girl crush where photos are concerned. Someday, with a whole lot of luck and practice, I will take photos half as good as hers. 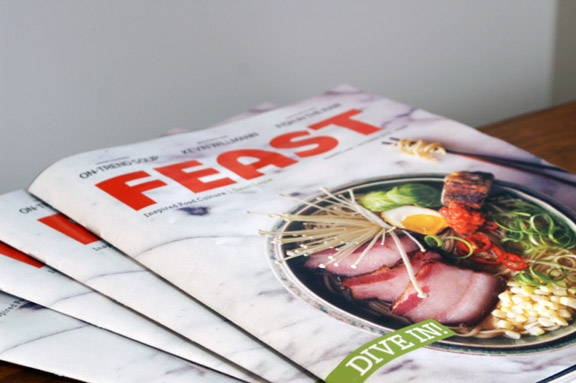 This month’s Mystery Shopper ingredient is white miso, which was fun one to work with. I have previously had miso, but had never gotten around to working with it, so it gave me a good opportunity to get to know it in a recipe way. I have to say, miso’s a pretty fantastic ingredient to have in your refrigerator: you wouldn’t necessarily think of it as a kitchen staple, but there’s so many things you can do with it. I made an autumnal lettuce wrap with a miso dressing, and they’re filled with beets, carrots, herbs, scallions, and a little bit of radish for bite. The dressing itself has whiffs of orange and ginger in it, and works incredibly well with the earthiness of the vegetables in this. It makes for a pretty fresh lunch this time of year; hearty but not heavy, and salad-like, but with more oomph, somehow. I’ve made this a few times for myself, and although there’s some chopping and prep, it can all be done ahead of time and thrown together for meals for days; exactly what I do when I want a fast lunch during the week. 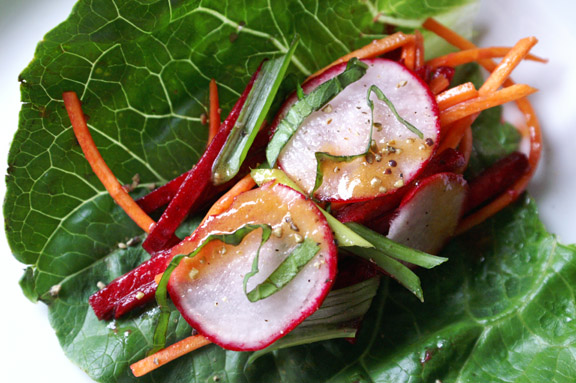 I urge you to try this one for yourself: don’t be afraid of raw beets here, because they have a lovely snap to them that goes well with the carrot and radish here. This one is addictive; I’ll give the miso credit for that. The recipe for my wee lettuce wraps is right here, and be sure while you’re over on Feast to check out October’s Feast TV segment: it’s wonderful, as they always are. Emmy-nominated, friends: as in, the Emmys. Just saying.

So check out my little recipe for Root Vegetable Lettuce Wraps with Citrus Miso Dressing. It reminds me of that Chinatown Turkey Salad I made last November: totally seasonal, but with a freshness to it that’s perfect for right now. I love it, and I hope you do too.