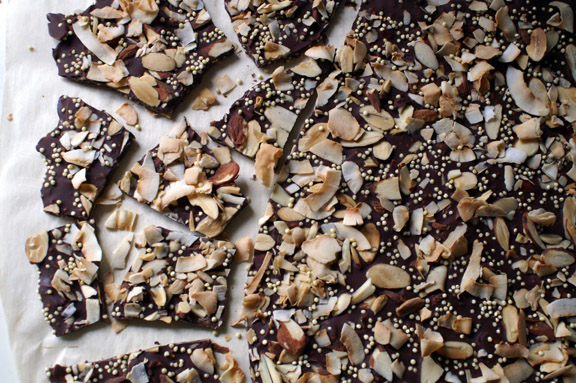 I’ve been meaning to tell you about this bark. It’s terrible, when I hold out on you, particularly when it’s something this easy and this good. Did I mention that, as far as chocolate bark goes, it’s pretty good for you? There’s that too, so you can feel good about making this repeatedly for yourself and others. If you give this as a gift (which you should) and the receiver throws their hands up in protest, mumbling something about holiday calories and winter weight gain, be sure to tell them not to worry, because this is arguably the healthiest chocolate thing they’ll eat this season. Except if they eat Willow’s chocolate avocado mousse, but someday, those avocados? They’ll be gone. And you don’t want to be left with nothing. 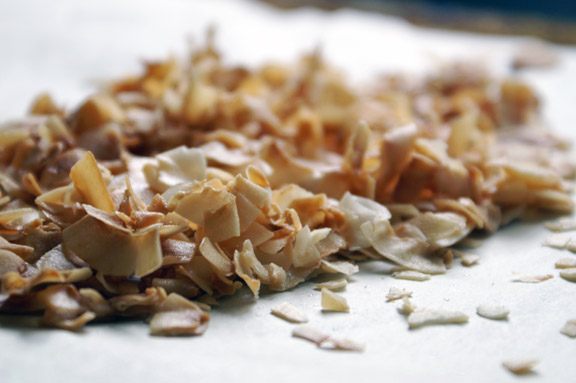 I call it “toasted bark” for short, mainly due to two of the main ingredients – coconut chips and slivered almonds – being oven-toasted ahead of time. It’s got a specific cosy warmth to it that you don’t find in most bark, like a big fisherman’s knit sweater. It’s packed with flavor, yet deceptively thin: since half the ingredients are inside the chocolate and you spread it thin, you get full-on chocolate richness without gobs of chocolate making you ill. Plus, I’ve added my new favorite baking ingredient; millet.

Ever hear of millet? It looks a lot like couscous, and has a similar nutty flavor. It’s tiny, perfectly round, and crunchy. You prepare it much like you would quinoa, and it’s delicious that way – so many things you can do with it cooked, and we’ll get into that in future posts – but it’s pretty delightful raw. You can throw it in baked goods like muffins to give them a little crunch. Seriously! Faygie made fig + millet muffins on her blog, Life Tastes Good, the other day, and I made them within 24 hours of her posting them. We’ve been going back and forth comparing notes on that Gwyneth Paltrow cookbook we both have been cooking out of, and I fell in love with these muffins instantly. 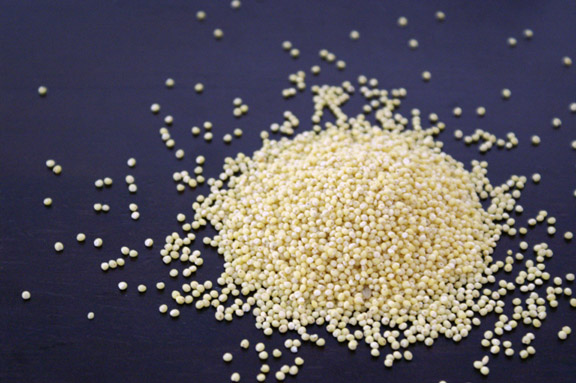 Millet is pretty special in terms of crunch; if you’re scared, they have an incredibly subtle flavor when raw, and up against hearty toasted coconut, almonds, and dark chocolate? Non-existent. Millet isn’t here for flavor, it’s here for crunch, and it adds a special crackle to the finished product, like little hippie nonpareils. Am I thinking of using them on frosting? I am so thinking of doing that, yes.

Meanwhile, I leave you with this bark. Elizabeth over at Eating Local in the Lou gets full credit for reminding me to tell you about this: she made delightful coconut muffins over on her blog the other day, and was raving about Trader Joe’s roasted coconut chips. The ones I get are raw coconut chips, because I’m, you guessed it, a control freak who likes to control the toast. You should be able to find them at your local market (especially if they have an organic or bulk/specialty foods section), and Whole Foods carries them. These aren’t to be subbed out for sweetened shredded coconut, by the way: that’s a whole different thing, and although it’s great for in some things, it’s not going to be as good as the coconut chips are in this. Seek out the chips, please.

Inspired by a recipe from It’s All Good: Delicious Recipes That Will Make You Look Good and Feel Great by Gwyneth Paltrow and Julia Turshen, the very same cookbook as Faygie’s Fig + Millet Muffins, although my bark is different enough that I think “inspired” is the best word here.

You can make this using the chocolate levels you prefer: I’ve customized it to be a nice, strong dark chocolate combo without it being too bitter. If you like it a bit meaner, use all 70% chocolate. Like it more like a chocolate chip? Use all 60% or just go with a semisweet. Whatever you use, try to use a good-quality one; I like Ghirardelli, and it’s what I used here.

This recipe is easily doubled, tripled, or whatever if you really want to go for it. It’s why I make bark as a christmas gift every year: it’s super easy and you can make as much at a time as you have sheet pans for.

Toast all the things:

Melt all the chocolate:

In a heatproof bowl set over a pan of just simmering water, melt the two chocolates together, stirring occasionally until smooth. Ready another half sheet pan by lining it with parchment, or do what I do and reuse one of the parchment sheets from either the almonds or the coconut.

Add 1/3 cup toasted coconut chips, 1/4 cup almonds, and 1/4 cup millet to the chocolate, stirring until everything is coated by the melted chocolate. Pour the mixture in the middle of the sheet pan, spreading outward until it’s around the size of a quarter sheet pan (10 x 13 inches) or thereabouts. Be sure to spread it as evenly as possible, keeping everything evenly distributed throughout.

Sprinkle the top evenly with the remaining almonds and coconut, then top the whole thing off with the remaining 1 tablespoon of millet. Place in the freezer for at least 20-30 minutes to harden. If your freezer is a skinny one, the refrigerator will work also; just make sure it stays in the fridge for at least an hour or two to get nice and solid. When it’s ready, take it out and break it apart into pieces.

You can store this, tightly covered, in either the refrigerator or freezer for a week.