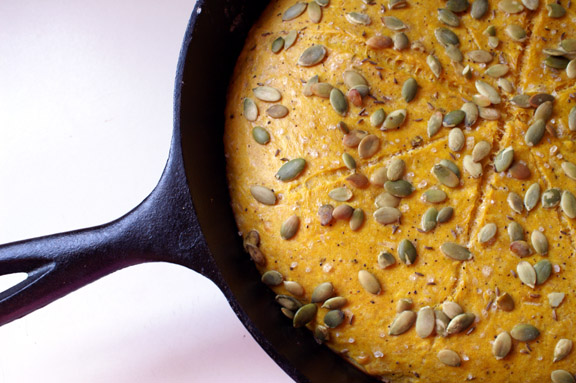 Please allow me to introduce to you my opening shot for pumpkin season: the pumpkin pan scone. It’s not what you think, for there’s not one speck of cinnamon, allspice, or ginger to be found here. Nary a sprinkle of sugar in this little guy; just pure pumpkin, in a semi-savory dish perfect for any time of the day or night.

I’ve realized in the past few years that we (and I mean “we” like Americans) sometimes have too narrow a view of pumpkin and what it can do for us. We’re perfectly willing to whip up all sorts of squashes and root vegetables into savory dishes, but the pumpkin? Always the sweet treatment. Which is great, by the way, because I love it this way; I happily count myself amongst the pumpkin-spice-crazy crowd. Custard pies, cheesecakes, bars, you name it: sweet and delectable, to be sure – but there’s so much more it can do.

Even the Aussies freak out over pumpkins, as evidenced in the current Donna Hay Magazine; Issue 69 here in the States. The entire magazine is filled with gorgeous recipes (as usual), but the pumpkin section is not to be missed. It’s brimming with all sorts of different pumpkin things to make, and every one of them is intensely savory; not a sweet one in the bunch. Fine by me, because I plenty of sweet pumpkin recipes on my list to try already. I could use some savory numbers.

This pan scone seemed like a wonderful one to start with. I’ve never made scones in a cast iron skillet; excellent idea, right? perfectly round, with a lovely crust on the bottom and sides. Then the worry set in: I am notoriously messy with things which I have to roll out and subsequently transfer, and this called for it. Not even just once, but twice. But my fear was completely unfounded, because it was a breeze to transfer this dough, and, by the way, very easy to roll out to the correct size. If it’s too small, you can stretch it a bit; too big, and you can just scootch it together once both layers are in. Truly there’s almost nothing to it, and you end up with a very impressive-looking scone.

As for the taste (in case it’s difficult for you to imagine, given the ingredients), it’s very mouth-filling in that distinctly pumpkin way, with a sweet ribbon of ricotta running through the middle which almost makes it lighter. The caraway works along with the pumpkin seeds to give it that seedy crunch, and obviously caraway gives it a whiff of rye flavor without overdoing it. The piney citrus of the juniper berries pair nicely with the darker caraway, and adds a bit of overall brightness to everything. And yes, here’s that buttermilk again, this time in a scone, that really gives it a nice little soft, not-at-all-dry crumb. Some scones, let’s face it, are dry like the Sahara; this one is not at all that scone.

I mean it when I say it would be perfect for any meal; particularly for brunch, as I picture it alongside some ham, maybe an egg dish, and the like. It’s a great fall alternative to the fresh fruit scones we lusted after all summer long. Alternatively, you could serve it alongside a soup or salad (or both) for lunch or dinner, or as the bread in a full dinner.

So there’s my pumpkin thing: there will be more, don’t worry. Along with my other adjustments, I’ve cut out some time here by skipping the whole preparing and roasting of the pumpkin bit in favor of the canned version, which some very knowledgable people say makes no difference in recipes such as this one. I agree with them; no need for extra work here. 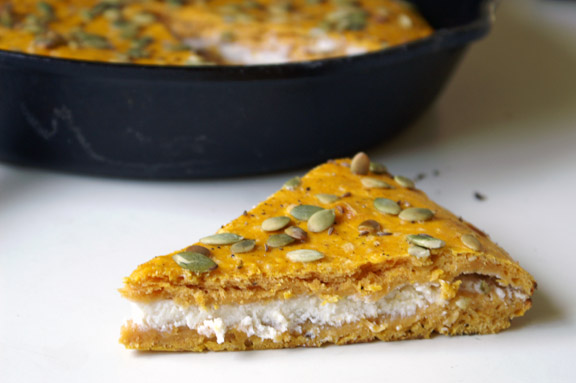 PS: I see your wheels turning, You, who are already thinking of ways to make a sweet version of this. I’ve thought about it too, and I’m sure it could be done; in fact, I may try it in my own kitchen, and if it works, I’ll post it.

Adapted from Donna Hay Magazine, Issue 69, which should be in at least the American and possibly Canadian bookstores right now. They also have back issues available on the Donna Hay Website. It’s not regular magazine price, at least not here: I can vouch for this particular issue in saying that I don’t think there’s one recipe in here (and there are tons of recipes) I wouldn’t love to make for myself. So, it’s worth the price. If you want to know what other things are in it, let me know and I’ll spill.

Juniper berries don’t just  get thrown into these types of recipes; they’re very big (hi, berries) and wouldn’t do much except for provide some of your guests with a weird surprise in their scone. To prepare them, place them in a small plastic bag and use a hammer or mallet to lightly smash them until open and flattened. Pour them onto a cutting board and finely chop them up, insides and outsides together. Now they’re ready to party.

Preheat the oven to 400˚F. I used a 12-inch cast iron pan for this, but the original says you could also use a lightly greased pie plate for this, with (I’m guessing) similar results. I’d stick with the cast iron if you have one, and if you don’t have one, you should: they’re fun to use, and inexpensive.

In a large bowl, whisk together the flour, baking powder, salt, 1 1/2 teaspoons caraway seeds, juniper berries (see note, if you didn’t already, on how to prepare juniper berries), parmesan, and pepper until evenly distributed.

Make a well in the center of the dry ingredients and add the buttermilk and pumpkin puree. Use a knife to stir gently until just combined and everything is evenly moistened. Turn out onto a generously floured surface – your dough will be sticky – and knead gently just until a shapely little dough forms. Divide the dough into two equal pieces and shape gently into rounds. Roll out one of the rounds to form a circle the size of your cast iron pan. Transfer it into the bottom of the pan, then spread your ricotta evenly over the top. Repeat the rollout process with the other round, transferring it over the top of the ricotta layer. Tuck in the edges and gently press them together to seal the perimeter. Use a small, sharp knife to score the top where you want to cut the scones into pieces.

Whisk together the egg yolk and the 1 tablespoon buttermilk, and brush evenly over the top of the scone dough. Sprinkle with pumpkin seeds and the remaining 1/4 teaspoon caraway seeds, then season with a little more pepper and some coarse sea salt. Bake for 22-28 minutes until done, checking at the 20-minute mark for doneness. When it’s baked, it’ll poof up a little in the center, be golden on top, and the scoring will be more visible (as you can see in the photos above.)

Remove from the oven and transfer the whole pan to a wire rack to cool down slightly. Serve while still warm; everything is still melty that way. I say this recipe easily serves 12-16 if involved in a meal; if you cut it into 8 slices, they’re pretty large. If it’s the only thing you’re eating, it could comfortably serve 8-10.