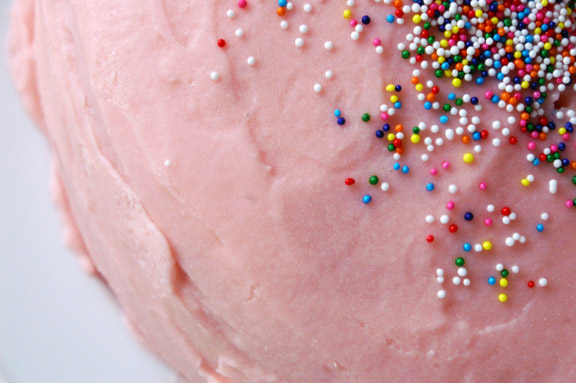 The biggest downside to food blogging? The nagging sense that if you don’t begin your pumpkin pear spiced cinnamon latte baked donut coffee cake posts by mid-August, that you’ve somehow missed the season. Either my planning game is off, or the rest of you are just really, really overachieving this year. I’m quite impressed, but stop it; you make a girl feel ashamed.

So while the rest of you are looking over a new recipe for apple pie butternut squash sage mac n’ cheese DIY turkey brine whilst sitting on your perfect back deck drinking cinnamon mai tai pear martinis? I’ll be over here. With a giant. pink. cake. Besides, I already made a butternut-apple thing – with cinnamon and the word “donut” in it – and I made that back in June because of the way deadlines work. 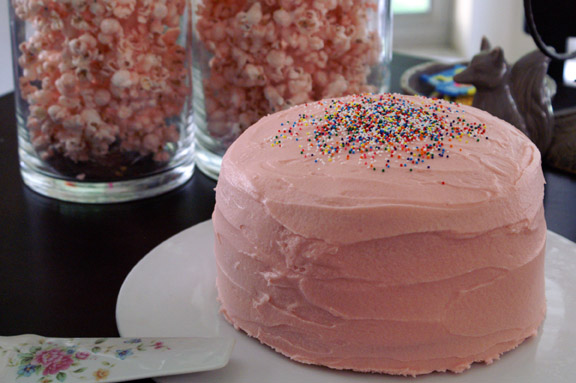 I needed to get that out; I feel better. I’m sorry: all of you have been doing some truly wonderful things that I love, but maybe next year one of us could grab a starter pistol from wherever you buy starter pistols (where do you buy starter pistols?) and there could be an official beginning of fall signal. It’s not the worst idea I’ve had. I plan to catch up very soon, but this cake is deserving of your attention, because it’s more than just a pink summer birthday cake: it’s the best vanilla cake I’ve ever made. I’m not saying it’s the best vanilla cake ever invented – I hesitate to ever say things like that; how would I know? – but I am saying that I’ve made my fair share of vanilla cakes, and this one wins. Big.

I can’t say for certain what makes this cake so marvelous, except that it’s taken from a place abounding with excellent deserts: the Baked Cookbook. Truly, if you aren’t afraid of slightly finicky recipes and lots of directions, you should own all three of their cookbooks; I can’t say enough about them. It’s never going to be a throw-together recipe with these guys (I’m convinced it’s just not in their nature), but it’s always going to be superb in the end. Simply put, Baked recipes will never let you down, but you have to be willing to work for it.

This cake is no exception; it was the most involved thing I did for the Wee One’s birthday, and it was arguably everyone’s favorite thing; sweet but not mouth-puckeringly so, very vanilla but not overdone, and the frosting – a white chocolate buttercream – enhanced the cake rather than working against it. I’m not a frosting person, and this is one of two vanilla cakes I can say I ate all the frosting on, because it seemed to meld itself perfectly to the flavors of the cake inside (the other vanilla cake I feel this way about is the Momofuku Confetti Cake, in case you’re wondering.) If you’re not a white chocolate person, neither am I, but you wouldn’t necessarily detect it in this frosting: they’re correct in the book when they say it serves to deepen the vanilla flavor overall.

It could be the buttermilk in here that makes it magical. I have a known weakness for buttermilk-based cakes, because in my opinion, they surpass other cakes in terms of tenderness, and the tang of the buttermilk seems to mellow out the sweetness. It keeps things from going the instant cake mix route, where your teeth hurt and everything tastes slightly fake. It’s just a solidly awesome vanilla cake, friends: I can’t go on or I really will go on forever about it, but if you have the time and the patience, I highly recommend this cake to you for birthdays or any sort of party whatsoever. It starts out white (obviously, “Whiteout Cake”; I dyed it pale pink at the Wee’s request, so you have a blank slate to do what you want in terms of color. I’ll probably find a reason to make it this winter when it snows, because I want to see it in its natural state. 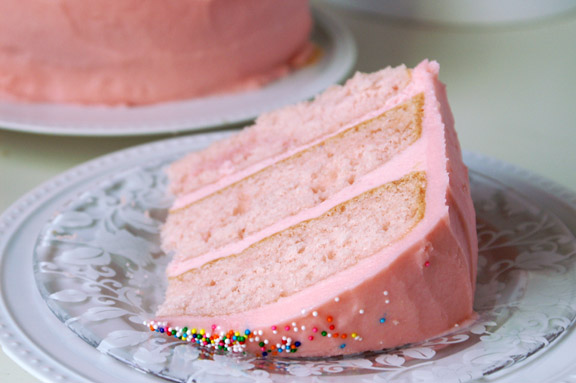 Biggest thing I can tell you here: follow the instructions. Don’t shortcut. Baked recipes do not like it when you do that, so give the cake your attention and it will be wonderful. The frosting may scare you: make it ahead of time, because when I made it, it was quite soft and needed to firm up a bit. In a pinch, you could probably add more confectioners’ sugar, but I do feel that staying true to the measurements here would be your best bet. It’ll firm up in a few hours; keep checking on it and when it’s ready, frost that cake and stick it right back in the refrigerator. It will be massive, so make plenty of room for it, and keep it there until it’s time to party.

Barely adapted (I adjusted, in a very minor way, a few things) from Baked: New Frontiers in Baking by Matt Lewis and Renato Poliafito. They should still get full-on credit for this cake, and I don’t typically make things without messing with them first, but this one needs no screwing around. Because it is not screwing around.

Note: there’s a good chance this will be the only time you’ll ever seem me being okay with 3 sticks of butter in the frosting. Go with it.

Preheat the oven to 325˚F and butter three 8-inch cake pans. Line the bottoms with parchment paper, and butter the parchment on top (the first butter layer keeps your parchment in place.). dust with flour, knocking out any excess.

In a large bowl, whisk together the cake flour, ap flour, baking powder, baking soda, and salt until evenly distributed. Set aside.

In the bowl of a stand mixer fitted with the paddle attachment, beat the butter and shortening together on medium speed until fluffy, 3-4 minutes. Scrape down the bowl with a rubber spatula. Add sugar and vanilla and beat until thoroughly incorporated, about 5 minutes, scraping down the bowl again. Add the whole egg, and mix on medium just until combined.

With the mixer on low, alternate adding in the ice water in two parts and the flour in three, beginning with the flour. Scrape down the bowl as needed between incorporation. After last flour addition is added, mix until everything is homogenous. Remove the bowl from the stand.

In a medium bowl using a handheld electric mixer, beat the eg whites and cream of tartar together until soft peaks form. Add a scoop of the egg whites into the batter (about a half cup) and fold in gently to lighten. Once incorporated, add the remaining whites and fold gently until everything is even. This is a heavy batter, so it’s going to take a while; be patient and don’t rush things. Check for streaks as you go; it’ll give your brain something to do, like Where’s Waldo with egg whites.

Divide the batter evenly into your pans: I do this by using either my ice cream scoop or a cup measure and taking turns with each pan until all the batter is in. Smooth the tops. Bake for 30-35 minutes, checking at the 25-minute mark for doneness and rotating pans as needed. Remove once a toothpick inserted in the center of each cake comes out cleanly. Transfer the cakes to a wire rack to cool for around 30 minutes, then invert them onto the rack, removing the pans and peeling off the parchment from the bottom. Let cool completely before assembling.

In a heatproof bowl set over barely simmering water, melt the white chocolate, stirring occasionally. Set aside to cool (if it gets too cool on you, simply heat it back up slowly as you did the first time.)

In a large heavy-bottomed saucepan, whisk the sugar and flour together. Add the milk and cream and cook over medium heat, whisking regularly, until the mixture has come to a boil and thickened, 20-23 minutes. Be careful on this step, and don’t walk away: milk and cream love to burn, so keep a close eye.

Transfer the mixture to the bowl of a stand mixer fitted with the paddle attachment. Beat on high speed until cool: this takes a good amount of time, also, and don’t rush things here either. If this part is too warm, everything else will be to warm, and your frosting will need longer to set up in the fridge. Once it has cooled, dial down the mixer to low speed and add the butter cubes, mixing until incorporated. Increase speed to medium and continue to beat until frosting looks light and fluffy.

Add the vanilla and white chocolate and continue mixing until combined. If the frosting seems too soft, don’t say I didn’t warn you. Your best bet to get some chill time in quickly is to transfer the frosting into a shallow baking dish and cover tightly to refrigerate. This spreads out the frosting and allows the cold to get into it easily, versus putting it in a deep bowl. I had this happen with mine: the perimeter will set up, but the middle will stay gooey. I had lots of time, but if you’re rushed, do it my way.

This one is easy, and it’s exactly how it looks. I tear 4 rectangles of parchment paper off to make a square under the first layer’s edges: that way, you can set it on your cake stand or plate, be utterly messy with the side frosting, and not have much clean-up. You simply pull away the parchment rectangles and it looks like you’re a pro. So set your first layer on top of those parchment rectangles, trimming the top if you want it perfectly even. I don’t always mess with this, I’ll be honest, but I’m the Queen of The Slightly Tippy Cake. Spread as much frosting as you like on this layer (you’ll have plenty, but don’t go crazy with it) and then add your second layer. Repeat, then frost the entire cake. If your frosting starts to warm up or get too soft, place it all back in the fridge for 15 minutes or so to firm back up. Decorate as you see fit.

Once your cake is completed, I suggest storing this in a cake saver in the fridge until close to serving time. Take it out maybe 30 minutes prior to cutting, unless it’s 100 degrees out or massively humid, in which case you may want to just wait until it’s go time. Store, always, in the refrigerator.