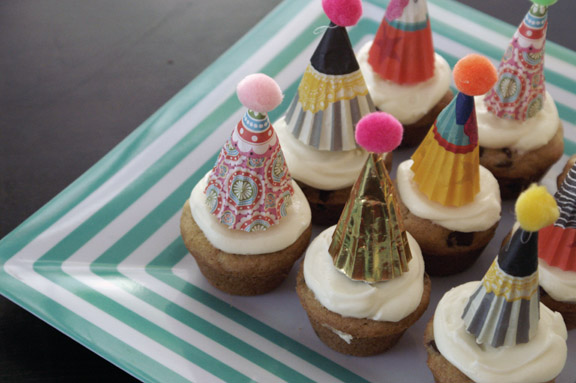 So, let’s talk hats for baked goods. You saw them at the Wee One’s birthday this year, and everyone seemed to really enjoy them. I liked them too; not only for how cute they were, but how easy they were to construct. Lots of us have storage bins filled with decorative cupcake holders: remember that one New Year’s Eve party that you just had to have glitter holders? Or that baby shower you threw? Or the adorable holders you found and you just knew they’d be great in photos? Those cupcake holders. And those are basically all you need. 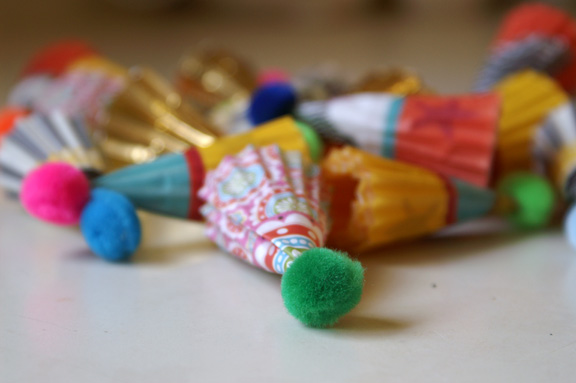 It goes fast, I promise, and you only have to make enough for the amount of cupcakes or cookie cups you’re having at your party. If you just want a single one to top a big cake, then it’ll take you 10 seconds. They work well with any frosting, and they maintain their integrity without bleeding or getting soggy. I like to let the frosting hang out a bit on the cupcake to form that slight crust on top, because the hats sit better and stay put. 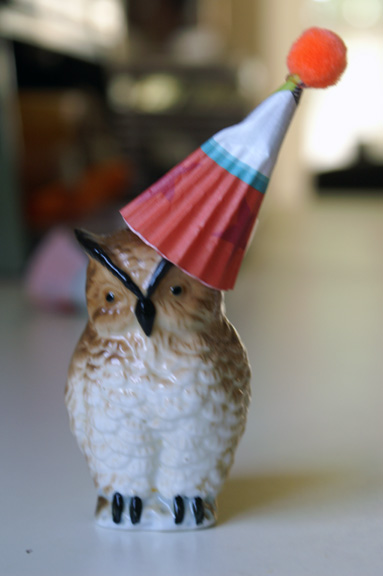 If you have extra hats, here’s a practical use for them. And who hasn’t had the urge to be-hat an owl salt shaker, I ask you.

Speaking of frosting, I feel guilty when I do posts like this but don’t have a recipe for you, so I’m giving you a superb (and simple) cream cheese frosting which topped the mini deep dish chocolate chip cookies at the party. Frosting cookies with cake frosting? Why not! And before you argue that chocolate chip cookies need no frosting, you’re correct; they don’t need it. But they like it, and you’ll like it too. Cream cheese frosting works really well with chocolate chip cookies, because it doesn’t over-sweeten them like some frostings would. Mr. Table put it best when he said that “it’s like having a cookie with a glass of milk, except the milk is on the cookie.” 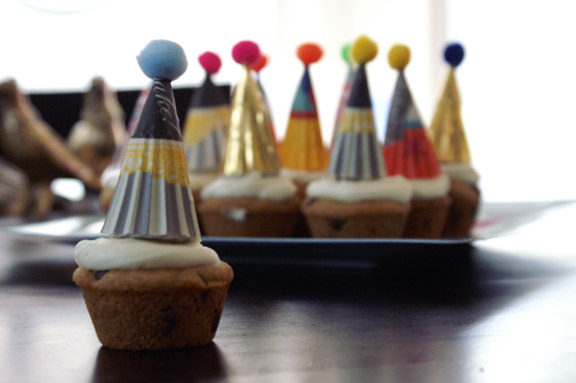 You have the recipe for the mini cookie cups; you’ve had that forever. Here’s the cream cheese frosting I used. Make it right before you use it (I think it works best this way), or make it ahead and store it in the fridge; just leave it out at room temp for a little bit to loosen up before frosting your cookies. 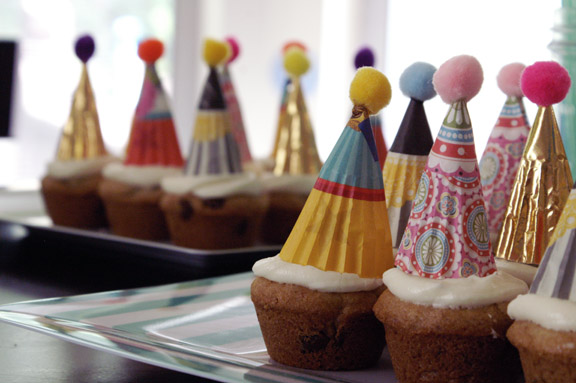 Recipe is my own, although given how simple this is, it’s not hard to imagine it being so different from some others out there. I add more cream cheese than I’ve seen in most recipes, because I’m always disappointed by cream cheese frostings that just taste vaguely of cream cheese and mostly of butter; I promise you, this one is not at all that.

Notes: You could absolutely use reduced fat cream cheese for this, if it makes you feel better, but please don’t use fat-free. If the look you’re going for is as white as possible, you can substitute imitation clear vanilla extract for the pure vanilla extract, but know there will be a very slightly different flavor imparted.

Add the confectioners’ sugar, 1/2 cup at a time, beating after each addition until incorporated and scraping the bowl down as needed. Stop when your frosting reaches the consistency you want.

Makes enough for one batch of the mini deep dish chocolate chip cookies, or frosts 24 cupcakes in a reasonable manner. This would be a delightful alternative to the ganache on my chocolate chip cupcakes, or you could go completely off your rocker and layer the ganache and the frosting together. If you’re wanting huge frosting tops on things, by the way, make a double batch.