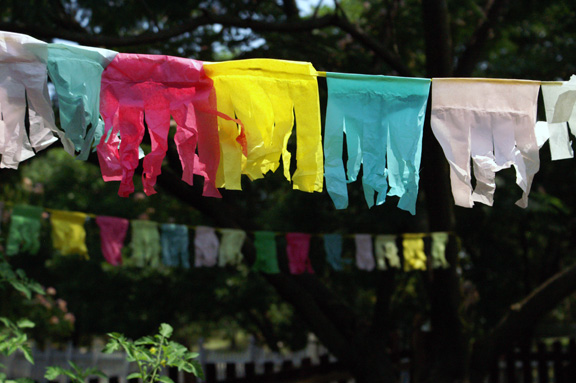 So you’d like to know how to make a fringe garland like the Wee One had at her third birthday? Of course you do; we can lie to ourselves and say that they’re just for kids, but deep down inside, we all want this garland for our own birthday parties. It’s Autumn (officially; I called it), which means the onslaught of all sorts of holidays, all of which you could use this garland for. Best part? Little to no actual talent required (are you allowed to operate scissors? you’re golden) and it comes together very easily. It’s inexpensive – or possibly free – provided you’re the type that scurries away unripped tissue from gifts every year because it looks to pretty to just toss away and that you are also in possession of basic craft supplies. I’m fairly certain there’s a strong correlation between those two things, anyway, so away we go: here’s how to make a fringe garland for parties. 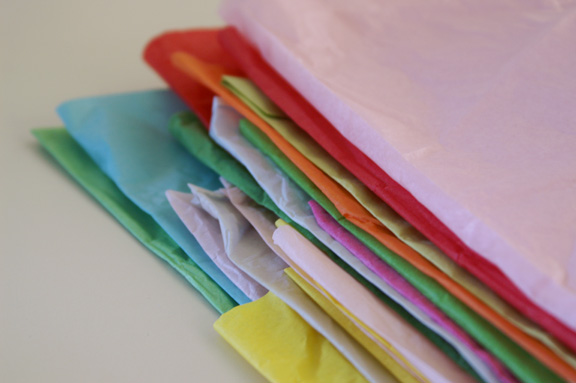 Step 1 – Lay out all your tissue paper opened, in a single layer, on your work surface. Smooth as needed to flatten any wrinkles or folds. Fold each tissue rectangle in half, matching the longest sides together (in other words, you’re going to get the most amount of squares out of it) and set aside. Repeat with the rest of the tissue. Keep in mind that all tissue is not created exactly equal, so your lengths may very slightly; this is okay, mine did two. You won’t see it once it’s crinkled, and a little variation is nice. 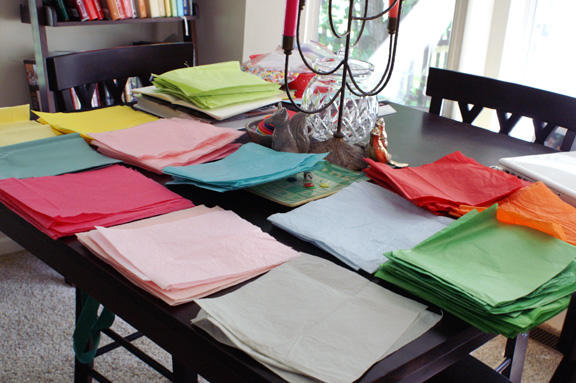 Step 2 – Cut each tissue length into segments so the creased edge is at the top of each one. The width, again, doesn’t need to be meticulously measured: mine were anywhere from 6-8 inches in length, and the variation added to the fun. Unlike the pennant garland from last year, there’s no need to be exact. Believe me, it takes much less time doing it freehand, so fight the urge to measure. Lay your tissue out on a work surface, stacked by color. 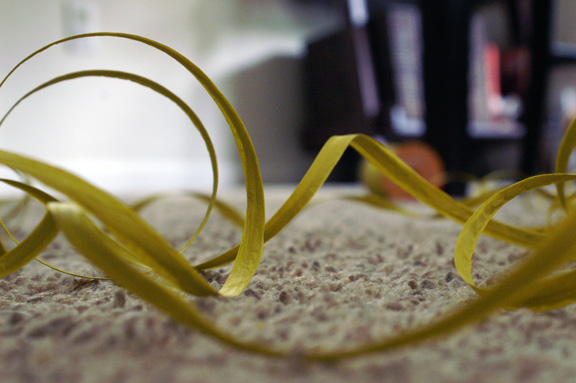 Step 3 – Cut a length of raffia equal to the ideal length of your garland and add a few feet on each side for tying off. If you cut it too short, this is okay! Raffia can be extended as needed by tying more on to each end, so no need to precisely measure anything; just have a good idea of how long you need it. 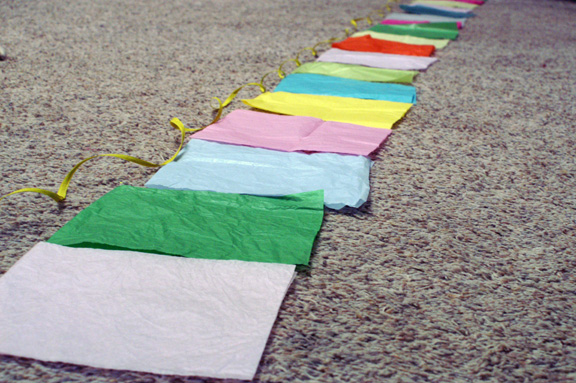 Step 4 – Lay the raffia down on the floor (your easiest workspace at this point) as straight as you can; you can wind it around into different rooms if you need to, just leave enough of an edge to easily get your tissue strung on. Lay your tissue squares down in front of it, folded end towards the raffia. Again, fight the urge to have a specific color pattern here: we simply took a few of each color, laid them out at different points on the raffia, then surrounded them with other colors that looked nice, and so on, until our garland was filled. This alleviates having to have exactly the same amount of each color. 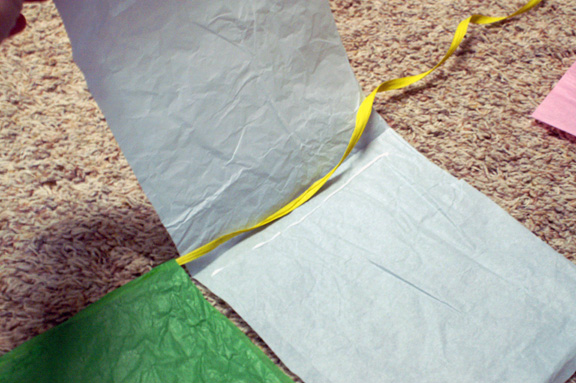 Step 5 – Time to put this together. Begin by opening each tissue up and lining your raffia string up near the top fold (it’s curly, so do your best here.) 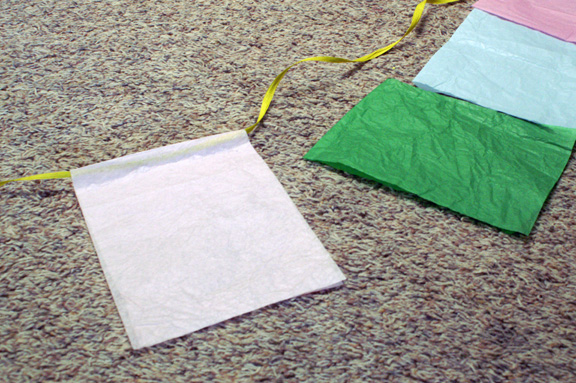 Step 6 – Grab your glue and, working one at a time, draw a thin line of glue on the tissue paper, an inch or two away from the top; you want your tissue movable (think curtains) on the raffia so you can adjust as needed, so keep the raffia away from the glue. Fold back over and press gently to stick the two sides of tissue together. 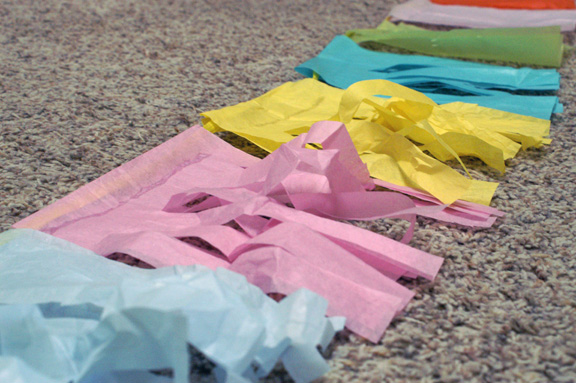 Step 7 – Once all your tissue squares are glued, grab your scissors and cut each one vertically into fringe, with strips approximately 1-1 1/2 inches in width. Eye it up as you go: you don’t want to run out of room, so cut accordingly to make even strips. After your fringe is made, go back through and gently crinkle up each tissue with your hands, using the same movement as you would if you were trying to dry your hair with a towel. That’s the exact motion, friends.

Step 8 – Hang that garland up somewhere: you’ll be overcome with instant festivity. This is indoor/outdoor appropriate, provided it’s not raining. Because tissue fades quickly, it’s best to put the outdoor ones up the morning of your party to protect them from the glare of the sun (or overnight/morning dew, which spells instant death to tissue.)

So there you have it: completely easy, and it doesn’t take much time at all. Spoiler alert: I’m almost positive I’ll make one for my birthday, Halloween, and also Thanksgiving. Just a guess, there, but it was so fun to make that I can’t think of a reason not to do it again.

More tutorials on the way! I still need to show you how to make the cookie/cupcake party hats, as well as how we made our games, prizes, and prize board for the Wee One’s party. See you soon! It’s tutorial week, I think. 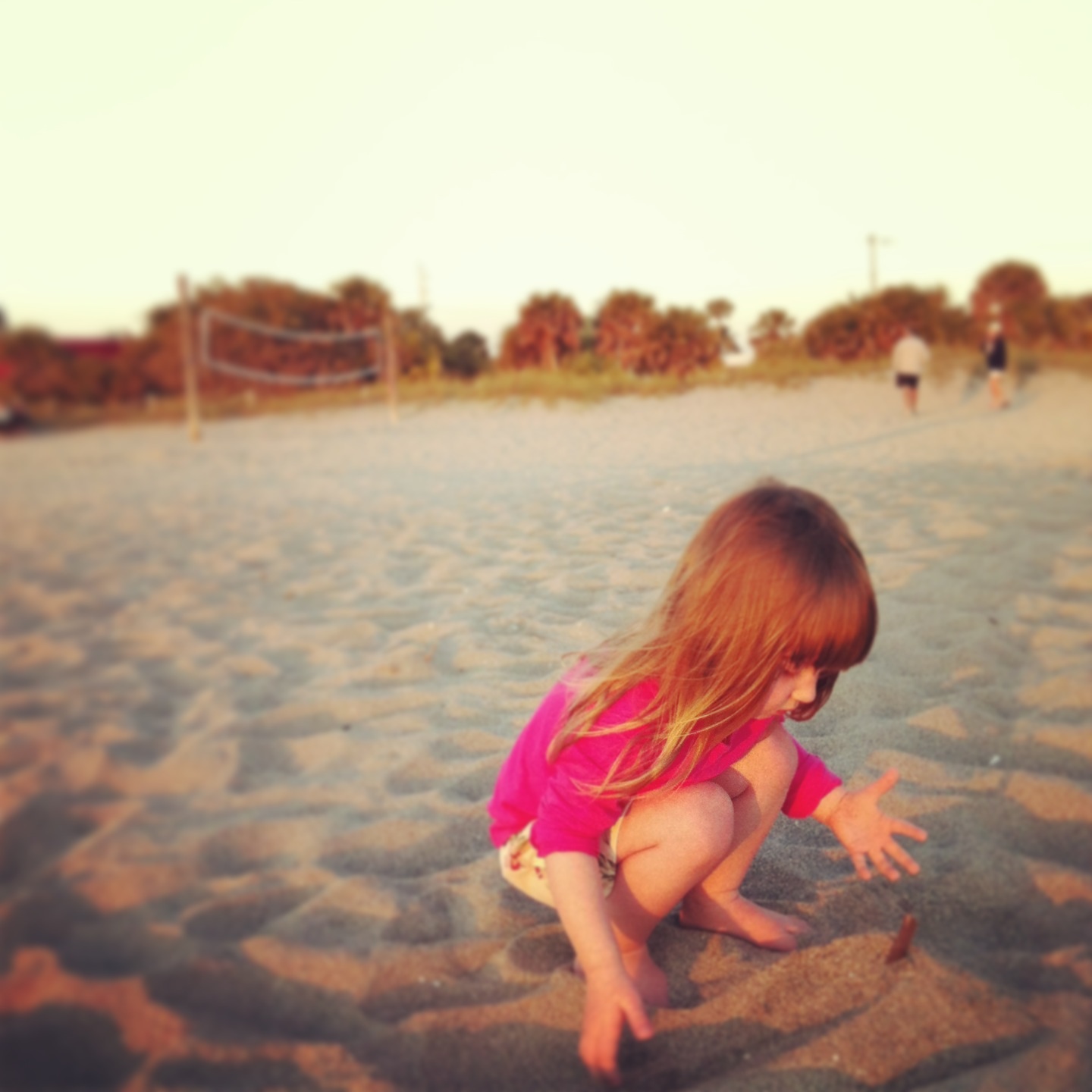