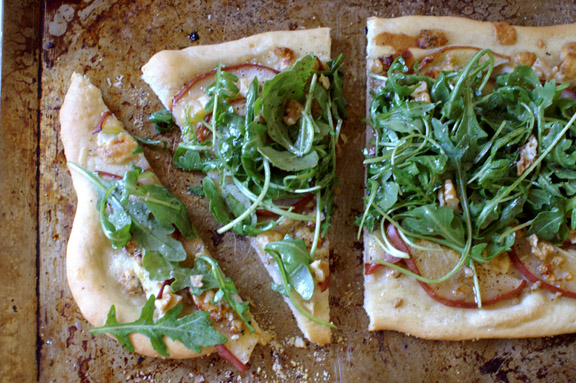 I realize Autumn doesn’t technically occur until later this month, but it’s September. To me, fall has arrived in a little bit of a way; not totally pumpkins yet, but apples and pears for sure. So too has Rosh Hashanah arrived, and in my attempt to learn more about Jewish food and holidays this year, I tried to do a few things for the celebration. Should a non-Jewish person ever try to craft new recipes for a people steeped in centuries of history and tradition? Probably not. So I’m learning, but there’s bound to be a few missteps.

Such is the case with a challah I tried to make earlier this week. I stuffed with apple pie filling, baked it, and although it was delicious hot from the oven, it lacked something – many somethings – once cooled. I wasn’t happy with it, although the challah bread recipe itself is a solid one, and has become the only one I’ll make. Someday it will be filled with something and will turn out delicious, but that won’t happen this week. 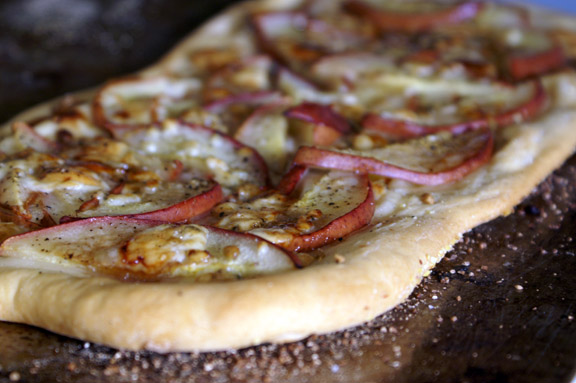 My other idea for Rosh Hashanah? Pizza. Because I know at least one person who is a self-described pizza freak, so I thought I would make this for her. It’s my ode to the eating of new fruits during Rosh Hashanah: once which have just come into season but have yet to be eaten. This pizza is made with red pears, which have very recently appeared in stores and are perfect right now, and pomegranate. You don’t see pomegranate in here? Good observation: because evidently it’s so early in the season that I can’t find a decent pomegranate anywhere. Instead, I made a pomegranate vinaigrette from reduced pomegranate juice, which is a dressing I use for fall salads regularly; it highlights the flavors of fall fruits and vegetables quite nicely, and works over virtually any green you throw it on.

What you have here is a pizza with a bit of salad on top, which works wonderfully for a family meal or sliced up for guests as an appetizer. Look familiar? It should; I made a salad-topped pizza this past winter. This one pairs up those brand-new red pears with creamy gorgonzola and tops it off with arugula and some toasted walnuts, all slicked up with the pomegranate dressing. I’m including pomegranate arils in the recipe as well, because were I to have seen pomegranates in the markets, I would have thrown some over top as a garnish; I encourage you to do so here, if you can find them where you are.

Remember me saying that I’m not sure a non-Jewish person should be crafting recipes like this? Here’s why. After I made this pizza, it occurred to me that there’s some rule about dairy, sometimes, if not all the time, with holidays. There’s gorgonzola in this pizza. Which is made, yes, with dairy. So someone tell me; is that okay? I didn’t see anything in my research about there being restrictions on Rosh Hashanah, but maybe whoever wrote those guidelines assumed a baseline of knowledge.

Also, and this should be chalked up to sheer forgetfulness, because I know this: can ovens be turned on during the holiday? I know there’s a reason why most food is prepared ahead of time (other than everyone just being very organized), and I have read that it’s okay to “put fire to” something so you can turn on gas ovens, but I’m unsure of the exact rules regarding cooking the on actual holiday days. Which would be critical to making, yes, pizza. 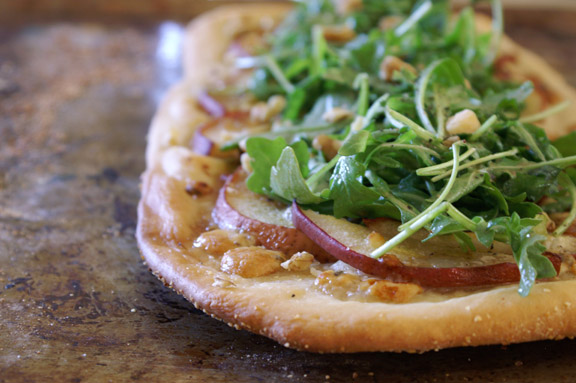 So this could be a complete non-Rosh Hashanah recipe, but even if it is, it’s a great all-the-other-days recipe, for sure. I love this flavor combination in the fall, when the pears are perfect and the air starts to take on that crisp fall smell. I was especially happy with the way this pizza turned out thanks to Faygie over at Life Tastes Good (my aforementioned pizza freak), because I finally tried her recipe for pizza dough. Without a doubt, it’s the best dough I’ve ever made myself, and I didn’t even use part semolina like the original recipe calls for. I meant to, but I kept forgetting to purchase semolina, but I’m here to tell you that the all-flour version is terrific; so, so easy to put together and roll out that I’m renouncing any and all use of store-bought dough. If you’ve found a great one to use, wonderful: by no means do you need to switch on my account, but trust me when I say that if you want to make one at home, this is the one to make. It’s delicious and worth the few minutes of effort. I made it a little easier by making it a stand mixer, so the effort I speak of? Even less.

Happy Rosh Hashanah, to those of you who celebrate it: is there a better way to say that? I’m not sure, but if anyone wants to enlighten me, I’d be grateful. I like to learn, and I’m never offended when someone corrects me. Unless, of course, you’re mean about it, which makes me cry and feel sad inside. Don’t do that.

Pizza made from my imagination and my love for these flavors together, with a marvelous pizza dough which is adapted slightly from Faygie’s recipe for her favorite pizza dough. I’m trying it with semolina next.

for the pomegranate vinaigrette:

*you can buy pomegranate molasses; I just can’t ever find it when I need it. If you have the same problem, you can easily make it. Take 4 cups of pomegranate juice and add it to a medium saucepan with 1/2 cup granulated sugar and the juice of 2 lemons over medium heat. Let it come to a simmer, then reduce heat to medium-low and let simmer, keeping an eye on it, for about 1 hour, until syrupy and very much like molasses (keeping in mind it gets more syrupy when cooled, so don’t let it go too far.) You’ll have a little left over, which you can use for another batch of this vinaigrette or to experiment with.

Add olive oil, yeast, sugar, honey, and water to the bowl of a stand mixer. Stir and let sit until foamy, about 5 minutes. Whisk in the olive oil and salt. Fit the paddle attachment to the mixer, add in 2 cups of flour, and paddle on low until dough begins to form, adding more flour to the bowl as needed (I got to 2 1/4 cups total.) Once a rough dough has formed and has begun to pull away from the bowl, remove paddle attachment and replace with the dough hook attachment. Mix on medium speed until dough is smooth, slightly tacky to the touch, and cleans the bowl, about 5 minutes.

Grease a large bowl with olive oil. Remove the dough from the bowl of the mixer, form it into a ball, and roll it around in the oiled bowl until it is completely covered. Find a warm spot in your kitchen and allow the dough to proof 2 hours under a clean towel.

Once proofed, it is either ready to use or can be stored overnight in a plastic bag or sealed container. I had to punch mine down once when I left it overnight, which was a few hours after I had placed it in the refrigerator; after that pummeling, it stayed put. If you do refrigerate overnight, let it sit out at room temperature for about an hour or so before using it to allow it to get back up to temperature.

In a medium bowl, whisk together the pomegranate molasses, maple syrup, honey, red wine vinegar, and Dijon mustard until blended. Slowly stream in the olive oil, whisking as you go, until emulsified. Season with sea salt and fresh ground black pepper. Set aside.

Preheat oven to 450˚F. Set out two half sheet pans and sprinkle with cornmeal.

Once your dough has proofed (or, if you refrigerated, come to room temperature), divide your dough into two equal sections and roll out each one into a rough rectangle. For reference, your rectangles should be the length of the long side of the half sheet pan you’ll be baking it on, and half the width of that same sheet pan; around 18 inches long and 7 inches wide.

Place one dough on each pan and bake in the lower 1/3 of the oven (one per rack) for 3-4 minutes, until bubbly. Remove and set on trivets (hot pads, whatever you call them) and remember the pans are hot as you assemble your pizzas.

Divide your pear slices in half and scatter your pear slices over the top of your 2 crusts, leaving a 1/2-inch border, and covering the crust as best you can. Divide and scatter the gorgonzola evenly over top the pear slices. Drizzle a little pomegranate vinaigrette over top, season with salt and pepper, and pop them back in the oven to bake until golden and bubbly, around 16-18 minutes, rotating halfway through.

In the meantime, add the baby arugula to a large bowl and toss with a few spoonfuls of the pomegranate vinaigrette.

Once the pizzas are done, remove them from the oven and allow to cool for a few minutes, just until they’ve stopped popping and have calmed down a bit on top. Divide the arugula salad in half, and add each half to one of the pizzas, forming a little arugula line down the center of the pizza rectangle. Top with toasted walnuts and, if you have them, the pomegranate seeds. Slice with a pizza cutter (you’ll be surprised how nicely the salad slices right along with the pizza itself) into 8 slices per rectangle, and serve.