Two recipes! I thought about throwing the slow roasted tomatoes into a separate post, but I didn’t want to drag things out too much; you already have a separate post for the ciabatta part of this anyway, if you’re interested in making it yourself.

I will not make you do that; this is more about the sandwich and the filling than it is the bread, so I’m not going to beat you over the head and tell you that you need to spend what basically amounts to a week (if you don’t have a sourdough starter already going) to make the bread part of this recipe. I spent too long during my Fear of Yeast years shying away from recipes involving bread-making. Do you have a favorite ciabatta? Great. go get some and I’m betting it will be perfectly lovely for this.

This is the Panera Bread copycat I was telling you about: their mediterranean egg sandwich. If you have had it, you know it’s fantastic. In fact, this post could easily turn into one about my deep and abiding love for Panera; that’s how much I adore them. It may not be very foodie-chic of me to profess love for a chain, but I’m not going to fake it and act like I don’t.

Did you know Panera is from St. Louis? It is, thereby making it a local eatery in my eyes. In fact, my fingers are having difficulty typing “Panera” repeatedly, because if you’ve lived here your whole life, you don’t call it that; you call it Saint Louis Bread Company, or “Bread Co” for short. Because it’s ours, thank you. 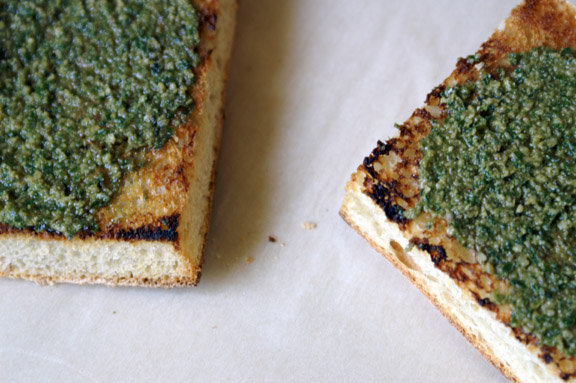 My life has always included frequent trips to Panera, so it’s a sentimental favorite for me. There was one down the street from my house growing up, and we were a family way more likely to grab that for dinner than other fast food options. Lest my mother read this, I’m not implying that we lived solely on fast food: she cooked regularly. However, she was a single working mother with two children, which means yes, sometimes, dinner involved the picking up of food. I still remember back then that the You Pick Two (incidentally, I like to think Panera invented the YPT meal option, and I don’t want to hear if they didn’t. fingers in ears.) was $4.75, which was quite the deal. It was a largely popular lunch spot of ours during high school, I grabbed many a fast meal there during college, and despite the plethora of food options near my old job, I always made a beeline for the Bread Co. I’ve watched their decor modernize from quaint cafe to modern bistro, their menu options rotate from standard to seasonal, and their approach to food become increasingly detail-oriented and fresh. Sure, they’ve had a few tiny fails along the way (anyone remember their short-lived pizza menu? No? It’s probably best), but they’ve managed to roll out successful pastas, side options, drinks, and an entire savory breakfast line while maintaining their signature offerings. What’s more, they’ve always been big on community involvement; I remember being fascinated as a child by their giving any leftover bread to food banks and shelters in the area at the end of the night. Quietly, they’ve made themselves a standout, i feel, among typical “fast casual” restaurants. I’m proud of them. 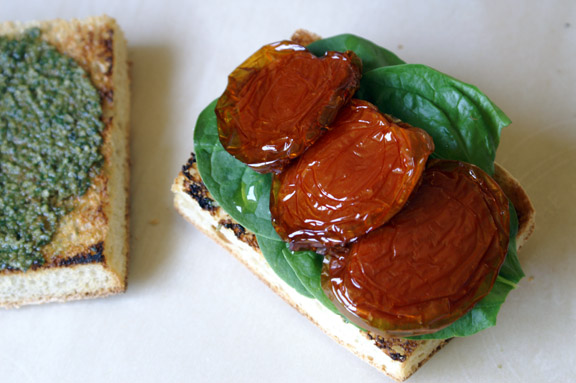 This turned into a Panera cheerfest, and although I didn’t mean it to, they do deserve it. I’ve been a huge fan of their breakfast sandwiches ever since they hit the menu, and this one is a fast favorite of mine. Don’t get me wrong; I’m eternally committed to the straightforward bacon, egg, and cheese ciabatta sandwich, but this mediterranean version was love at first bite. On their menu, it’s an egg white sandwich, and feel free to make it that way: there’s so much flavor in here, you most likely won’t even notice the difference. Yolks or no yolks, it’s going to be delicious, but do use the freshest farm eggs you can find, because you want to match the freshness in the rest of the sandwich. 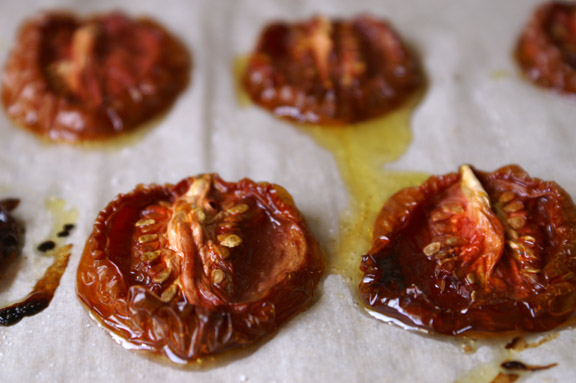 Did you see those roasted tomatoes up there? Those are incredible, and they truly deserve a blog post of their own. You can use them for this sandwich, toss them over pasta, as their juiciness basically makes a light sauce for you (take that, one-pan pasta!), or use them in a salad. Want a fast summery appetizer? Toast up some crostini and layer them with goat cheese or ricotta and a little pesto or balsamic. They’re gorgeous, and they taste like you slow-roasted a warm, sunny July evening. To summarize, these tomatoes would be good on anything. Don’t let the 12-hour cooking time deter you: the oven is set to super-low, so your house won’t warm up, and you can always do this overnight so they’re ready by the morning. Feel free to make a whole pan of  these; this recipe only uses a few, but the rest of them can be frozen for months and plucked out for future sauces and sides.

Another great thing about this is that it involves pesto; one of my favorite ways to use up the bumper crops of basil the gardeners among us may be experiencing by now. My garden bursts with it, and I’m missing it on vacation. It’s going to a good home right now in my absence, and I take comfort in that.

Roasted tomatoes adapted from a recipe found on Food In Jars. Sandwich adapted from what I imagine Panera Bread’s mediterranean egg white sandwich to consist of. Let’s say I’ve done “extensive research” on this, and leave it at that. Panera Bread (although I will always call you Bread Co), I love you.

for the roasted tomatoes:

for the breakfast sandwiches:

Before we begin, I should note that Panera actually makes this as a panini pressed sandwich. I do not have a panini maker, nor do I want one, because I don’t need another appliance running around here. These are perfectly respectable toasted as I make them, but if you want the “panini experience,” make them in your own panini maker or press them using a heated cast iron skillet and something equally heavy to press them down into it, flipping halfway through until both sides are toasted.

Wash and halve your tomatoes and place them insides-up on the prepared pan. Drizzle with a little olive oil, being sure to hit each one with it (don’t overdo it), and sprinkle with a little sea salt. Place in the oven and let slowly roast down for 10-12 hours, checking them at maybe the 9-hour point. My tomatoes were done at the 10-hour point, but my sheet pan wasn’t full. They will smell like sun-dried tomatoes and be flat but still juicy. Remove from oven and place on a rack to let cool to room temperature. Use some for the sandwiches, and place the remainder in the freezer for later use.

You should normally do this as you are reading the instructions, but if you didn’t, consider this the reminder. Eggs don’t stay hot forever, and neither does toast, so have everything ready to go on your counter prior to starting the eggs. Including slicing up your bread.

I hesitate to tell you how to do this, because everyone has their own way of doing an egg for an egg sandwich. For perfect looking round eggs, crack them into metal rings in a heated skillet and let cook until mostly firm, breaking the yolks halfway through. Remove the rings and flip over, allowing to cook to your desired amount of doneness. For these sandwiches, I break the yolk and let it cook because I don’t want the mess. Ordinarily, I love a liquid yolk, so you decide for yourself.

But I’ll stress this: make the eggs in the way you prefer: if you like them poached, poach them. Scramble them. Do whatever, it’s an egg. It will be delicious no matter what.

Now if you’re just making one or two sandwiches, great; probably you can use your toaster for this. If not, lightly butter the insides of the ciabatta slices and place them on the sheet pan. Scoot them into the oven for a few minutes until warmed.

Remove your bread from the oven and transfer to a cooling rack on your work station. Spread some of the basil pesto on each of the bread slices (all 12), then top 6 of those slices with some spinach. Top the spinach with three roasted tomato halves, then layer the egg over top, then throw the cheese over the egg. Season as you see fit.

Sandwich the 6 stacked halves with their matching bread and pesto tops and serve immediately.

Obviously there will be no leftovers to store, except for the tomatoes, if you chose to make a giant sheet pan of them. If you did, bravo! You’ll have some excellent tomatoes for sauce. Store them tightly sealed in airtight containers (jars work really well) in the freezer for up to 3 months. 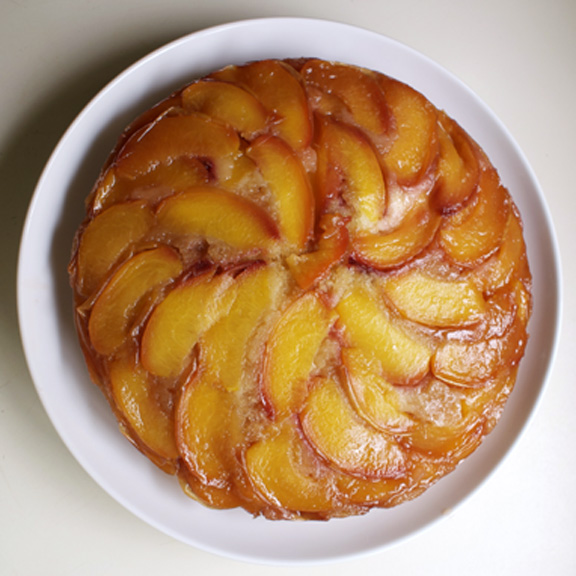