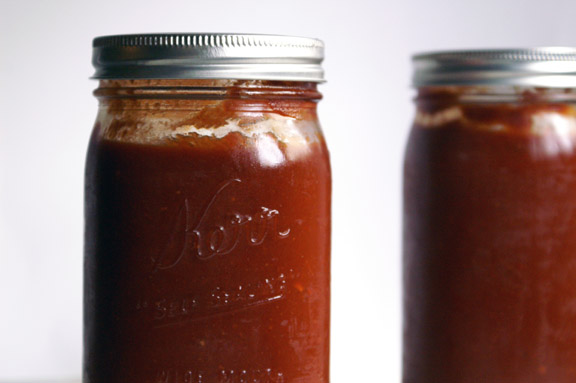 It occurred to me the other day that it is, once again, summer. It’s hot and humid here, my Arizona friends and relatives are posting about near-Hades-like temperatures in the Southwest (but it’s a dry heat!), and the rabbits in my yard have eaten through chicken wire approximately 39 times already trying to lay waste to my garden. Also, Mr. Table gave up trying to fix the old barbecue grill (it was time) and bought a shiny new charcoal one. All of this means one thing.

Now friends, I have never made barbecue sauce from scratch before, for several reasons. One: I rarely eat meat. I’ve said before that I have nothing against meat, but when you’re running around with a toddler all day, it’s easier to throw vegetables, fruit, or a few eggs else together rather than handle and cook something meat-like. I don’t miss it, either, so going out of the way for it seems slightly ridiculous most days. Two: I can’t grill anything effectively. I would say it’s not for lack of trying, but it really is for lack of trying. I’m going to work on learning some things about the grill this summer, but Mr. Table had a gas grill before, and I’m not super into either the flavor or accidentally blowing up the house. I feel more confident with charcoal, so I plan to give it a go this year. Finally: I am very specific in terms of barbecue sauce flavor. It can’t be super sweet, almost gelatinously thick brown-sugar laden variety, but it can’t be the really mustardy sort either. I’m a tomato-based sauce girl, so I like things tangy, with a slight sweetness to balance it. I realize this is a regional thing, but I consider this type of sauce like this to be what classic American barbecue is all about.

Please forgive me, good people of Kansas City, the Carolinas, and everywhere else who has a differing opinion: I do not mean to ruffle your feathers. But I am from Saint Louis, and I grew up on Maull’s, and much to Mr. Table’s chagrin, it’s still the only one of the barbeque sauces I really enjoy.

Until now. Because now there’s this one, which I made myself from a recipe out of Andrew Carmellini’s American Flavor cookbook, which is very much like my childhood favorite, only completely amped up in terms of flavor layers. Andrew Carmellini is like the Saucemaster General as far as I’m concerned, but you know this already from last year, when I made his potato salad, slaw (a favorite in my household, and I should really fix that photo because I make it much prettier now) and greek dressing (sitting in my fridge right now, as a matter of fact). The man knows his flavors, and this sauce is no exception. The recipe is simple, as you caramelize some onions, throw them in all the other ingredients, and then simmer, simmer, simmer until your entire house smells like a cookout.

You can easily adjust the spice factor in this to suit your taste (I’m talking to you, who just skimmed the ingredients and found the 5 chipotles in adobo) if you’re concerned about heat. It’s pretty zippy with those chipotles in there, so dial it down by using only 1 or 2 versus the entire amount. If you’re still nervous, try using just the adobo sauce; I do that sometimes to get the chipotle flavor versus without all the heat. Beyond the chipotles, there’s nothing else in the sauce which is terribly spicy, so that’s what will determine how much of a kick your end result has. My adjustments were extremely minimal, because why mess with perfection. Or an Andrew Carmellini sauce. You know, I don’t talk about him enough because I don’t do tons of savory on the blog, but in terms of cookbooks, I do consider this one of my most favorites. If you take out all the Nigella books, it’s easily in my Top 5. He really is like, a master of flavor without being a prima donna about it, and I dig that. 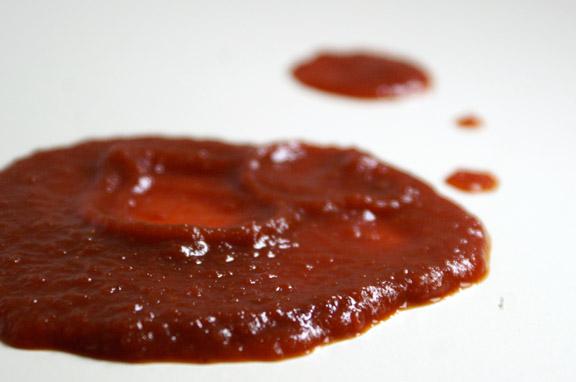 As I finished typing this, I happened upon a new post on sweet and spicy chipotle barbecue sauce Willow just did over at her blog, Will Cook for Friends. Ours are similar, but different enough for me to say that you have two pretty great options for barbecue sauce this year. Go check it out. Better yet, make both and hold a Sauce-Off for your friends some evening.

Adapted, but very minimally, from the recipe for Greco’s Barbecue Sauce from American Flavor by Andrew Carmellini. I love this book just as much as I love a prepositional phrase. Which is a lot.

**I’ll warn you again: 5 chipotle chiles pack a significant amount of heat. if you want a good kick with less heat, or want a more family friendly/I don’t want small children to cry sauce, scale the chipotles down to 1-2 versus 5. Want to control it more? Add a few tablespoons of the sauce, simmer, and if you feel like it needs more heat when it’s finished, add a wee bit more.

Heat the oil in a large saucepan over medium high heat. Add the onions to the pan and caramelize them for 10-15 minutes (use your eyes here), stirring occasionally so they caramelize evenly. Mine took closer to the 10 minutes, so watch them as you go to make sure you don’t scorch them.

In a large saucepot or dutch oven, stir together all the other ingredients except the lemon juice. Add the onions, and set your heat to medium high to bring to a boil. Once it begins to boil, reduce the heat to low and simmer until your mixture has reduced by about half, which should take an hour or so. By “or so,” I mean it’s more important to wait until the sauce has reduced than it is to watch the time, because you don’t want to rush it. Stir the sides and bottom of the pot occasionally to keep things from sticking.

Once it has reduced, pull it off the heat and use a stick blender to blend everything together. Take your time with this also, because you want everything to be completely smooth, and you have a lot to blend up in there. Once your sauce is thoroughly blended, stir in the lemon juice until combined into the sauce. Let cool in the pot for a little bit, then pour into big Mason jars.

This keeps for up to 2 weeks in the fridge, or up to 6 months in the freezer. Unless you’re using this daily or giving some away to friends (and ahem, this would make a lovely Father’s Day gift, right?), you’re going to need to freeze some, so plan accordingly with proper storage containers.