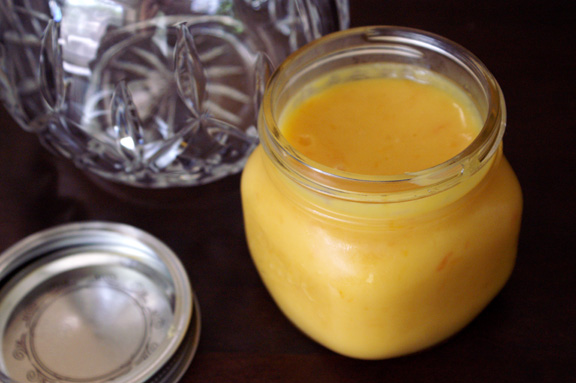 Really fast post, because while rambling endlessly about the wonders of angel cake last post, I suggested you could use your leftover yolks (a dozen!) in a curd. I was referring to this curd, because as luck would have it, it uses precisely twelve egg yolks; the same as you’ll have over from the angel cake recipe. It’s like they were made for each other.

Just look at them together. 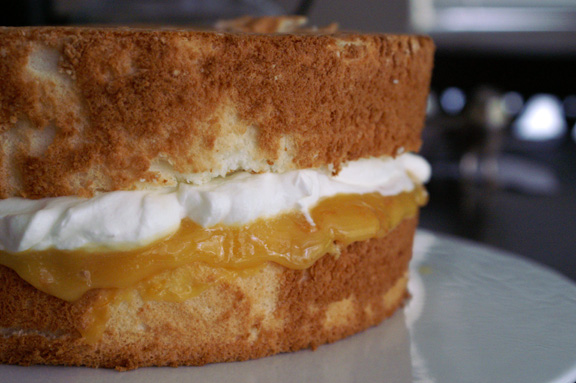 Truly, you could make any curd to go alongside an angel cake: its light fluffiness can take a yolky curd very well. Even better, finish it all off with some homemade whipped cream, and you have yourself a very easy, totally make-ahead summer dessert. This grapefruit version is exceptional, and a wee bit surprising: I didn’t know exactly what to expect from a grapefruit curd, but this was so much better than I imagined it would be. The grapefruit juice is tart enough to stand up to all the eggy-ness, but not so much that it’s overpowering. It toes the line very well, just like a lemon curd would do.

Your choice of grapefruit is key here: buy them in season, and remember that grapefruits range in color from very light orange-yellow to almost magenta. I used a very deep red grapefruit, and as you’ll see, it lightens up quite a bit. You’ll be using the zest as well, so look for grapefruits you like the outside of as well. 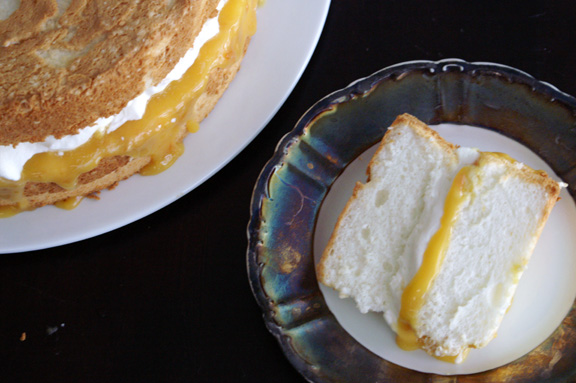 I’m mulling over a way to use in something else right now. I’m having a moment here where I feel like I make something, and then I have an idea based on what I made, and then it funnels itself into something else, and so on. It’s like a food circle of life over here, and it’s nice to not struggle with ideas like I typically do in that dead zone between February and May. More on that soon, but so far it’s manifesting itself into tons of inspiration and (I hope) some pretty great recipes for you. For now, you get the grapefruit curd, with a promise to do something fun with it.

Adapted from one of my best cookbook finds this year, Piece of Cake: Home Baking Made Simple by David Muniz and David Lesniak. I’m nicknaming them The WonderTwins and I super hope they don’t mind. I don’t think they’re twins, so you know.

In a medium saucepan, simmer the grapefruit juice until it has reduced to approximately 1 cup, stirring occasionally. Let cool to room temperature.

In a large heatproof bowl or double boiler, add the reduced grapefruit juice, egg yolks, sugar, and grapefruit zest (and the juice it is housed in) and whisk together until combined. Heat the mixture over a pan of barely simmering water, being sure that the bottom of the bowl does not touch the water. Add the butter cubes about 3 minutes into the heating process, whisking constantly until dissolved, and then continue to whisk constantly (less furious, more relaxed) until mixture has thickened to a custard consistency, about 15-20 minutes. Rely on visual cues and temperature more than time here, please: use time as a round estimate only, and trust what you see. What you’ll be looking for is a thick mixture that you know will thicken a bit more when refrigerated, and a thermometer which registers 170˚F. Do not let the mixture boil, or it will curdle.

When it’s ready, remove the curd from the heat and allow to cool down to room temperature. Strain it or don’t strain it (your choice: I almost never do, but use a fine mesh sieve if you want to) and transfer the curd to a jar with a lid. Cover tightly and refrigerate up to 1 week.