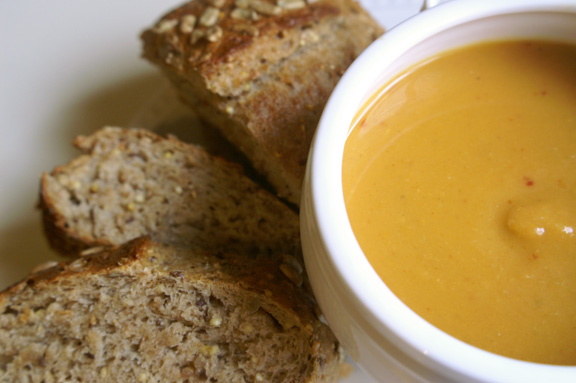 Out of nowhere, the temperature took a nosedive. I was lamenting the indian summer we were having, and poof: gone. Replaced with highs in the 50’s and a constant feeling that it’s going to rain. Too late for us to have any real fall leaves to peep, but better late than never, because it’s time for soup.

Soup is silly, just silly, to make when it’s 85˚ and sunny out. I can’t bring myself to do it. But dreary weather begs for it, so I went searching through my October 2011 Martha Stewart Living magazine for some inspiration. Since the pretzel shortbread snack bars were such an outrageous hit (6 batches, people…these things go everywhere) I knew there had to be more good food to be found. 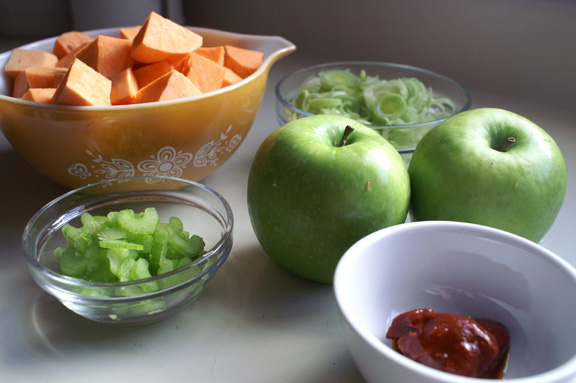 As usual, Ms. Stewart does not dissapoint: enter smoky sweet potato soup. Sandwiched in between recipes for sage popcorn (really? okay!) and three-cheese macaroni was my next potential “go-to” soup recipe. And those are the best sort, right? The kind you can do entirely from memory, from ingredients to creation. Even better, the kind you already have half the ingredients for sitting in your pantry. And, as luck would have it, I did.

Martha mentions this soup has a creamy texture without the addition of cream or butter of any sort. I was skeptical, but it’s true; the end result is a couldn’t-be-more-rich-and-creamy-if-it-tried soup, all from the vegetables. Sweet potatoes are so nice this time of year too, especially the organic ones. mine were so deep orange they were practically glowing. I made a few alterations (mainly, the addition of an extra apple to the mix) and I used vegetable stock rather than the chicken stock the original recipe called for. 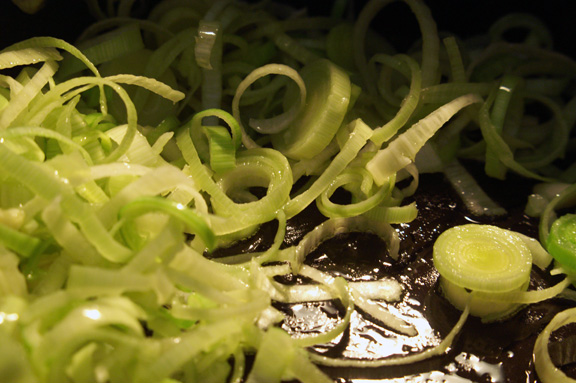 Make this, chunk up some grainy bread, snuggle up and enjoy. It will warm you to your toes. But be forewarned: the chipotle in here is the definition of “a little bit goes a long way,” believe me. This soup packs some heat, so don’t go overboard. You don’t add the chipotle chili until the end, so my suggestion is to maybe cut one in half and add it, blend, taste, and see how you feel about it. I ultimately added the entire chipotle chili, but everyone has a different tolerance for spice. Tread lightly, especially if making this for a group.

Smoky Sweet-Potato (+ Apple) Soup (the apple in the title is my addition; I think it deserves a little credit here.)

Heat oil in large pot over medium heat. Cook garlic and leek until soft and translucent, about 4 minutes. Add apples, celery, and ginger and cook for 3 minutes. Add sweet potatoes and stock and simmer until sweet potatoes are tender, about 15 minutes. Add chipotle chili (and remember what i said about this: add half if you’re at all concerned about the heat factor. after you blend it, taste it and add the other half if you feel like you want to.)

If you have an immersion blender, use it to blend your soup, being careful not to splatter all over the place. if you don’t have an immersion blender, working in batches, transfer mixture to a blender and puree until smooth, transferring soup to a large bowl as you work. (For safety, remove cap from hole in lid, and cover with a dish towel to prevent splattering.) Season with salt and pepper.

Serve with hot crusty bread, grilled sandwiches, or anything that warms your heart.