Shavuot, congratulations: you are the first Jewish holiday I am on time for! I was late for Purim and Passover, but you; you I managed to not be tardy for. I think it’s because you’re about dairy; all sorts of dairy, evidently, so it’s easy to both love you as a holiday and also find you easy to make food for. I can see why people look forward to celebrating you.

So it seems that there are two big things everyone makes for Shavuot, at least from what I’ve observed: cheesecake and blintz. I’m on board with either of those two things, but you should know I tried to do something different and subsequently ran out of time. This cheesecake makes up for this completely, because it is quite wonderful, and mostly perfect right now since our collective hearts are once again turning towards summer fruit. Blueberries are one of my favorites (tied for first place with nectarines), so it was only a matter of time before this happened. 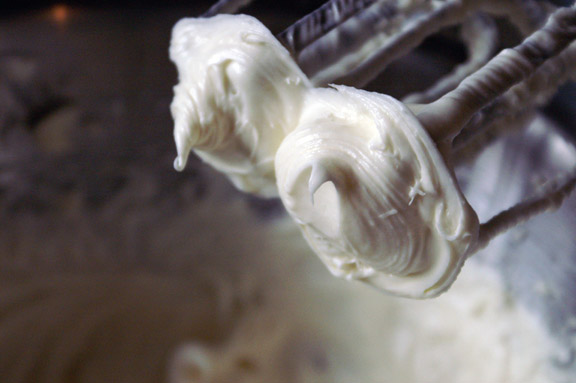 This was originally a recipe for blueberry cheesecake bars with a hazelnut crust. Now, hazelnuts impart a splendid flavor in desserts like this, but they require a good amount of work. First you toast, then you shimmy their little skins off with towels while trying to not burn yourself, and so on. Also, I prefer my hazelnuts paired with stronger flavors, like coffee or chocolate, and it seemed a little much for a cheesecake with fruit, so I switched them out in favor of macadamia nuts, which have a subtle flavor and are very similar in texture. No potential hand burns, either; they are easily found ready to go with no skin or shell.

Sometimes I mess with things so much it turns right back around to what the original thought was; such is the case with this dessert. Since cheesecake was such a big thing, I thought bars would be a nice take on the classic cheesecake, only to determine that I prefer the ratio of actual cake-to-crust over bar-to-crust; the bars simply had too much crust. The crust is lovely, but nut and graham crusts always need a good amount of topping to balance the flavor and texture out, at least in my opinion. Working this into a 9-inch Springform round rather than a 9 x 9 baking dish gives you the perfect filling-to-crust bite each time. Springform pans always seem to make everything look so spectacular from the sides, too; very regal, this little bar-turned-cake.

So this is a recipe for bars which, in my ridiculous hands, has turned itself into a cheesecake. A very good one, for sure: I love classic New York-style cheesecake (which reminds me, I need to make that and post it for you also), but this one is creamier, softer, and has a nice jiggle to it. The blueberries, of which there are many, stay suspended in the batter through the cooking time, which means you get a cheesecake which looks a little something like this inside: 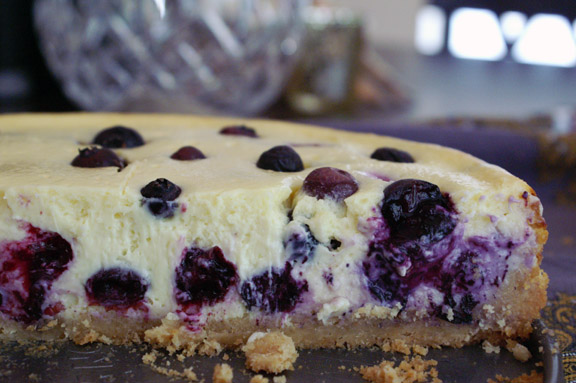 Yes, I know. And those blueberries magically manage to stay in their little pockets and fully cook themselves, so you get all the flavor of a blueberry sauce with none of the extra work. Please use fresh blueberries for this: there’s no way you could swirl frozen ones into this without making a serious mess. Cut carefully as well: do what you would do with brownies (when you want them to look nice) and wipe your knife with a clean, damp cloth each time you cut a piece: this eliminates the purple juice hopping from one slice to the next. 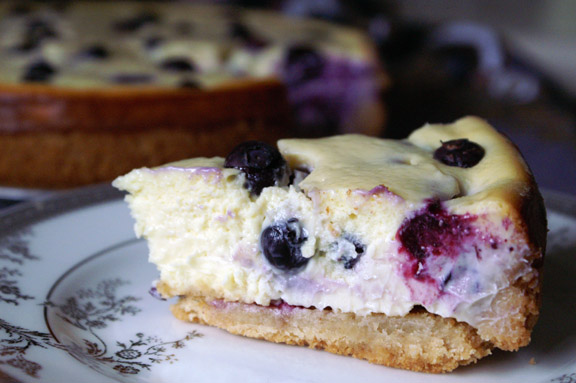 Not Jewish? Cool, neither am I; I just have a serious respect for Jewish traditions and how they tie so deeply in with food, and I’m attempting to gain some knowledge. Make this for Mother’s Day, if that’s a thing where you live. Moms love cheesecake, especially when you make it yourself. And it’s stuffed with blueberries and on top of macadamia nuts. Truth.

Adapted from Essentials of Baking: Recipes and Techniques for Successful Home Baking by Williams Sonoma. An actual essential in my library, as well; the title doesn’t lie. If you are a new baker that’s learning or just like a solid cookbook with some solid recipes to build from, this is a worthwhile investment.

*Dry-toasting nuts could not be easier, but it requires your full attention. Place them in your favorite skillet over medium-high heat, flipping constantly until you smell them and they start to turn golden. They may not look like they’re doing anything for the first few minutes, but I guarantee you the minute you look away or leave them to go do something, they’ll begin to burn. Just keep flipping, and they’ll be done before you know it. Have a plate ready so you can pour them out and let them cool independently of the skillet.

**use around 2 cups of blueberries to fold into your cheesecake batter. Fold them gently so that everything is even. Once you’ve poured the batter into your pan, lightly toss the other berries around over top; they’ll sink in a little bit but should stay suspended as mine do during your bake time. Aim them around the bumps you’ll see from the smothered blueberries in the batter.

Position a rack in the middle of the oven and preheat to 325˚F. Butter the bottom and sides of a 9-inch Springform pan.

In the bowl of a food processor, combine the flour, sugar, macadamia nuts, and salt and pulse a few times to grind the nuts and combine the mixture; your nuts should be integrated fully with no chunks visible. Add the butter cubes and pulse 10 times or so until the mixture begins to form large, coarse crumbs and looks like wet sand.

Press the crust mixture evenly into the bottom and maybe 1/2 inch up the sides of the prepared pan. Bake the crust until lightly golden with a dry, firm top, 18-20 minutes, checking at the 16-minute mark. Set aside to a wire rack while you make your filling.

In a large bowl using an electric mixer, beat the cream cheese and sugar together until blended and smooth, 3-4 minutes. Add the eggs one at a time, beating well after each addition and scraping the sides and bottom of the bowl as needed. After the last egg addition has been incorporated, scrape down the sides of the bowl again and beat a few more seconds to incorporate any pockets. With your mixer on low, add in the heavy cream, vanilla, and almond extract and stir until incorporated.

Using the rubber spatula, gently fold in around 2 cups of the fresh blueberries, being careful not to burst any while you are doing this. Once the blueberries are evenly distributed, pour the batter into the very center of the prepared crust, letting it work itself out to the edges on its own. Sprinkle as many of the remaining blueberries over top to decorate, and place in the oven.

Bake until center is set when you give the pan a gentle shake, about 35-45 minutes, checking at the 35-minute mark. Mine took closer to 45 minutes, but you don’t want to over-bake this, so watch yours carefully. Remove from the oven and transfer to a wire rack to cool down, around 2-3 hours.

Once cooled, place plastic wrap over the pan (not touching the top of the cheesecake) and place in the fridge to chill, at least 3 hours or overnight. You may see some condensation begin to form on the plastic wrap: to avoid any drips on my cheesecake, I just periodically replace the plastic wrap. It sounds like overkill, and certainly you do not have to do it, but I like a clean top which is free of drips.

To serve, use large, sharp knife and cut firmly down through the crust: it’s pretty sturdy down there, so you’re going to want to feel it give way before pulling out a piece. Keep a clean, damp kitchen towel nearby and clean your knife after each slice; It will keep the purple to a minimum and it’ll make your slices come out smoothly.

Stores tightly covered in the refrigerator for up to 3 days, and freezes for quite a while; up to 1 month, properly stored and protected, in your freezer.