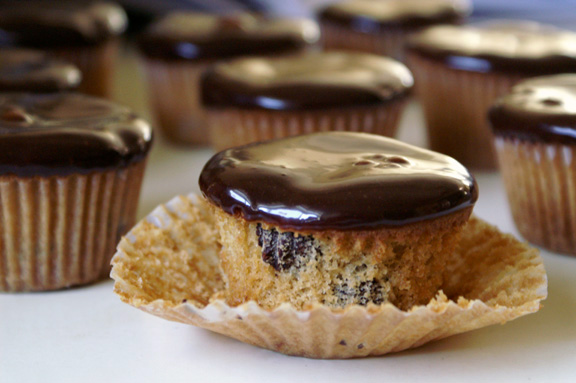 Two very exciting things happened at the end of April this year. 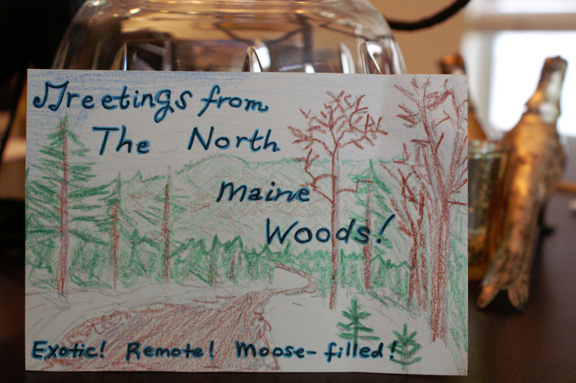 Emma from Of Agates and Madeleines hand-illustrated a postcard and sent it to me from the middle of the Maine woods, where she hangs out most days. This was part of a previous agreement we had made to send each other postcards from our various locations; my vacation site in Florida versus her work site at the tippy top of the States. I sent her two postcards (I couldn’t decide which exemplified my vacation destination more) but they were not hand-illustrated, attached to a little note, and cuddled into a hand-folded envelope, friends. Only Emma would do that, and this is why I love her. She’s my kind of absolutely nuts, and I like it. Thanks, Emma.

The other thing that happened? These cupcakes. 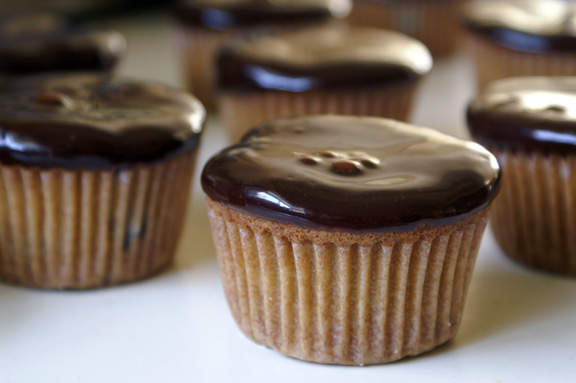 I bake things all the time. Food is a constant presence in my house, and yet, some things which come out of my kitchen hold my attention for much longer than they should. These cupcakes are a good example of that. They surprised me, and by now, almost no form of cake actually shocks me. I have learned what to expect from most things, as I should, because that comes with experience and time.

Wrong, people. I WAS WRONG.

These cupcakes taste just like classic chocolate chip cookies, only in bouncy cake format. With ganache on top. I know what you’re thinking: why add the ganache? A few reasons. Although the flavor is wonderful as/is, but the ganache adds a perfect finishing touch. It’s not a frosting, so it more or less just brings out the chocolate chippiness of the cupcake. Also, chocolate chips can be pesky in one regard: if they’re around any sort of moisture, they sometimes whiten around the edges. You know how muffin and cupcake tops tend to be a little less dry than their insides? That tiny bit of moisture messes with any chips showing at the top, causing them to look a little strange. The ganache blankets over this minor issue so you never have to worry about it. 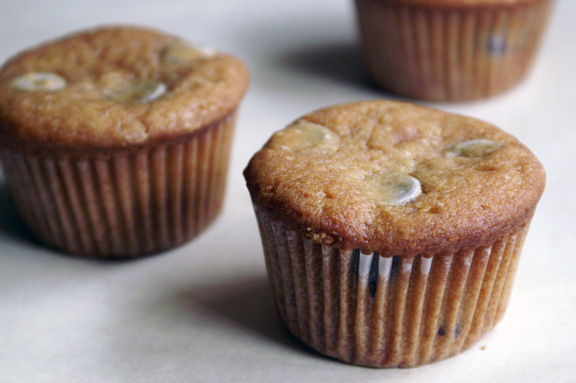 This is from the book I can’t seem to tear myself away from (sorry, Library), A Piece of Cake by the Outsider Tart guys and altered to mirror the flavors in my own recipe that I use for those mini deep dish chocolate chip cookies. If you like those (and I know many of you have tried them), I can say with confidence that you’ll love these. I had one issue – their ganache recipe. I made it – twice – and I could never seem to get it to thicken up enough to actually form a real ganache which would stay put at room temperature. Here it is on the right: 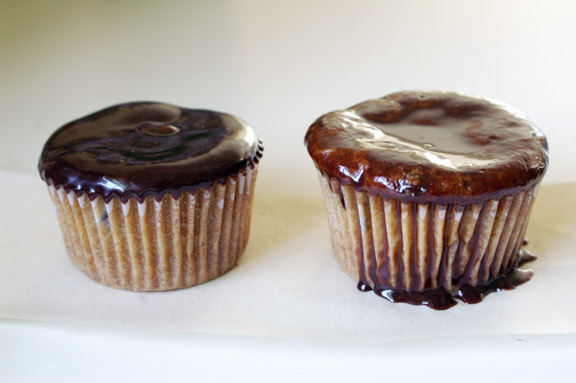 See? Far too runny. Refrigerating worked to firm it up, but i didn’t want to refrigerate the final product. Instead, as you see on the left, I made what is probably my most-used recipe from the Momofuku Milk Bar book; the fudge sauce. It’s a breeze to make, and as long as you put in the proper amount of whisk time, it turns out glossy and perfectly set every single time. There’s other sauces/ganaches that come close, but this ganache is spot-on: it goes on smoothly, doesn’t drip, and stays shiny for the lifetime of the baked good you just smothered with it. Not to knock the original ganache at all; it’s delicious, and although it proved a bit too drippy (at least when I made it), it makes a fantastic, saucy fudge when chilled. It stays creamy, so it’s a perfect homemade chocolate syrup.

If you need proof of the miraculous consistency of the ganache at room temperature, here it is. Look at that: stays exactly where it’s supposed to.

At some point, I had to throw some leftover cupcakes in the trash and pour dish soap on them, lest I risk actually eating myself silly. I’m used to baked goods around here, and can normally keep them at arm’s length, but these were an exception to my “everything in moderation” rule. And they refused to go bad; something about the ganache and the cupcake paper seals in the freshness on these for a lengthy amount of time. We made it to Day 4 and still felt they were incredible, but by then, we were hooked, so it could just be the addiction talking.

Don’t say I didn’t warn you.

Cupcakes adapted from A Piece of Cake: Home Baking Made Simple by David Muniz and David Lesniak. If I don’t watch it, the entire blog is going to be about this book. Because I love it. It’s officially moved to the top of the list as my favorite from National Library Week this year. Buy it.

Ganache recipe, although I have played with it many a time, is taken in its original form (and written in my own words) from Momofuku Milk Bar Cookbook by Christina Tosi. And we all know how I feel about this book, so no further explanation needed.

*If you hate the thought of using corn syrup, but I’ll say to those who shun it, I shun it also, for the most part. However, in recipes like this which require a specific shine and stability, it does work the best. Use honey as a substitute and reduce it to 1 1/2 tablespoons, but your cupcakes may not stay as shiny and your texture may be a little different from mine.

Preheat the oven to 325˚F. Line a standard muffin tin with paper liners. I’m no stranger to an unpapered muffin, people; in fact, mostly I prefer them that way. However, with these you really do want the paper, I promise.

In a medium bowl, whisk together the flour, baking soda, and salt. Set aside.

In the bowl of a stand mixer fitted with the paddle attachment, beat the butter, brown sugar, and granulated sugar on high speed until fluffy and light, 3-4 minutes. Scrape down the sides of the bowl with a rubber spatula. Add the eggs and vanilla and beat on medium  for 1 minute, scraping down the bowl as needed, until fully incorporated. Add the sour cream and whole milk and beat on low for 20 seconds. Scrape down the sides and bottom of the bowl and beat on low again for another 20-30 seconds until everything is homogenous.

Remove the bowl from the stand and add the chocolate chips, using your spatula to evenly incorporate them into the dough. Really be thorough here: it’s easy to say to yourself “oh, that looks about right” when you know in your heart that it isn’t done. These muffins are great, but you want the chocolate as evenly distributed as possible; it’s critical to the final texture and flavor. Stir those chocolate chips with gusto.

Using a 2-ounce ice cream scoop, fill your muffin liners, slightly heaping your batter (this will make around 16 cupcakes, remember, so portion accordingly). Your cups will be pretty full. Bake for 20-22 minutes, checking at the 18-minute mark for doneness. The tops should feel firm and a toothpick in the center should come out mostly clean (save for melted chocolate). Cool the cupcakes in the tin on a wire rack for around 15 minutes, then remove them from the tin and back onto the wire rack to cool completely.

In a medium bowl, combine the chopped chocolate, cocoa powder, and salt. Set aside.

Combine the corn syrup, sugar, and heavy cream in a heavy-bottomed saucepan and bring to a boil over medium-high heat, stirring constantly. As soon as you see it begin to boil, remove it from the heat and pour the cream mixture over your chocolate mixture and allow to sit undisturbed for 1 minute.

Slowly begin to whisk the mixture by hand, for as long as it takes to dissolve everything together. Then pick up your speed, whisking at a decent clip and increasing your speed as you go (think of it as a cardio endurance challenge) for about 4 minutes, until your mixture is glossy and completely smooth. I say “completely” here because you will begin to get tired, and you will try to pointedly ignore the tiny granules of undissolved sugar still staring at you from the bowl. Do not leave them undissolved, people, because grainy chocolate fudge sauce does nothing for your presentation. Keep going until you can truthfully say you see no grains. Set aside.

When your cupcakes have cooled to room temperature, it’s time to dunk them. Rewarm your ganache if you need to, but you want it to be thick in consistency to adhere to the tops of your cakes, so watch overheating it. Firmly grip a cupcake by the paper, overturn into the bowl of ganache until the top is submerged (there won’t be much of a top, so dunk until you hit the paper edge). Give it a little wiggle back and forth a few times, then pull it out, keeping it face-down. Dunk it again, repeating the motion, then pull it out again, still upside-down. You’ll see the excess ganache start to drape off: to get the tops smooth, manipulate the cupcake so the draping is moving towards the center of the cake as you turn it over, which eliminates any edge runoff. Set the cupcake back on the wire rack to settle into themselves for at least an hour. The ganache won’t ever completely harden unless you put it/the finished cupcakes in the refrigerator, so leave them at room temperature until you serve them.

These should stay shiny and beautiful for at least 4 days. The ganache sort of entombs the flavors inside the cake, so it’s like its own airtight container. Nevertheless, store these in an actual airtight container for up to 4 days. They will never last unless you stand by them and swat hands 24 hours a day. Including your own hands.