It’s official: my annual brunch obsession has started. I experience this every year, and I think it’s because I begin thinking about Easter. I host it every year (party alert!) and it gets very brunchy around these parts. I know some people eschew the idea of brunch as ridiculous, but I have always been a big fan of the breakfast/lunch combo, especially when it’s well thought out and gives a nod to both meals equally. Don’t give me a bunch of lunch stuff and some eggs; alternatively, keep your full breakfast spread with some salad thrown in for good measure away from me. A good brunch should blend the best of both meals together; it’s not always to do, and that’s why my planning for Easter begins early.

My first thought: a quick bread. Pick the right one, and it pairs nicely with both breakfast and lunch options. I wanted something out of the box, so I headed for one of my first-ever cookbooks: Tyler Florence’s Real Kitchen.

Ever heard of it? It’s celebrating it’s 10-year anniversary this year. I re-found this one recently in a box of cookbooks which won’t fit on my shelves (a never-ending crisis around here) and it was a nice reminder of when I couldn’t cook anything. I purchased this in 2006, around the time when his Tyler’s Ultimate show was airing. I was just engaged and downright determined to learn how to cook.

This wasn’t the book to learn with. Everything seemed intimidating, I wanted to improvise without really knowing how yet, and I had no idea what I was doing. It was frustrating, because they were such beautiful recipes; I just wasn’t ready for them yet. Looking at the book now is like seeing it for the first time; it’s not difficult at all! His recipes are elegant and uncomplicated, and lest you dismiss Mr. Florence as some Food Network creation, he’s not; it’s easy to forget he was the executive chef at a super-buzzed-about NYC restaurant in his early twenties. He’s smart, and he likes honest food, and I love him for that. Others may snub him, but he is not to be snubbed. I’m guilty of tossing him into my “not often used” pile, but I won’t be making that mistake again; this time, I am ready.

I’ll be adding this to the cookbook library (along with my Christmas newbies) very soon. For now, I give you my version of his toasted coconut bread. It’s different, it’s inspired, and it’s lovely in that it’s a quick bread that isn’t heavy on the sweet. The flavor is less coconut daiquiri and more coconut cake; toasting the coconut gives it a deep, warm flavor and seems to take away some of the sweetness. There’s a good amount of brown sugar in here to give it a little caramel flair, and I’ve added pecans, because I think pecans and coconut are an oft-overlooked pairing. There’s pineapple juice in here, but a small amount, and mostly to level out the flavor; you may not taste it, but it provides a mellow sweetness I didn’t want to get by using additional sugar. 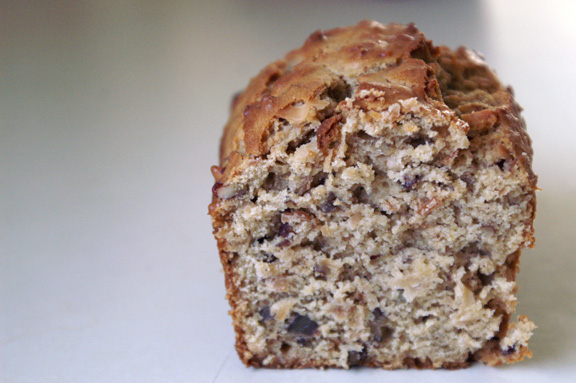 I like this best after a waiting period; I think too often we take quick breads and muffins out of the oven, hover over them until they’re cool enough, and then wolf them down. I do it frequently, which is shameful because most of them taste so much better after a cool-down to room temperature and a few hours to let their flavors settle into each other. If you make this one, try letting it rest post-bake for 12 hours; make it the evening before and warm it a little the next morning, and you’ll be rewarded with the best flavor this bread has to give. It’s a great way to manage brunch, too; making it the night before just leaves your oven free and clear for anything else you may be making.

Adapted liberally from Tyler Florence’s Real Kitchen: An Indispensible Guide for Anybody Who Likes to Cook by Tyler Florence. Watch out for cookbooks like this: I’ve noticed that for whatever reason, male chefs love brunch food, and more often than not they’ll include an entire brunch section in their cookbooks. Bobby Flay, Andrew Carmellini, the list goes on. Don’t judge a book by its lunch/dinner/savory meatfest cover.

*coconut milk and cream of coconut are not the same thing. Cream of coconut, most typically used in things like daiquiris, is sweetened and has an entirely different flavor when you use it for baking. Coconut milk, on the other hand, is unsweetened, which is what you want for this particular recipe. Typically, coconut milk can be found in any grocery store in the Asian/Thai section; I used the full-fat variety for this. Remember that coconut milk separates as it sits on a shelf: you’ll have a think creamy section and a watery section, so be sure to stir the contents in a bowl before adding to other ingredients.

Spread out your coconut evenly over the parchment. Place in the oven for a total of around 15 minutes, but set your timer according to your ability to remember things. Why? You need to pay attention to this before your 15 minutes are up.

Beginning at around the 7-8 minute mark, check your coconut. When you see the edges begin to brown, remove the pan from the oven. Using a serving spoon (my favorite for this), flip the coconut outsides inward and spread out again. Place back in the oven, and do this every 2 minutes or so until your coconut is a variegated peach/golden brown mix. Remember: coconut burns fast, so remove it as soon as you feel like it’s toasted but not yet crispy. So I don’t forget about it, I set my oven timer first for 8 minutes, then for 2-minute increments until it’s done.

In a large bowl, whisk the flour, baking powder, salt and cinnamon.

In another large bowl, whisk together the brown sugar, eggs, vanilla, and lemon zest. Add the melted butter and whisk gently to incorporate, then add the coconut milk and pineapple juice and stir until everything is homogenous.

Pour the flour mixture into the wet ingredients and fold everything together with a spatula until your batter is just combined. Gently fold in the toasted coconut and the chopped pecans and continue to stir until everything looks evenly distributed. Go slowly here and work from the bottom of the bowl up: there’s no need to rush the folding, just make every spatula motion count so you don’t overwork the batter.

Remove from the oven and transfer to a wire rack to cool in the pan for about 30 minutes. When the bread is cool enough to handle, remove the loaves and let cool completely (!) before slicing. If it were me and if you want the best flavor from this, once your bread has cooled completely, place in an airtight container for around 12 hours to let the flavors mesh. Serve at room temperature or lightly warmed, butter or no butter.

Keeps well in an airtight container for up to 4 days.