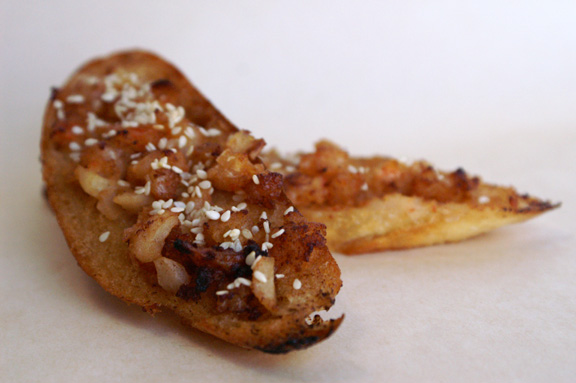 Did you know Chinese New Year is this weekend? It is; the Year of the Snake begins this Sunday, and I am mini-celebrating. Someday I’m going to throw a proper Chinese New Year party, because it seems like a great deal of fun would be had. There would be pot stickers (which i tried to make and completely botched last week), maybe some fireworks (probably illegal in February, but I’ll check) and maybe I’ll learn how to play Mahjong (because I’ve always wanted to ask someone nonchalantly if they’d like to play Mahjong and have them wonder if I’m serious, and then beat the pants off of them.)

Where does this obsession with this Chinese holiday come from? Probably my childhood. I think I’ve told you a little about this before, but when I was in elementary school, one of my best friends was named Amy. She was Chinese. My mom and her mom were very good friends also, and our moms did lots of things together, including catering for school events and private parties. Evidently there was a high demand for authentic Chinese cuisine around here, so Amy’s mom taught my mom how to do it. Obviously for Amy and her family, this type of food was nothing exotic; when I’d go to her house after school, we’d have fresh wontons for snacks. Their house perpetually smelled of cooking oil and egg roll wrappers. Rather than grilled cheese for dinner, we’d have batch upon batch of perfectly cooked pot stickers. I remember one night in particular, when Amy and I decided we wanted to do “fancy night out,” so her mom let us dress up in kimonos and she made us Peking Duck for dinner.

Peking Duck while wearing an authentic kimono. With candles. In the dining room. I was like, 8 years old, and that’s what we wanted to do for fun on a Friday night. If anyone were to ask me how I got into food, it’s due to things like this. I had a pretty magical childhood, and it certainly wasn’t due to having it easy. My mom worked extraordinarily hard to give us memories like this, and I’ve come to appreciate that more and more as the years go by. Creativity and imagination will get you just as far, and perhaps even farther, than money can, in my opinion.

So you see that my exposure to Chinese culture (not just the food; I would go to church with them occasionally on Sundays to the Chinese Gospel church, and then out to lunch after; so much fun) and authentic cuisine happened both early and often in my life, and I feel as though I am naturally drawn to it. I’m still learning how to do it the way Amy and her mom did, and it’s one of my projects for this year, even if it’s just for personal use. At some point I’ll master (and share) the perfect pot sticker, just like Amy’s mom used to make us, but that may take a little bit.

In honor of the festivities this year, I’ve made you two recipes: this is the first. It’s a classic shrimp toast. Have you ever seen them on your takeout menu and been tempted to order it? I have always wanted to, but there are some things I simply don’t trust to run-of-the-mill takeout places; seafood is one of those things. Also, I can’t quite work through how you’d transport shrimp toast and have it be any good once it got to its destination, right? It’s hot toast, so one should try to eat that as soon as it comes out of the oven.

Now you can! And you know it’ll be delicious, because you made it yourself. I made these the other day, and they inadvertently became my lunch; as it turns out, they’re the equivalent of potato chips, because you actually can’t eat just one. Shrimp toast is delightful, because it’s made very differently than how you would make a crostini-style appetizer – no toasting the bread beforehand. Rather, you fry the whole thing face-down and finish them in the oven. Lest you think it sounds like a hassle, the whole oven-finishing makes it easy to break out a whole sheet pan full at one time.

Another bonus: you don’t have to make these just for Chinese New Year. It seems like during the 50’s and 60’s, Asian cuisine had a little heyday here in the States and was very chic for parties. if you have a retro/Mad Men-style soiree, I’d add these to your menu.

I adapted the cooking directions more than the actual ingredients on this one, as my first batch was a bit of a disaster. The original instructions have you mixing all the shrimp butter with the shrimp topping, spreading the entire thing on bread slices, and placing upside down to fry. Do you know what happens when you don’t have enough butter to adhere the shrimp mixture to the bread? Right; you holding an empty piece of fried toast while staring at your shrimp-filled pan. By spreading a thin layer the shrimp butter onto your toast prior to mixing the rest into the salad, it gives the salad more to stick to, thus allowing your toast to come out of the frying pan as it entered; intact. You may have a piece fall here and there, but that’s okay; just pick it up and set it back on top before oven time.

This recipe makes 12-16 individual toasts, but it’s nothing to double or triple the recipe. Things like this are decidedly not like baking in that you won’t ruin anything by making multiple batches at once.

Adapted from Food & Wine Annual Cookbook: An Entire Year of Recipes 2007 by the editors at Food & Wine Magazine. Did you notice this time it said “2007” instead of my usual 2006 version? Yes, people: to celebrate the New Year, I bought myself 2 back issues of my beloved cookbooks. These must be some sort of secret treasure, because you can get 2008 and earlier for basically nothing on Amazon.com, and it’s hands-down one of the best cookbook purchases you can make. I should devote an entire post to how much I mean that.

Preheat oven to 450˚F. Get out a lipped sheet pan, and line it with aluminum foil (not necessary, but if you want to spend less time cleaning your pan, this is a good idea)

In the bowl of a food processor, combine half the shrimp with the 4 tablespoons butter and process until puréed and homogenous.

With a butter knife, spread each of your baguette slices with a very thin layer of the shrimp butter. When you have finished, toss the rest of the butter in with the shrimp and water chestnut mixture and blend until combined (I used a fork and pressed out any butter lumps as I went; the closer your mixture is to room temperature, the easier this will go for you.) Spread about a tablespoon of the mixture onto each of your bread slices, pressing the mixture firmly into the bread.

In a large skillet, heat 1/8 inch (no more) of the vegetable oil over medium high heat until it is shimmering. Place 6-8 shrimp-topped toast slices mixture side down in your hot oil and fry over medium-high heat, until shrimp has turned pink, about 30 seconds. Using tongs (obviously, people), transfer the toasts to your prepared baking sheet, shrimp side up. Sprinkle with some of the sesame seed mixture. Repeat the process with the remaining toasts until you have a sheet full of them, then bake your toasts in the oven for about 5 minutes until the shrimp mixture is cooked through.