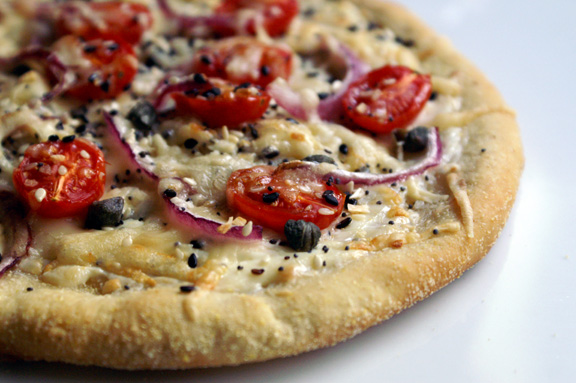 But it’s Monday, which means you deserve a Monday Bites post, and you shall have such a post. Luckily, I had a really stellar baking/cooking weekend, and it produced, among other things, this.

An everything bagel pizza.

It’s easy: I made 4 mini-pizzas out of this, and I think this works well to achieve the “bagel” effect (higher crust-to-insides ratio). If you really wanted to, you could grab some smoked salmon and throw some slices on top after baking. I used a store-bought pizza dough (my choice, but feel free to make your own), the Momofuku everything bagel mix recipe (altered slightly for more garlic, but it’s wonderful as/is), and toppings which echoed what I love on a bagel: tomatoes, red onion, capers, cream cheese, and a little parmesan for bite and texture.

I seldom let myself indulge in the real bagel version of this: I typically need a little more protein in the morning to get me going, so it’s an occasional treat on a day where I don’t have much to do. This pizza, however, solves the problem of bread overdose: it the flavor and idea of a classically-topped bagel without the massive carb overload. I think this would be great alongside an equally classic iceberg wedge salad for lunch; it seems as if that would be a nice pairing, and very satisfying.

I have lots to get to for you: we really did have an excellent baking weekend around here. First things first, though; you’ll have the ice cream sandwiches this week, in two parts (so it’s not stunningly long, like the apple pie layer cake post.) For now, we pizza. 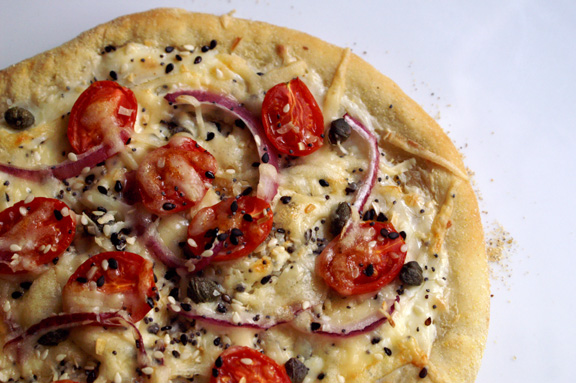 Everything Bagel Seed Mix adapted from the Momofuku Milk Bar Cookbook by Christina Tosi. Which reminds me, I still need to try and make their bagel bombs. I tabled it when my bombs, well…bombed. It wasn’t pretty.

Pizza idea inspired by Deb’s recipe in her new Smitten Kitchen Cookbook for New York Breakfast Casserole; at least, I’m pretty sure that ‘s what started this particular ball rolling. When I figured out i wanted to do a pizza version, I made myself not look at the recipe; rather, I just stared longingly at the photo. Now I can finally peek.

for the everything bagel seed mix:

Note: you can make your everything bagel seed mix a few days ahead of time, if you wish. Just make sure to store it in an airtight container until it’s time to use it. You’ll have some leftovers after you make this, so store properly until you’re ready to use it again.

If it sounds like I’m telling you what I do rather than giving you formal instructions, I am indeed doing just that. I know all of you enough to know that some of you make pizzas quite regularly, and probably have your own technique. I respect that, and I’d rather you use your own rhythm here than mine if that’s the case. If you want to try my method or even just pick and choose what you want to do, please feel free.

So difficult; toss all ingredients together into a bowl. Stir.

Store forever in an airtight container until ready to use.

Preheat your oven to 425˚F. Dust a lipless (flat-edged) sheet pan with a little cornmeal, or ready a pizza stone, which I do not possess.

Make your dough according to the directions on either your own recipe or the instructions on the store-bought dough package. Mine involves being set out at room temp for about 30 minutes, and then I get to work. I cut my dough into four equal pieces, stretch them to form small pizza rounds, and then place them on your prepared sheet pan.

I let mine rest for about 5 minutes, brush with a little olive oil (leaving around a 1/2 inch of the  perimeter oil-free) then place in the oven for 3 minutes to begin cooking the crust. Remove from the oven, poke any bubbles with a fork, and proceed with your toppings.

You’re making 4 mini-pizzas, so keep that in mind while topping. First, spread your cream cheese using the back of a serving spoon (it’s the easiest way, I’ve found, to spread cream cheese onto a semi-hot crust) evenly, leaving an outer 1/2 inch border. Sprinkle a 1/2 teaspoon of everything bagel seed mix over each pizza, then top with 1/8 cup of parmesan each. Add to each about 12-16 tomato halves, 1/2 teaspoon of capers, and a few slices of onion according to your individual taste. Sprinkle the remaining 1/8 cup each parmesan cheese overtop, and sprinkle each with 1/2 teaspoon of everything bagel seed mix.

Place back in your oven and bake for 10-12 minutes. Your pizza edges will be golden brown, your parmesan will be melted, and your cream cheese layer will be lovely and browned in places. So pretty. Remove from the oven and serve immediately.

Makes 4 mini-pizzas. If I were serving this for lunch, I’d let it hang out alongside a classic iceberg wedge salad.

recipe collections: a holiday feast and a swanky tailgate.

charred octopus salad (and a horror-level guide to defrosting) for Feast Magazine, July 2016.