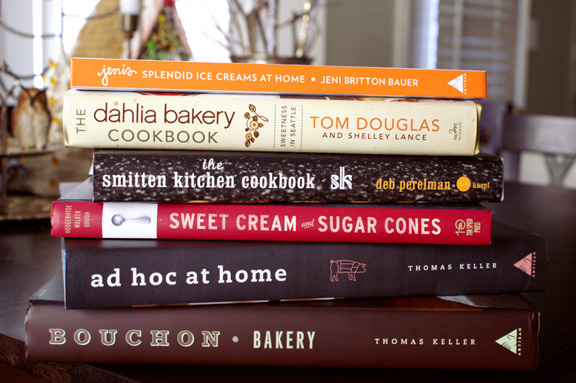 You know what the unfortunate side effect of recently acquiring two Thomas Keller cookbooks, two (two!) lauded ice cream shop books, the first (and hopefully not the last) book from the queen of food blogs, and a famous Seattle bakery cookbook is? Elation, immediately followed by a feeling of gross inadequacy. I’ve gotten used to the books I already have in my library; I’ve paged through them, cooked things, baked things, familiarized myself with their inner workings. I’m in a committed relationship with them. Sure, at first I felt all nervous and flitty, never letting them see me at anything but my best, but now? They’ve seen me in a tee and yoga pants with flour on the backside, so we’re cool with each other.

New cookbooks give me the heebies. I love them, but I get very apprehensive around them. I don’t know where my favorite recipes are lurking, because I have no favorites yet. And they’re all….so….beautiful. And the recipes are perfect in every way. What could I possibly have to add to these? I mean, come on; people actually order Jeni’s online simply because no other ice cream even comes close, Bi-Rite and Dahlia Bakery are like individual Meccas for me, Deb is the person who inspired me to start my own blog, and I’m still convinced Thomas Keller is an archangel. He’ll never admit it, but…archangel.

Here’s what books are making me all giggly-nervous inside, pictured above:

I’m asking for some help and advice here: I love every book I received, and I’m at  the stage where I want to make everything in them. I can’t do that, so I need a starting point; a “first date,” if you will. I know some of you have the same cookbooks as I do; do you have any suggestions? Anything you’d like to see me make out of any of these books? Send your thoughts my way, because it would really help me to have something to aim at. I’m a desperate woman, you see. So let’s brainstorm together.

Other points of interest (perhaps):

I told you at some point I felt chock-full of ideas this year. I still feel that way, but I’m starting to vet some of them out and determine which things I’d like to move forward with. I’m going to be working on a few new features of the blog, including:

Adding a page to the cookbooks section for my vintage cookbooks (that’s been a work in progress, but I’ll be doing it this year for sure. As it turns out, I have quite a few, and if I don’t get them posted before the next St. Louis County Library Annual Book Sale, I’ll be buried in cookbooks)

The Songstagrams Daily page: I find that most days, I have a theme song which represents what I was doing, and what type of day it was. I find snapshots of people’s days interesting, so this will be mine. I shall accompany each theme song with an Instagram snapshot which encompasses the day. I’ve kept a record since January 1st, so it’s just a matter of laying it out and updating it daily.

A Flickr Stream: This should be interesting, considering my trials and tribulations with Twitter, so it’s really anyone’s guess how that goes. If I’m lucky, it will work. Oh, let’s be honest; if I’m lucky, no one will call the authorities.

Foodie Friend Trials: Little do you all know, but I’ve been keeping track on all the recipes I’ve made from those of you with food blogs of your own. I think I’ve posted most if not all of them to Facebook, but you know how Facebook is; not everyone sees everything. Now, there’s going to be an entire section dedicated to what recipes I’ve made of yours, along with a little review of how much I liked it, and what I did to tweak it (or if I tweaked it at all.)

A Proper Blogroll: I think this has been made very clear these past few weeks, but at times, my internet problem-solving is akin to tossing spaghetti at a wall. I have tried many times to get my “blogroll” widget to work, with varying degrees of failure. In 2013, I will get it to work. Period. And when I do, undoubtably, I will forget to add people I know I mean to add. When that happens, you will email me and tell me who I was dumb enough to leave off. Deal? Deal.

So that’s what you can expect to see this year on the blog, I think. When I roll things out, I’ll be sure to include it in a post and announce it on Facebook and Twitter as well. I actually just updated my About Me page a little bit; changed the paragraphs to reflect where I’m at now, and changed the photo (because in the original photo, the Wee One was like, 6 months old.) I didn’t change the photo collage, as the very nice Scott (of Scott & Katherine at Eggton) indicated he really enjoyed the photography on that particular page. It was sweet he said that, so I left it.

I’ve said it ten billion times, but thanks for being here. I have fun with this, and I hope you do too.