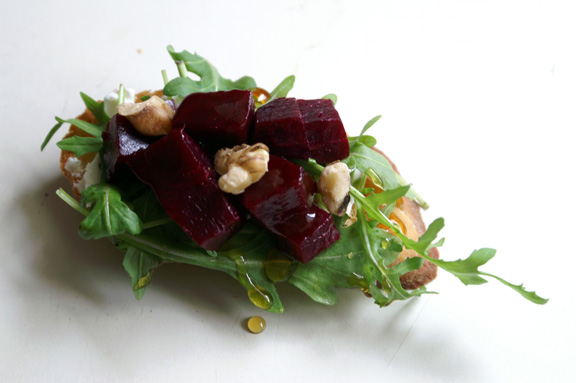 This one is dedicated to Ashley at Hops because a) I think she’s pretty spectacular, as a person and as a blogger, b) because I know she has a thing for goat cheese the likes of which few can appreciate, and she also loves beets, and c) she’s just recently engaged! And I wanted to give her something of an engagement gift. Here you go, Ashley; a toast to your engagement. Yay!

Over the holidays this year, I felt a little like I had lost my mind. Not necessarily in a bad way, but in the way that I felt I had something going on at all times. Pre-festivities, there was shopping and wrapping, and the inevitable organizing of the wrapped gifts into bags so you remember who gets what when you go to each place. I was pretty proud of myself; everything was done prior to my mom and sister arriving, which is a major accomplishment for me.

But then…chaos. Because despite me having everything organized, gatherings and the inevitable food for those gatherings seemed to take up a big part of the past few weeks. My kitchen, which is normally filled with activity, was even more wrecked than normal; I can barely tell you what I made, but I remember it was really delicious, and I ate far too much of it. My most favorite part of this chaos was what we did for New Years Eve (and maybe that’s because it marked the end of the food rush). I told you a little bit about it my lemon ginger fizz post (which I had again today, sans ginger ale, and it’s like an extremely refreshing winter sno cone – I was thrilled), but I created a toast-filled New Year’s Eve party. Toast like “raise your glass?” No way, people; toast like toast.

More specifically, we made three kinds of crostini – garlic herb, artisan sourdough, and honey wheat – and topped them with all sorts of fun things. Here’s the menu:

It was fantastic; each one of them exceeded my expectations in terms of flavor. The crab dip and tomato basil ones were favorites from a christmas party we went to, the pear/walnut is just something I love to eat, and the brie/caramel one was a riff on a brie en croûte I made years ago (pre-blog) for a New Year’s party. I’m still working on the french onion soup one; It was amazing, but I want to fine-tune it and (ahem) actually write the recipe down this time, but it really is one for the books. If you like french onion soup, you’re really going to want this for a snack/appetizer.

My favorite of the toasts? The beet one. I knew going in that it wasn’t going to be fair to the other toast creations, because beets? They are beautiful. And like brussels sprouts, an alarming amount of food bloggers worship them, and I’m one of them. They are earthy, sensuous little burgundy things; the prettiest by far of the root vegetables, in my opinion. Little known fact: in high school, I spend a year of my life with beet-colored hair. No lie. Remember Manic Panic, which you could use to dye your hair any color of the rainbow? They had a lovely one (it was either New Rose or Fuchsia Shock), and since I know they used vegetable and other semi-permanent stuff in there, one can only imagine I was putting actual beet juice in my hair.

I’m proud of that. It was gorgeous. And I know I’m a pesky semi-adult (actual adult, age-wise, but in every other way, “semi” seems to more aptly describe it) now, but every time I roast beets, I have a fleeting thought about perhaps dyeing my hair back to “roasted beet.”

So I was crazy in high school; big surprise, I’m sure. Back to the toast post.

Making a crostini bar is pretty great, for both the guests and the hostess of a party. If you plan correctly, it’s simply a matter of a little prep ahead of time, some cute dishes to arrange your topping choices on, and if needed, some flags to label what everything is. If I were to do this for a larger gathering than the three of us that were here (yes, and let’s take a moment to absorb how I felt the need to make six different layered crostini choices for three people), I would also include a little menu with suggestions for how to assemble. Certainly, there’s a mix and match aspect to some of these, and your guests can tailor them, to some degree, to what they want.

I wish I had taken photos. It’s not that I didn’t think about it, but the key word in New Year’s Eve? it’s eve. As in, late at night when there is zero natural light. Someday I will crostini bar it out for you in broad daylight, and there will be photos. For now, just let your mind wander, and zone in on the beauty that is the roasted beet crostini.

Why roasted beet crostini is great: the combination of flavors is lovely, the colors are eye-popping and very elegant, and due to the weight and textures of the combined ingredients, it stays together quite well during the few bites it takes to conquer it. Obviously your white-dress-wearing guests may hesitate to eat something with a massive amount of pigment, but give them a small plate and napkin and tell them to eat carefully, and they’ll be fine. We didn’t spill a single beet.

I also enjoy these because they’re light; the lightest crostini we had at the party, in fact. Aside from the thin layer of goat cheese, everything else is basically salad – and a good, healthy salad at that. So it’s a nice break in the action if you’re serving heavier things alongside. I know we’re in the midst of football playoff season here, so it isn’t lost on me that parties are still on the horizon for many of you. Most of those parties will involve nachos and potato skins, and other diet-busting selections. Take these along if you want to have something fun to eat that doesn’t make you feel like a quivering pile of guilt later on.

I would say these are adapted from something, but I thought of most of my crostini after some half-hearted online recipe browsing. So…inspired by the internet and its wide variety of ideas, but I can’t pinpoint it to a single source.

*crostini is about individual preferences and fun, not about exact measurements. What i’m giving you is enough so you have what you need, and you may have leftovers for some ingredients. Better that than to run out, right? Right.

**my grocery carries “half-baked” loaves, which are ideal for this. Why? Because you don’t even need to bother baking them before you slice and toast them into crostini. I find that it actually works better when you begin from a “half-baked/bake-at-home” place, as your crostini tend to hold together and not get as dry or crumby.

***you’ll use this according to the creaminess of your goat cheese, as well as your own personal feelings on how smooth it should spread. I didn’t use the cream, but if you feel like you want the goat cheese slightly less pasty, then add some in sparingly, bit by bit, until you get the consistency you want. Heavy cream works well with cheeses like this to smooth things out without altering the taste or making it runny.

So many notes! okay…so we begin:

If you roast beets regularly and prefer a given method, be my guest. For this recipe, I like scrubbing the beets, rubbing them with a little olive oil, and individually wrapping them like a baked potato. Place them on a sheet pan and roast for 1 hour. Once done, remove them from the oven and let them stay in their wrappers for another 30 minutes or so until it’s safe to unwrap them without burning yourself. Allow to cool completely to room temperature.

Preheat your oven to 400˚F (or, if you prep during the beet roast, your oven will already be hot) and line a baking sheet with aluminum foil.

Slice your loaf diagonally into 1/2 inch thick slices. Using a pastry brush, brush the foil all over with olive oil, then sprinkle lightly with sea salt and fresh ground black pepper. lay your slices out over top the oiled foil, and brush the side facing up with olive oil. Sprinkle with additional sea salt and fresh ground pepper, if desired (go easy if you’re doing both sides.)

Toast in oven for 10 minutes, checking at the 5 minute mark to see how things are going. The type of bread you use really makes the time vary, so they could be in for anywhere from 7-8 minutes to 15, depending on the density of the bread. Checking at the 5-minute mark should give you a good indication of how long it will take. Flip them over when the bottoms look toasty to allow the other side to get golden.

When fully toasted on both sides and golden brown, remove them from the oven and transfer to a cooling rack to cool completely.

Time to set up:

All you’ll need to do for DIY crostini is:

Goat cheese: plate it with a good little spreader as/is, or mix it up with a tiny bit of heavy cream to smooth it out. If you do this, it should be creamy but not runny.

Beets: Slice the skin off with a paring knife, then cut into 1/2 cubes. Place in a small serving bowl.

Your guests will want to take a crostini, smear it with a thinnish layer of goat cheese, and pat a few leaves of arugula over top so they’re attached. They can then spoon over the beets in a single layer, and scoot some walnuts in the crevices of the beet layer. A little drizzle over of honey, and they’re all set.

If you’re considering making these for yourself as a snack, totally do it. I happily ate the rest of my leftovers as a true salad (bare crostini alongside) so you won’t feel like you’re wasting anything.