That’s right, everyone; the holidays have done me in (temporarily.) It’s almost comical how much I can’t form a complete sentence. My photos look like they were taken by a drunken sea turtle. I blame my OCD-ish need for a schedule; my mom and my sister came in for Thanksgiving, then left, then came back again for Christmas and New Years. Between visits, I ran around finishing up decorating, present-obtaining, and wrapping. That’s like a whole month without my routine intact. Do you know what that does to a person who likes to do the same exact things every day?

I can’t write. I can’t focus. I made so much food over the holidays that I can’t even make food right now. So here’s what I’m going to do; I’m going to get it together. In the meantime, I will attempt to entertain you with some of my favorite things from over the holidays, before I began taking photos blindfolded. Let’s start with what my ode to designated drivers.

Confession: I did nothing for New Year’s Eve. I have in past years, and I’m not against it, but this year was snowstorm-filled, and let’s face it; driving is scary during this particular holiday, even in perfect weather. We stayed in, made a crostini bar (details to come), and happily played games and sipped this little non-alcoholic number.

I call it a fizzball. it’s so much fun to drink it deserves the name; try it once and you’ll see why. It’s bright, bubbly, and terribly chic-looking, and there’s not one drop of actual alcohol in it. I daresay you wouldn’t even miss it, because you’d be loving it so much. It’s nice to have a party and be able to offer something to the non-drinkers besides water or club soda, right? Let’s face it: the designated drivers of the world save lives, every single day. They should get to enjoy their evening as much as their tipsy friends, and this drink would make even the champagne-sippers jealous. Plus, zero cravings for greasy fast-food breakfast the next morning. Win/win.

No one likes a fussy-to-make drink; this one is easy. I don’t even have a blender, people, and I managed to make snow using my food processor and the “crushed ice” feature on my icemaker. The flavored part of this can (and indeed should) be made ahead of time; it’s comprised of a little ginger simple syrup, lemon juice, and zest. Nothing to it.

Play with the ratios all you want, and the ginger ale as well; there’s such a wide range of ginger ale strengths – from “just a hint” to “full throttle ginger” – each one will give a different taste to your finished product. I used a mild ginger ale, as I wanted it to lift the flavor of the lemon-ginger ice rather than risk covering it up. I thought my ratio of crushed ice to flavored ice also worked well; you get the hit of lemon and ginger, but it’s not going to kill your taste buds if you’re pairing it party food.

Obiously New Year’s Eve has passed, and you’d think I’d be embarrassed that I’m posting a NYE drink now. I am not. This is the perfect drink for January; it’s clean, it’s light, it’s filled with good-for-you ginger and lemons, and that means it would be perfect every day, all winter long. 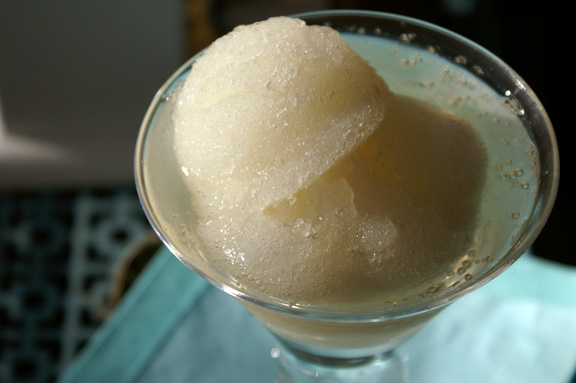 Please bear with me while I gather my writing skills and slowly get back to life as I know it. Coming soon; my favorite peanut butter cookie, and a toast post. That’s right, I said toast post, dedicated to Ashley over at Hops. She’ll know why when I post it.

Adapted from a recipe for Icy Lemon Ginger Vodka Cocktails from Food & Wine Annual Cookbook 2006: An Entire Year of Recipes. I know; my name is better, but I had fizz on my side.

Note: can you make this with alcohol? yes. For this size recipe, use a total of 2 cups of vodka, but you won’t end up with fizzballs. Instead, you’ll have a slushy frozen concoction which I’m sure is lovely. When you get to the point where you make snow from your ice cubes and frozen ginger syrup, add 1 cup vodka per half-recipe in the blender. I would imagine, due to the liquid content in this version, you’d actually want to use a blender (an overload of liquid tends to slush itself right out of a food processor; believe me, I know.) Sub one blender for one food processor.

In a small saucepan, combine the sliced ginger with the water and sugar. Over medium heat, bring to a simmer and let simmer for 5 minutes. Remove from heat and let cool for 5-10 minutes, then transfer to a (blender if you’re smart, or if you’re me, a) food processor to puree. If you use a food processor, wrap a kitchen towel around the perimeter, hold the top down firmly, hit “go,” and hope for the best. If you have an immersion blender, this would work too.

Using a fine mesh strainer, strain the syrup into a large, shallow glass baking dish; think a 9 x 13 Pyrex dish, if your freezer can handle the size. If not, use a smaller dish, but you’ll need a few extra hours for it to freeze. Cover your dish of choice and freeze the syrup for 4-6 hours until firm.

Remove the lemon ginger mixture from the freezer (it should be icy but scoopable) and let stand for 5 minutes. Scrape half the mixture into your food processor (or blender) along with 6 cups of crushed ice. Pulse until it resembles fluffy snow, using a spoon every so often to scrape down the sides.

*psst: this is where those of you choosing to make this with vodka would add 1 cup of it, but remember; blender = success. food processor probably = mess for you.

Once it is evenly chopped and snowy, use a large ice cream scoop to scoop snowballs out, pressing against the sides of your machine of choice so you have big, round snow. Place in martini glasses, and make enough snowballs in each one to pile above the rim, like a super-sophisticated ice cream cone. Pour ginger ale slowly around the sides and over top the snowball pile, filling the glass.

Serve immediately, probably with cute drink picks or tiny straws so your guests can stir it up a little, slushie-style.

Each half-batch you whiz up makes 6-8 glasses, depending on the size of your snowballs, for a total of 12-16 servings per whole batch.