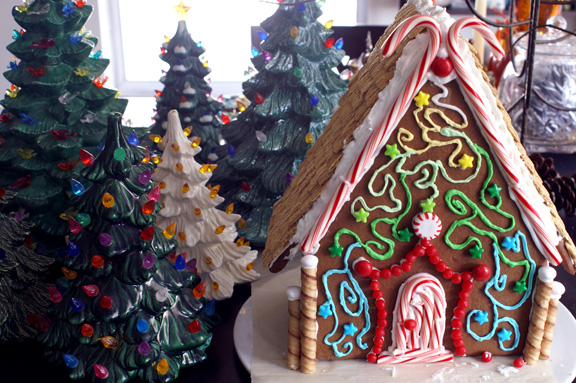 We’ve been talking about this, but obviously I have entered Movita Beaucoup’s Ginger 2012 Competition. I have little to no experience making gingerbread houses. We used to do them every so often in school (with graham crackers and candy) but I haven’t ever made an actual one by myself. To summarize: I don’t know what I’m doing.

But someone in my family does. My mother.

I asked her to help me make my ginger structure over Thanksgiving. I just thought two sets of hands would be better than one when trying to affix large slabs of baked goods to each other, at precarious angles. And mom loves being asked to help. No big deal, right? Just a little mother/daughter gingerbreading over the holidays.

As it turns out, I blocked a few things from my childhood; barred them forever from my memory. No sooner did we slide that baking sheet in the oven did those memories come rushing back.

My mom is a Ginger Ninja.

See that? That’s a scale model gingerbread replica of my elementary school. Mom thought it would be “fun” to make that one year for my teacher. 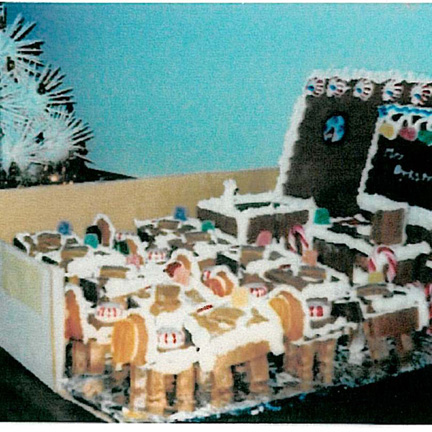 Oh, and that? That’s my first grade classroom. I think you’re getting my drift. I had completely forgotten about all of this.

Were I to have remembered this, I’m not sure I would have asked for her help. Maybe I would have. Either way, now I have something new to block from my memory; the night we made the ginger houses. I’ll spare you the details, except to say there was more shouting, and sweat, and tears than typically exist in my kitchen. Or during, say, a civil war.

But it got done. And then it sat. and sat.

Because if there’s any genetic trait I’ve inherited from the Ginger Ninja, it’s procrastination. Sure, we like to make detailed architectural models out of cookies and candy, but we like to do it under the most stress imaginable. We live for it. It makes us better. And so, to carry on the traditions of my family, i chose to decorate my house the day it was due. 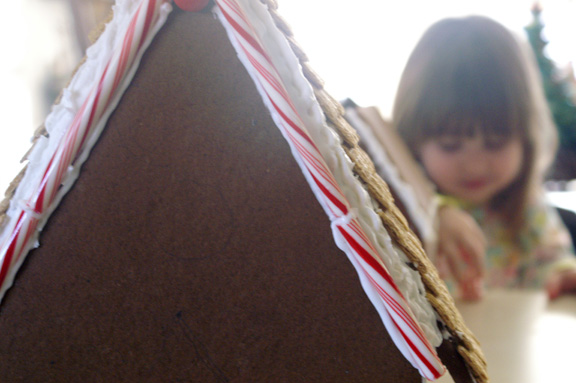 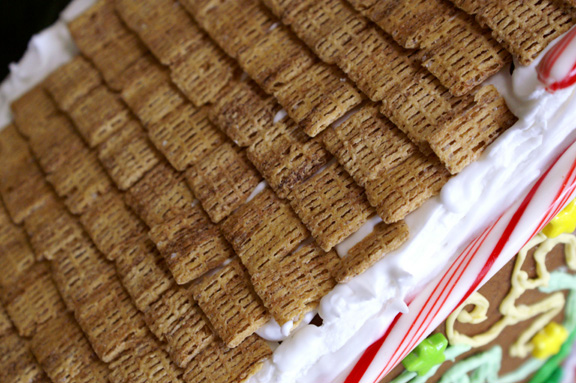 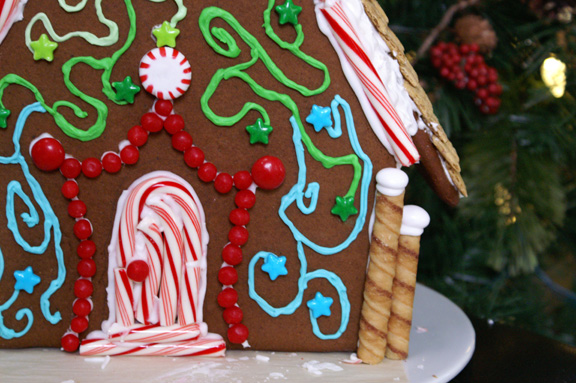 I agonized. I fretted. I messaged Katherine at Eggton for moral support, only to find out she had overdosed on strawberry Starburst candies right about the same time as I was getting buzzed from all the royal icing (contact high.) We fretted together; a bond was formed. She’s a procrastinator too. It was not looking good. 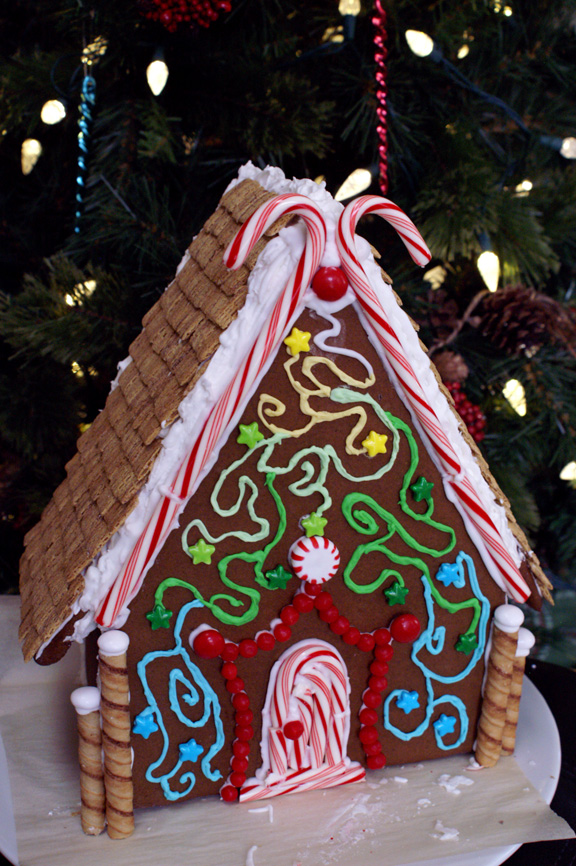 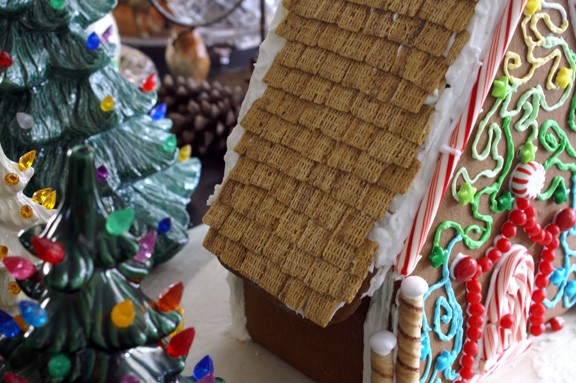 But then: i finished. and I felt so proud. I thought “okay; this isn’t so bad. Cute, even. Quaint; not the historically accurate Swiss chalet I had envisioned, but still pretty nice.”

Meanwhile, I had set up a little gingerbread house action for the Wee One, thinking she would like to do the same thing I was doing. I had no idea the genetics were so strong at such a young age. 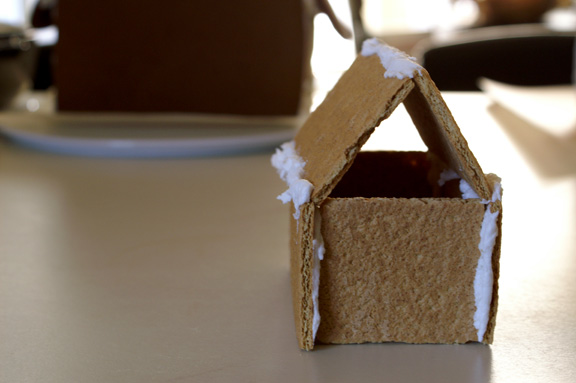 Because she produced this: a structural ode to her favorite treat cereals. I liked that she chose to stick with a theme. No mixed media for this toddler; she’s a purist. 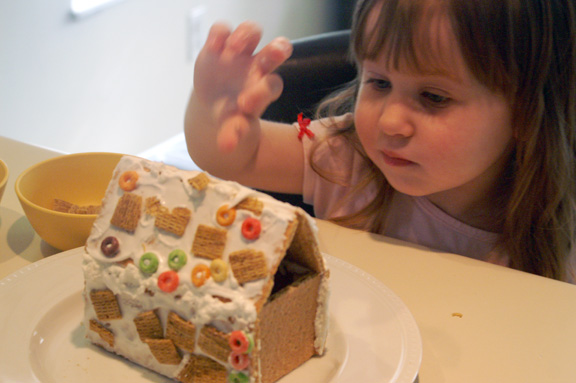 So I submitted my Ginger 2012 entry, and the Wee One’s entry (yes, she’s competing too), feeling pretty good about our odds of winning.

And then I checked Google reader Wednesday morning.

Now, in Movita Beaucoup competitions, there are some really excellent competitors. And although I’ve had my booty handed to me by a ‘tween during Bake My Cake 2012 (Hi, Elsa!) and didn’t even make it to the finals in Pumpkin Carve-Off 2012, I’d like to think I’m decent competition.

Not this time, friends; not this time. When started reading through the other entries, I knew not even the magic of the Ginger Ninja could save me, because my unassuming little Ginger chalet would be competing against the flipping Ginger Buckingham Palace, sweeping ginger lighthouses, and an entire miniature ginger village shoved inside of a glass.

And that’s only if it wins. You see, that was just Groups 1-3. I’m in Group 6 today. The post is up now; I’ve been cuddled under a blanket with my coffee waiting for it. Silver lining? I’m competing with some of my favorite people on earth; The Katherine/Scott duo, Scott’s sister, Movita herself, and my own daughter. So it’s a pretty awesome group, full of people who are probably capable on some level of creating an entire ginger community, but who would much rather kick back, drink some wine, and wait until the last possible second to produce anything. How do you think we all ended up in the last group together? Movita places people into groups based on the order in which the entries are received. You do the math.

And so I ask you for your vote. Although, here’s the thing: my sweet Wee One made a house, so I’m mostly asking you to vote for her. Because she’s adorable, her little cereal house is her first real big art project, and this is her first competition. Also, can you imagine how baffled the ginger Buckingham Palace creators will be when a two-year old smokes them in a ginger battle? They’ll probably retire from the sport.

So please vote today. Please? Mostly, I want to see our ginger-hovels kick the pants off of actual, professional work, and I know you do too. Vote for the Wee One, or vote for me. I’m voting for the Wee One, because I at least want to tell her she totally made it to the finals. She would be stoked.  We are in Group 6, and the poll is at the bottom of the post. Also, feel free to make this totally viral; I bet any one of you has more friends than I do. Let’s win this, somehow. Certainly it’s not going to be with talent, so let’s let it be with the purity that is the popular vote. Go now: to the voting booths. To Twitter. To wherever you actually need to be today. I will keep you updated on Facebook so you know how the hovels are faring.

Thank you, albeit ahead of time. You all are the best, anyway, but certainly in times like these, I find you particularly adorable.