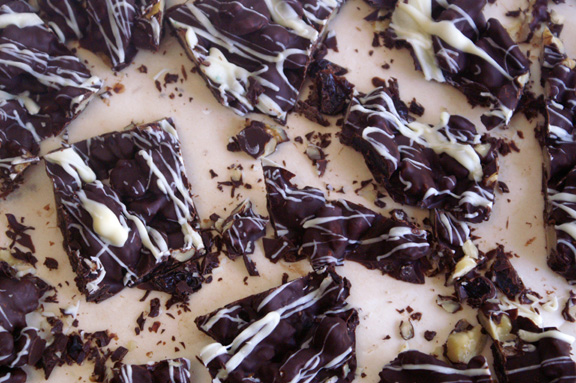 I had big plans for this weekend. Homemade pizza and kid movie night, lots of food-gift baking (finally, right?), perfecting a few recipes so I can put them on here, a little gingerbread house decorating. You know; normal holiday stuff.
But then this happened.
And things seemed a long way from normal. I tend to be an emotional person. I don’t burst into tears constantly, or act strangely, but I do find myself feeling things in a pretty deep way. I take things seriously; mom says I’ve always been a serious person, even as a child. I think, I ponder, I mull things over until I have sufficiently rolled them around in my brain and sorted them out. Those character traits do me no favors when events like this happens.

So I spent my weekend a little differently than planned. I had to; my emotions kept getting in the way, regardless of whether the television was on with updates to the story or not. Mr. Table asked me to look through some accent chairs online for our bedroom and pick one I liked; I broke down several times as I flipped through seating options. It was a struggle to get through what is normally a joyful weekend grocery shopping excursion. The Wee One always comes with, and is a delightful companion to have (she’s always liked shopping trips of any sort). This time, her very average “Mom, can I have some goldfish crackers? Would you like one?” asked in her sweet little voice with her bright little smile made tears spring to my eyes. People may have wondered why I kept stroking her hair, or would stop to hug her periodically. Or maybe they didn’t wonder at all.

Events like this make you feel vaguely to acutely unsafe. Rattled. Frozen. Unsettled. Helpless. As if there’s nothing – short of never leaving the house, ever, and even then, you never know – which is guaranteed to keep you and yours safe from harm. My daily trip to a market where I know everyone turned into me thinking that if something like that could happen at a sleepy, small town elementary school, it could happen here. And it could. It all gets to be too much. I ended up with what was a much-anticipated headache, and a need to take a break from things. It’s all so much to get caught up in, and my thoughts won’t let it go.

To take my mind off evil, and maybe yours too, if only for a minute or two, I’m going to tell you about something which happened earlier in the week. There’s been an absolute flurry of boxes coming to the house, from three generations of my family, none of which I’m allowed to open. Since they’re out of town and come in for the holidays, they order some of their gifts online and just send them to me for safekeeping. I can’t touch any of the boxes, for fear I see my own gifts ahead of time. We had a scuttle the other day where 4 different deliveries came and I couldn’t figure out which packages belonged to whom. After lengthy text research between the three of us, I was left with one box no one laid claim to. It had my name on it, yet I had not ordered it. Neither did Mr. Table, and I don’t think the Wee One can use the internet yet (although it won’t surprise me when mystery packages begin arriving from Land of Nod someday, but we’ll cross that bridge when we get to it.)

So I opened it. No harm, right? At worst, it was a christmas present for me and I would ruin this one surprise. But then I saw it.

The Bouchon Bakery Cookbook. I had told not a soul that I wanted it, except for one person who had asked me for christmas ideas. I make a giant cookbook list every year, and then divvy it up so no one gets duplicates. This went to the first person who asked, and it was at the top of the list. Not by chance, but on purpose. I had to have this book. So now it was in my hands, magically, but I still had no idea who sent it to me.

And then I saw the card. As it turns out, I was someone’s shoulder (or one of their shoulders; a friend shoulder) during a time in their lives when they felt overwhelmed, and exhausted, and were generally having a rough go of it. I don’t feel like I did much: a funny email here and there, asking how she was doing, apologizing for my own sporadic email absence (because if you’re ‘real life’ friends with me, you know that happens from time to time.) And as much as I didn’t know this, whatever little I did ended up helping her a lot. I knew she had touched my life with her own kind words, funny stories, limitless love for her family, and her always caring, always cheerful attitude, despite what she was dealing with.

But I did not think to send her the best cookbook in the world. And she did. And it was completely, totally unexpected. Another reason she sent it? She said she finally purchased it for herself and as soon as she began flipping through its pages, all she could think of was how much I would love this book. So she got me one. Who does that? She does that, that’s who. Because that’s exactly who she is. Expecting nothing in return. And that makes me teary, but in an entirely different way. In a way which makes me remember that we all live in a world where if we’re lucky, and if we’re right, more good exists than evil.

You read that probably assuming she’s a long-time friend of mine. She’s not; I’ve known her a year now. We don’t see each other often; in fact, I’ve never met her in person, but I talk to her all the time. She’s one of you. She’s a fellow blogger. And it’s how I feel about many of you; like I know you. We talk back and forth, share recipes, shoot the occasional email to each other, and so on. Before we all knew it, we became actual friends who help each other through stuff, whether we know it or not. So thank you for the little things; the thoughtful comments, kind words, the time you take to read my stuff. It means a lot to me. It counts, and even if it only takes a few seconds or minutes, please know that I notice.

So be mindful of others. Even strangers. A small kindness to you could mean a huge thing to someone who may be in need of it. You may never know the good you do for others, but that part doesn’t matter. It matters that you do it. That we do it. 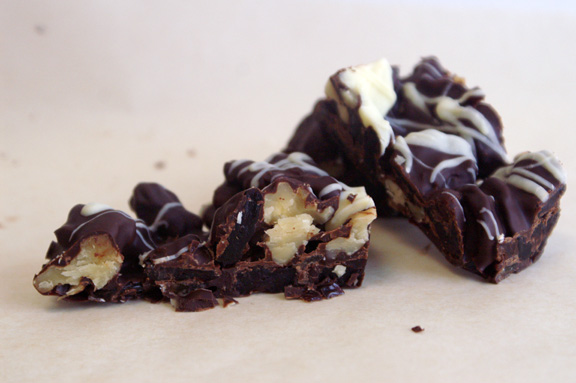 I had made this bark for you earlier in the week, when life seemed more normal. There’s a lot going on this holiday season, it seems, and none of us need much more stress. I know my own family really looks forward to chocolate bark (in all its varied forms), and it makes such an easy and beautiful gift to give that I wanted to share it with you. This is the first of two I made; the next one will be up later this week. I loved this one as it’s more of a cluster than a bark, or sits delightfully between the two. it’s got peaks and valleys and is filled with chewy dried tart cherries and big fat walnuts. My favorite part of this bark is the surprising hit of spice you get from the crystallized ginger; even the non-ginger fan will love it, so don’t be scared to include it.

Saturday night pizza and kid movie night happened, albeit with Mr. Table assisting in the pizza-making process due to an inevitable headache. I ruined some rugelah, which I will promptly set about to fixing. Ginger house? In the bag as of this afternoon, due to some much-needed support from another wonderful blogger friend (or just friend) of mine who was also ginger-housing it. Life marched forward a little. News reports are still coming; I read them and try to create a manageable distance, but some things are impossible to keep far from your mind.
Adapted from my totally useful Food & Wine Annual Cookbook: An Entire Year of Recipes 2006. I want you to know I just added several back-issues of this into my Amazon cart, and will be gifting myself with them…now.
Cherry Walnut Bark Clusters
Line a lipped sheet pan with parchment paper. I have a 10 x 13-inch “brownie pan” (basically a lipped sheet pan) I like to use for this, but if you want more space, use a half sheet pan.
In a large heatproof bowl over barely simmering water, add the chopped bittersweet chocolate and melt, stirring frequently until chocolate is smooth and completely melted. Remove from heat. In another smaller heatproof bowl, melt the white chocolate, stirring frequently until melted and smooth. Remove from heat and set aside while you prepare your bark clusters.
Alternatively, you can melt your white chocolate while you let the clusters sit for a few minutes to cool. I sometimes do this if i want to use the same chocolate bowl, but don’t want to rush around washing it out right at that second.
Stir cherries, walnuts, and ginger into the dark chocolate, tossing with a spatula until all ingredients are evenly coated and distributed within the chocolate. Pour into the middle of your prepared sheet pan and use a rubber spatula to spread the mixture out into a semi-single layer, similar to this: 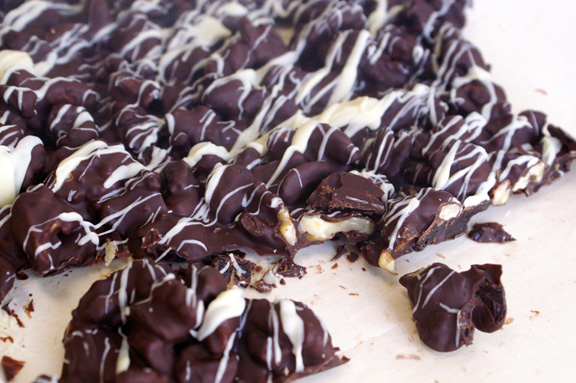 Because there’s so much in here, expect there to be clumps; this is fine, and in fact, welcome. To accomplish a “cluster-like” effect, use your spatula and point it vertically down to create small gaps between each cluster area. It doesn’t have to be perfect; you’ll be cutting this up with a sharp knife later on, but it helps in getting the clusters going and spreading the mixture out. Flattening too much from the top tends to wipe away some of the chocolate, so go slowly.
If you haven’t melted your white chocolate yet, do so now using the instructions above. If you have, take a small serving spoon or regular spoon and dip it in the melted white chocolate. Fling it back and forth in a controlled motion over the chocolate, creating little streaks of white on your finished bark. Do this to your heart’s content, and when it looks finished, transfer the pan to a shelf in your refrigerator to chill for at least 2 hours.
I think it works best to cut this into pieces, using the sections you created as rough guidelines. I like these in smallish pieces, simply because they are packed with stuff. This yields as many pieces as you choose to cut it into, but it makes roughly a flat equivalent of a 9 x 13 inch pan.
barkcherrychocolategingerholidaywalnut