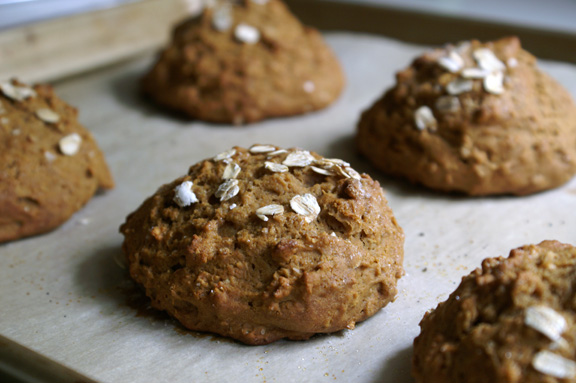 I couldn’t let the holiday go by without telling you about these rolls. Some of you know that I’m scared to attempt and subsequently fail at anything involving yeast, and I need to get over that. I’ve been working on some things which I think will help me conquer my fears, like:

One way I like to ignore my self-induced yeast willies is to make things called “bread” which don’t involve things like kneading, punching and rising. Less violent, I say. Also, I enjoy science quite a bit, and any sort of soda bread really piques my interest. If you’ve ever spent time with a soda bread recipe, it’s a little like making a dud of a science-class volcano; you can watch the baking soda react when the ingredients are all together. There’s no exploding or anything, but it’s still interesting to watch chemicals do their thing to form bread, even if there’s no yeast involved. 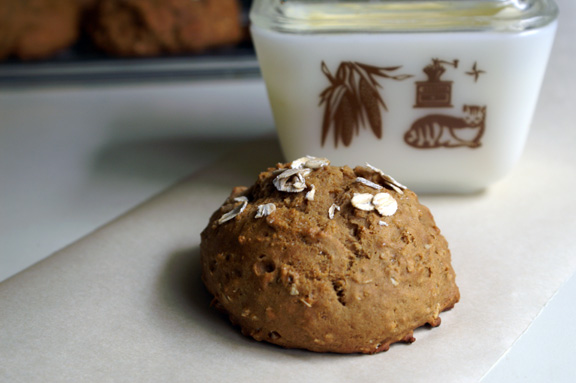 I’ve had traditional soda bread, but never one with oats and Guinness gracing the ingredient list. I could guess what flavor and texture the oats lended to it, but the Guinness? I was stumped. Obviously we all got really excited over that Espresso Guinness Chocolate cake and subsequent mini-cakes, but that was chocolate. This was Guinness all alone as a main flavor.

Result: thrilling. It tastes just like an oaty, pretzel-flavored roll. It’s fantastic hot out of the oven with some butter smeared all over it. It’s got that rich, malty flavor you get with a soft pretzel, and yet you don’t feel bad eating them for breakfast. A cross between bread and biscuit, it would make an excellent bun for some leftover turkey sandwiches. Do them open-faced, throw a little cheddar and some grainy mustard on there,  and you’re ready to hug it out with your thanksgiving leftovers. These would also make an unexpected alternative to the standard Thanksgiving dinner roll. And the prep time? Mere minutes to make. You throw things into bowls and scoop onto a baking sheet. No waiting.

My mom is here. Perhaps once we’re settled,  she can entertain my Wee One, and I can fully dedicate my brain and my hands to yeast things. Certainly we’ll be making some scratch rolls, so it’s going to happen. Until then, I offer my oaten rolls to you to eat with butter, or turkey, or both.

Update: So I wrote this post, and then had a feeling come over me that could only be described as “over myself.” And then I made a yeast thing, and it worked. I’ll share soon.

Adapted from Nigella Kitchen: Recipes from the Heart of the Home by Nigella Lawson.

In a large bowl, stir together your flour, oats, salt, and baking soda.

In a medium bowl, whisk together your Guinness, buttermilk, oil, and honey.

Add your liquids to the dry ingredients and stir with a spoon to combine. Your dough will seem very wet at first, but if you think about it, this recipe is a little bit like those fake volcanoes everyone would make in science class from baking soda. Once the soda starts to act up, it gets a thicker and holds together. It’s soda bread, so  the batter will seem heavy, but drop-able. Wait a few minutes after stirring together until you feel that it’s thick enough to start portioning out.

Using an ice cream scoop, which works marvelously for these, scoop out the batter from the bowl, flattening the open side of the scoop against the side to make a flattish bottom. Place on prepared sheet pan. As these are sticky and there are no “do-overs” in terms of resetting them, plan on 6 per half-size sheet pan, for a total of 12. Your rolls should be about 3 inches in diameter and about 1 1/2 inches high.

Sprinkle some oats over top of your rolls and bake for 12-14 minutes, checking at the 10 minute mark for doneness. They probably won’t be done then, but you’ll want to see how far along they are. Dry soda bread is lame soda bread, so be sure you don’t overbake these.

I wish I could say these lasted a long time, but as with any soda bread, they don’t. You really should try to make these the day you want to eat them, and then eat them all that day. The next day you can salvage your leftover bread with a little microwave heating, but after that, they just won’t be the same. Thankfully, they’re so easy to make, you can just whip up some more.