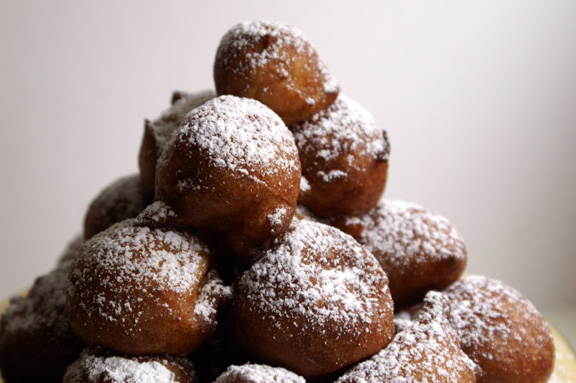 It’s unclear where ricotta doughnuts have been all my life; certainly I would have never stayed away this long had I known how amazing they were. Mom, seemingly out of nowhere, began talking about them last Christmas; this is the first time I had ever heard of them. “I have to find Aunt Dottie’s recipe for ricotta doughnuts,”  she said, like it was just some food we were all familiar with. “Mom: what are you talking about?” To which she answered, “Ricotta doughnuts! When Aunt Dottie lived in New York, she used to make them for me when I was visiting and it was cold out. She would fry some up and we’d eat them with hot chocolate. They were so good, Shannon!”

Yeah, mom; I bet they were. Now, if only my mom had thought to make me ricotta doughnuts and hot chocolate when it was cold out when I was little, instead of holding out on me for over 3 decades. Lesson = learned. I guess I just needed to get moving and make them for myself.

And so I did. Mom’s massive cookbook search last year to find the ricotta doughnut recipe my Aunt Dottie used to make was fruitless, save for one entry: Baci de Ricotta, in my beloved Feast cookbook by Nigella Lawson. We should have known it all along; of course Nigella loves ricotta doughnuts. We never got around to making them, because I was still afraid of frying and mom was probably afraid of me finding out how delicious these were. This year, I’m not as afraid of frying things. I fried up those tortilla strips for that chicken tortilla soup a few months back, so I’m slightly more confident.

Side note: now that I’m thinking about it, chalk that chicken tortilla soup up to “things I could do with my turkey leftovers this Thanksgiving.” It would totally work, and would be a lovely alternative to the usual turkey soup, if you’re into something a little spicy. 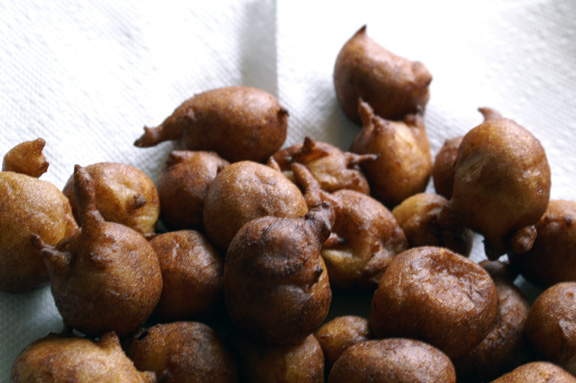 Thanksgiving seems to be a time for intermittent snacking. It’s why these doughnuts could be brilliant at your feast this year. More of a dessert doughnut than a breakfast doughnut, they’re pillowy soft and easy to throw in your mouth. They taste deceptively light and floofy, but they are satisfying for even the most epic sweet tooth. In the book, my dear Nigella seems to say that the only drawback to these is taking time out in your kitchen, away from the epicenter of your festivities, to stir together the batter and then fry them up a few at a time. I say hiding out in one’s kitchen for a few minutes of peace during the holidays frying up doughnut balls is like my version of making sand patterns in a zen garden. Relaxing, and a welcome change of pace, if only for a few minutes. 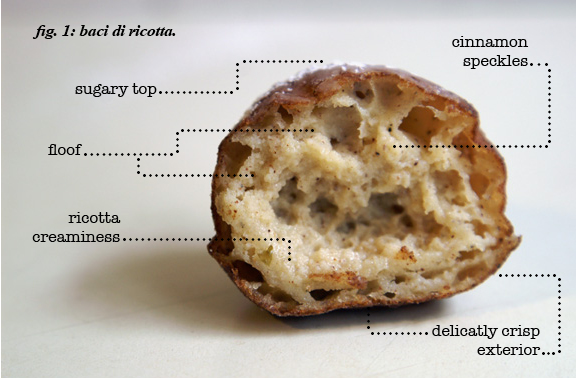 Now, I’m a total frying novice, and still have a healthy dose of fear, so I set up everything and really think it through before I begin. I don’t need to be searching for something while I’m working with flaming hot oil, and neither do you; we need to focus on the task at hand.  The doughnuts fry fast, and there’s not a ton of wiggle room, so here’s how I set up, from left to right:

My setup worked perfectly; once I had established a rhythm with things, it was easy. I think four at a time is the perfect number; once you get the fourth one in, you really should start flipping them around so they don’t darken too much on one side. The book says to let them cook, then flip once, but some actually flip on their own, so I scoop-and-dropped four batter balls, set the two spoons down, grabbed the fork, and began flipping them around and around like little cartoon blowfish. It kept their coloring even and took the guesswork out of it. When they looked finished, I grabbed the strainer and lifted them out, setting them on the paper towel plate to dry off a bit. They were perfect, and no mess was made. 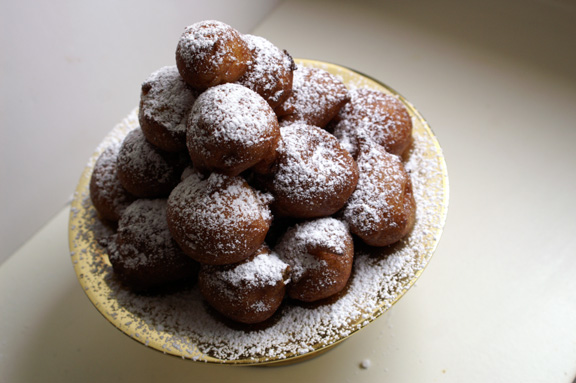 Make no mistake; these are not just fried doughballs. The ricotta cheese really makes them special, so don’t skimp out. Use a good, whole milk ricotta that you like the flavor of, and you’ll be really happy with the results. I loved the powdered sugar on these, for the flavor and that you could do it after all the donuts were done versus trying to powder them as they’re coming out of the fryer. I may try a more beignet-ish application next time and shake them up with a little cinnamon sugar, but I’d reduce the cinnamon a bit inside the doughnut batter first to balance it out a bit.

And there will be a next time, believe me.

If you like to hide in your kitchen during the holidays like I do, even for a few minutes, these are for you. And no one will see you sneak a few off the plate before you stack them up like a tree and take them out to everyone else, either.

Adapted from Feast: Food to Celebrate Life by Nigella Lawson. It’s like the cookbook equivalent of a snuggly blanket.

In a medium bowl, add your ricotta and eggs and beat with a whisk until smooth and incorporated. Stir in vanilla.

In another bowl whisk together the flour, baking powder, salt, cinnamon, granulated sugar, and nutmeg.

Add dry ingredients to wet, whisking until a smooth batter is formed and everything looks evenly distributed.

Use this time to set out your frying things. See above for a list and some tips on how to arrange things, or do it the way it seems most comfortable to you.

Fill a large, deep skillet or a Dutch oven (I sometimes prefer the latter because it seems safer) with about 3/4 inch high of vegetable oil. Heat the pan of oil until it’s hot enough to allow a drop of batter to immediately sizzle on contact.

Scoop the batter with a teaspoon, then scoot off into the oil using another teaspoon, working quickly, four at a time. Begin flipping them around from top to bottom as soon as your fourth one is down, being sure to give even exposure to all sides of your doughnut puffs. Wen they turn a deep golden brown, remove them from the pan with your long-handled strainer and set on the paper-toweled plate to cool.

Serve the minute these are done, as they really are best eaten right away. You can pile them up like a weird pyramid like I did, or you can serve them flat on a platter, or jumbled together any which way. If you’re piling them, make sure you sift powdered sugar on each layer so all the little doughnuts are evenly coated. Be generous with your sugar, as these aren’t a super-sweet doughnut.

Makes around 30 doughnuts, but I can’t say how many it would serve. I suppose it depends on who’s got the fastest hands in your gathering.

There’s no “good until” time on these; I observed these like a science experiment, and they really begin to go after a few hours or so. It’s not that they’re not delicious at that point, but rather it’s like eating real doughnuts after they’ve been out for a while – not as wonderful, and a small bit sad because you know what they used to taste like when they were fresh.