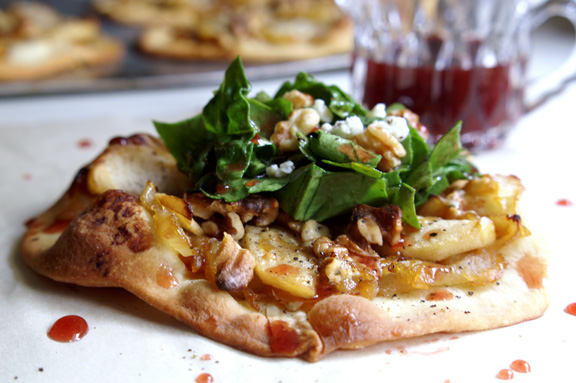 Have you ever managed to completely avoid something, or a genre of something, because you just know you’ll be terrible at it? Or rather just assumed, without bothering with the try/fail nonsense, to forgo a project based on your (imaginary) future failure? I have; I do it all the time. Think back for a minute; have you ever seen a croissant on this blog? A Danish, perhaps? Pain au chocolat? A nice loaf of thick-sliced bread, maybe dinner rolls? No? No, you haven’t. Because I’m scared of two things: yeast-based baking and failure. Because in my life, the former typically begets the latter. And I do not embrace failure with open arms. 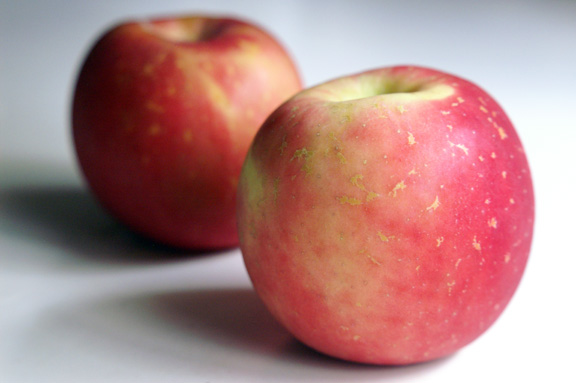 During your little mental walk-through just then, you may remember I committed to going to baking school (in a pretend way) with my dear friend Movita Beaucoup. I wasn’t actually going, no; but I was going to start in September teaching myself to do more classic pastry things like croissant and Danish dough, et cetera, in order to support her gigantic undertaking. Looking back, I had just made three types of chocolate cookies and I must have been in some chocolate-induced chemically altered state for thinking I could do that. Now time has passed, Movita is donning clogs and baking things for the public, and I haven’t made one successful attempt at pastry things. This is not to say there haven’t been attempts made; just none I’m willing to share with, oh, I don’t know…anyone. 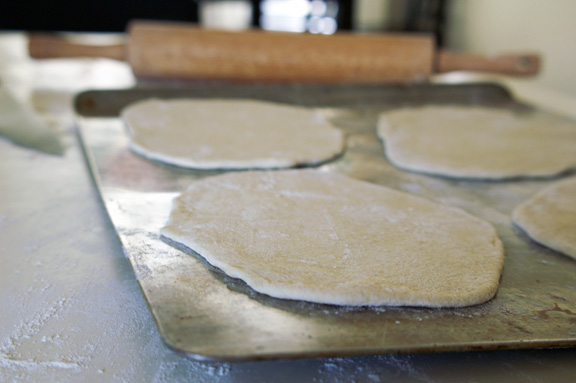 But then, she made me a sheep for my birthday. That’s right: Movita, who is in baking school, like, 15 hours a day or something, has a real job and also blogs, had time to needle me the world’s most precious sheep. Which means I need to get a grip: I need to focus on the task at hand, which is teaching myself how to not be scared of things which involve rising and/or beurrage and/or lots of flour spread out on my counter. 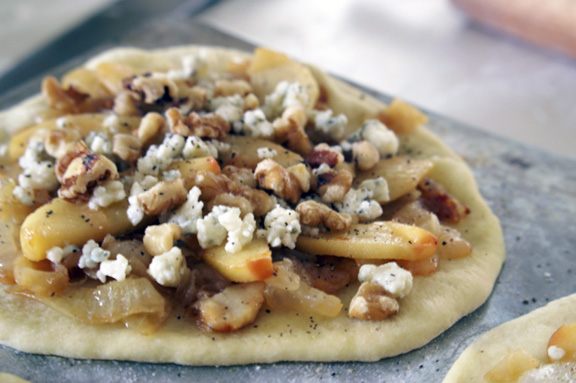 I made myself a little confidence-booster this weekend, in the form of store-bought pizza dough. Sure, I didn’t make it, but I thought if I could bring it home and manage to not kill it, I could consider it a good start. Thankfully, I didn’t kill it, which means you get an incredible recipe for  individual pizzas topped with salad.

Have you ever had one of those? Delightful. Because sometimes pizza can get too, well, flat in the flavor department. Everything melts together, and although pizza is excellent in general, it’s nice to have a little something to go along with it to brighten things up a bit. With this recipe, you get that little something right on top of the pizza; so efficient, right? I know. 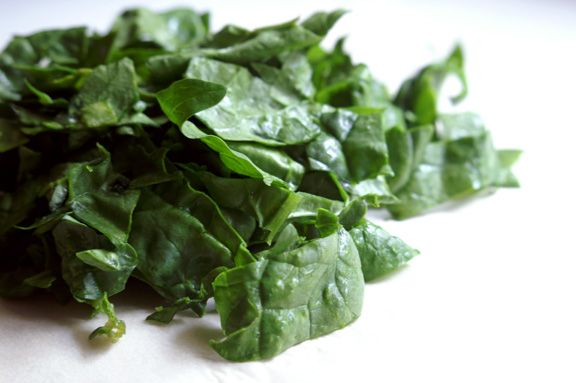 So whether you’re on Team Pizza or Team Salad, now you can be on Team Both: I took some inspiration from last year’s chopped apple salad + pomegranate vinaigrette and paired it with a recipe for blue cheese pizza in The Beekman 1802 Heirloom Cookbook. Similar ingredient profiles + a little creativity = delicious little individual pizzas topped with greens. A great fall and winter light lunch, especially with apples in season right now. Once the pomegranates are in, I’ll be using them to top this off as well. Imagine a little smattering of juice-filled seeds over this; I’m excited too. 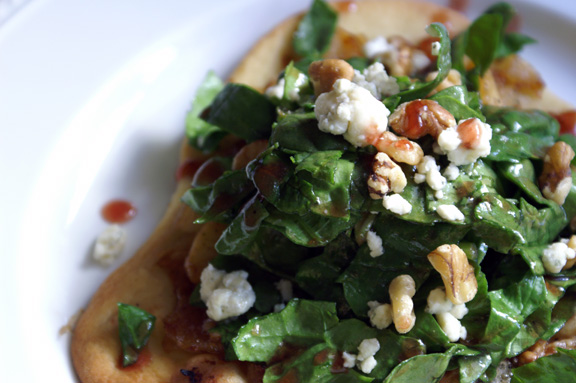 You eat this pizza and pretend, if you will, that I made from-scratch pizza dough. If you’re talented in that area, please make your own for this recipe. In the meantime, I’m going to dust myself off and work on some pastry for you. Because Movita? She breaks giant mixers all day and cries all night from exhaustion, and still she loves baking school and learning. I love learning too, so I’m going to give it another go.

Adapted and inspired by three things: My chopped apple salad + pomegranate vinaigrette from last year (originally a Bobby Flay recipe from the Bar Americain Cookbook), The blue cheese pizza recipe from The Beekman 1802 Heirloom Cookbook by Dr. Brent Ridge and Josh Kilmer-Purcell, and my intense and neer-ending love of California Pizza Kitchen’s pear and gorgonzola pizza, which – when I first had it years ago – was the first time I experienced something so bold as salad-topped pizza.

*I slice apples like an idiot; that is, until recently. When I made the apple pie layer cake for my birthday, I noticed the Momofuku cookbook gave explicit instructions as to how to chop the apples. It was like a light went off. So! take your sharp, serious knife and cut your peeled apples in half lengthwise, and cut those halves into halves. Lay them each on their side and, using a 45˚ angle, slice the core out of each quarter. Brilliant! Then slice each quarter lengthwise into 5-6 slices.

**Obviously you don’t need to make the pomegranate vinaigrette from scratch if you feel like that’s just an extra step for you. To be fair, I typically have all the ingredients for it already in my kitchen. If you’d rather purchase it, Litehouse makes an excellent Pomegranate Blueberry Vinaigrette which would serve as a good substitute. Not into pomegranates? Try the Harvest Cranberry or the Raspberry Walnut Vinaigrette. If your grocer stocks it, it will probably be in the produce section.

Cooking the apples and onions:

In a large pan, melt 2 tablespoons butter with 2 tablespoons olive oil. Toss in your onion slices, coating them with the oil, and then cook on low, covered, for 25 or so minutes until soft. Remove cover, stir, crank up the heat to medium, and cook until golden brown. This takes about 20-25 minutes, stirring occasionally. If you find your onions are taking awhile, crank up the heat to medium high and keep going; this is more about your onions being perfect and less about the exact time.

Preheat your oven to 450˚F and position your rack on the lowest rungs. You’ll want to get out a half, unlipped sheet pan.

In the meantime (or the day before), add your pomegranate juice and sugar to a small saucepan and heat to a bubble over medium-high heat, stirring until sugar has completely dissolved. Let it reduce down until you have about 1/4 cup of juice (which will now look like syrup), watching it closely towards the end so it doesn’t thicken up too much. Set aside to cool slightly, then whisk in your Dijon mustard, honey, vinegar, and olive oil until emulsified. Season with salt and pepper to taste.

If you haven’t already, shape your 4 dough balls into rough circles around 7-8 inches in diameter (see picture above). Place directly onto a baking sheet and poke each one a few times with a fork. Let rest until the dough gets a little bit of a poof to it (nothing big, but you’ll see the edges start to rise slightly), then brush with olive oil. Place in the oven and bake for 2-3 minutes, until you see your crust start to bubble a little. Mine looked like this: 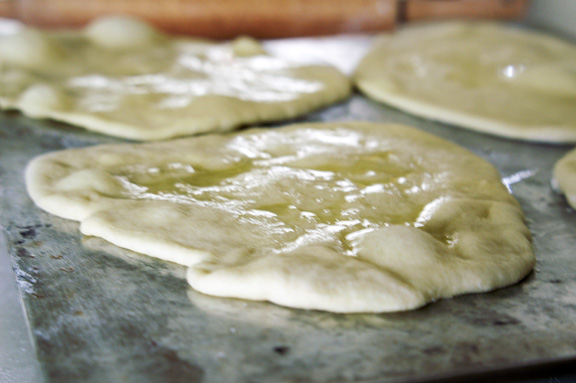 Use this time to get out/set up your pizza toppings. Make sure your onions, apples, gorgonzola, and walnuts are within reach.

Remove crusts from oven and place on a trivet, because the pan is hot and you’ll need to protect the countertop. Remember when you’re working that you’re very near a hot pan. Divide your onions equally over the four crusts, spreading out to about 1/2 inch shy of the edges. Next, divide your apples equally, in whatever fashion you choose. You can place them haphazardly, or you can make a pinwheel like I do (see photos above). Next, divide 3 ounces of the gorgonzola among the 4 pizzas, reserving about 1 ounce to sprinkle over post-bake. Finally, take 1/3 cup (or up to 1/2 cup) of walnuts and sprinkle over, reserving the rest for post-bake. Place back in the oven and bake for 12-14 minutes until crust is golden and cheese is melted, watching like a hawk after the 10-minute mark.

In the meantime, chop your spinach leaves into thick ribbons (maybe 3/4 inch wide). Place them in a bowl with a few tablespoons of the dressing and toss, then season with salt and pepper. If you’d like, place it back in the fridge until your pizzas are finished.

Remove from the oven and place sheet pan back on the trivet. Get your spinach salad, walnuts, and gorgonzola out. I let the pizzas cool for just a minute or two, then top each with a handful of dressed spinach leaves. sprinkle the remaining walnuts and gorgonzola over top each salad, then season with a little salt and pepper. Serve immediately.

Obviously, this makes 4 light-lunch servings. Whether or not you want to admit this publicly, I bet most of you could polish off two of these if you were hungry. Just saying; plan accordingly, and I won’t say anything.